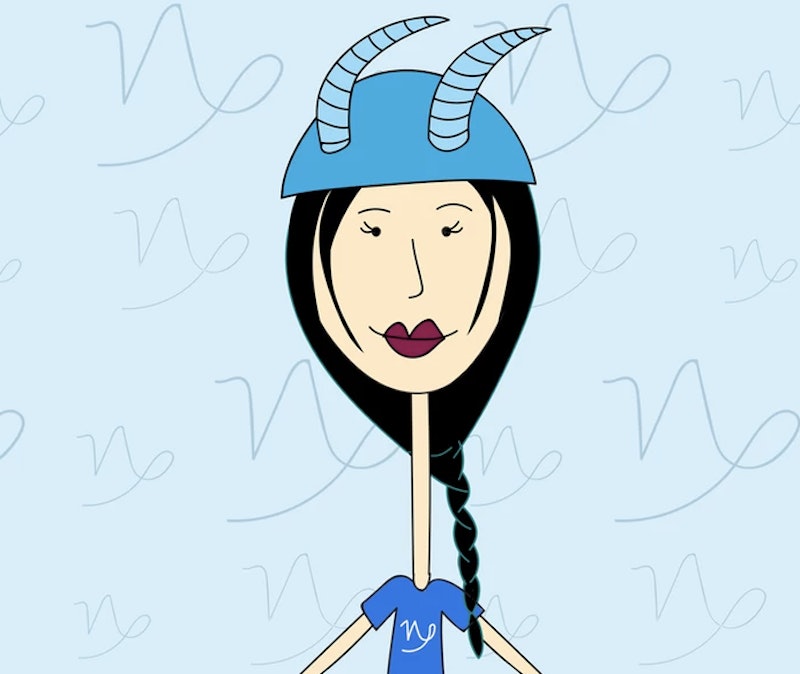 When Mercury goes retrograde on April 28, there will be five — I repeat, five — retrograde planets happening all at once. It might not seem like a big deal to some people, but to my fellow astrology geeks, it's something to pay attention to. After all, this only happens once every 10 years or so, and it can have some pretty bizarre effects on us lowly humans just trying to mind our own business here on Earth. What does five planets being retrograde mean for Capricorn? No matter what your zodiac sign, you might feel like the next few days are a little, uh, backwards, but Capricorns in particular have a few specific things to look out for.

Capricorn is an Earth sign, and to say they are determined is an understatement — when these folks put their mind to something, they get things done. Among their many enviable strengths, Capricorns are beyond disciplined, responsible, and for obvious reasons, make wonderful leaders. Some astrologists even say that of the bunch, Capricorn is the most serious zodiac sign, and people born under this sign are the epitome of professional.

That being said, things tend to feel a little backwards when a planet is retrograde — let alone when five planets are retrograde at the same time. And, for a sign like Capricorn that craves routine, it can be a bumpy time. Here's what to expect from each of the five planets that are retrograde.

Jupiter is the planet that controls finances and opportunity — two things Capricorns take very seriously. Capricorns are exceptionally practical when it comes to properly managing money and other resources, and aren't as likely as other signs to go out and mindlessly spend a huge wad of cash. When Jupiter is retrograde (and it has been since January), people of every sign might feel like they are under a slightly tighter budget than normal, but Capricorns might feel the financial stress harder than others, only because they are just so used to having these matters completely under control. The good news is, you're an expert at saving money and are beyond resourceful, so don't let the pressure get to you too much. One of your biggest assets is that you're an amazingly hard worker, so take a deep breath, keep doing what you're doing, and remember that Jupiter goes direct May 9.

When Saturn is retrograde, we become more aware of what our limitations are, and that can make many people feel insecure. But, maybe it's time for a little self-reflection, anyway. Saturn is actually Capricorn's ruling planet, meaning that of all the signs, you will feel the impact of Saturn retrograde more intensely than others. Use this opportunity to really figure out where you want to improve in the coming months, and what steps need to be taken to help you achieve your goals. If you have any half-finished projects in the works, now is the time to finish them.

OK, so Mars is a pretty... aggressive planet, and when it's on the move, it can have some interesting side effects when it comes to our energy levels. Particularly, when Mars is retrograde, many people report feeling more bedraggled, exhausted, and generally burnt out than usual. You, Capricorn, are an extremely hard worker to begin with, so make sure you aren't burning the wick at both ends. Focus on tasks you currently have on your to-do list, but don't take on any additional projects until Mars returns to normal June 29. You don't want to completely tire yourself out.

Pluto is retrograde April 18 through Sept. 26, and causes many people across the zodiac to look inwardly at what it is about themselves they would personally like to change. As a Capricorn, you are already a serious person, and are usually pretty honest with yourself about what you'd like to do better, only because you're constantly striving to be the best. Surround yourself with friends and family if you feel like you need a pep talk. They can help you realize you're on the right track.

Everyone tends to be on edge when Mercury is retrograde. Why? Because this is the planet that oversees smooth communication, and when it's retrograde, all that goes out the window. Signals get mixed up, and the time is ripe for misunderstandings. Capricorns like to prove that they're right — and to be fair, you almost always are right. But, while Mercury is retrograde (April 28 through May 22), make sure you're double checking your facts even more closely than normal before you enter any arguments. You don't want to come to any wrong conclusions.