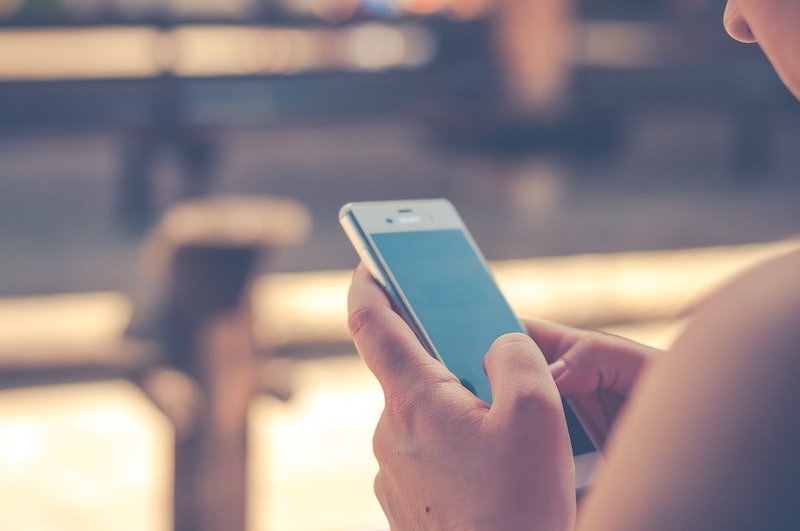 As a kid in the '90s, I had a lot of fantastical ideas of what the big 2000s were going to be like. First of all, I was sure everyone would be traveling in flying cars and talking to hologram projections of their dead relatives. And second, I was hoping we'd be able to travel into space and speak without moving out mouths. Some of these things panned out to be true — surely some people get to go to space and texting has allowed us to speak with our fingers. But the future has turned out to look a lot the same from the outside.

We're still wearing flannel shirts and listening to music on headphones and traveling in subway cars, but now we're listening to HD music through noise-cancelling headphones on high speed trains. See, from the outside we don't look all that different, even though we're quite evolved from our '90s selves.

Still, some of our innovations are so out-out-this world, we wouldn't believe that they could possibly exist in the '90s because we'd never even see a need for them to exist. And that's the thing about inventions, the best ones make our lives exponentially easier, without us even having a chance to complain about how hard it is. Then, years later, we can't believe we ever lived with out it. These are 12 ways 2016 would have totally shocked '90s kids — like, blown their minds.

We Hate Talking On The Phone

In the '90s, gabbing on the phone was a joy and a pastime. Getting a phone call would make our hearts skip with excitement. Now, when someone calls us, we roll our eyes and curse them for not texting — or assume someone's died.

I know in the '90s, I always pictured the world getting more and more serious. It seems that we have even more adult cartoons now then we did then. That, and the animation of feature length cartoons is out of this world.

In 2016, people who sit at their laptops all day, on their couch, in socks with holes, and no pants, are actually working. Because so much of the world we do now can be transmitted through email and files, many jobs don't require employees to actually show up at the office.

We Meet People From The Internet

When we first started to experiment with the internet, it was a scary and dangerous place. Meeting someone you met online was a no-no. You were bound to end up on the nightly news if you did, in a body bag. Now we do it everyday. These days it seems like most young people are more likely to find love on the internet then they are in the real world.

We Can Make Organs With 3D Printers

3-D printing has been a long time coming, but it's finally here. With innovative technology, these special printers can actually be taught how to create a functioning, living organ with natural tissue and stem cells. We can also use these same machines to print plastic toys.

We Read Books And Watch Movies On iPads

The concept of a tablet in the '90s would have been totally Jetsons. The fact that we carry around these paper-thin, wireless tablets that contain libraries of music and movies and books, would have blown anyone's mind from the '90s.

We Can Travel To Cuba

For what seemed like what would be forever, we were banned from traveling directly to Cuba. Now, finally, they've opened their gates to us again, we've resolved political issues and reinstated tourism.

Donald Trump Is Running For President

Yeah, you know, that guy with the funny hair who played a lot of golf and had smoking hot wives? He's running for president now, and it looks like he's actually going to be on the republican ticket.

Wi-Fi is maybe one of the greatest innovations of our time. The freedom to connect to cyberspace from a portable device is a massive luxury. Being on the computer doesn't mean being chained to an office chair in your parent's basement. You can play computer games and talk to strangers and search for disease symptoms anywhere now!

We Have Imaginary Butlers In Apps

With the increased advances in Wi-Fi, GPS and payment processors, developers have created thousands of apps for us to use that make our lives easier. We can order food, a foot rub, a puppy, or a home with the click of a button. It's insane.

Lots of new cars on the market run electronically. Meaning, they don't rely on gasoline to drive. They come with big plugs and where their owners hook them up to special outlets where they charge over night. They sound like toys, but they're real, adult, responsible machines of the future.

You probably thought he'd keep trying for another hit or disappear into obscurity. Well, he did a little bit of both, but now he's back on playing the role of a TV host on a home improvement show. He wears a hard hat, milks cows and get's excited about demolitions. (Not all that much has changed, if you really think about it.)

More like this
Remember These Ancient Pieces Of '90s Tech?
By Lucia Peters and Emma Carey
Instagram Users Are Reporting Issues Scrolling & Logging In
By Courtney Young
What Does “Gatekeeping” Mean On TikTok? The Viral Term, Explained.
By Courtney Young
How To Use The Shook Filter On Snapchat, TikTok, & Instagram
By Emma Carey
Get Even More From Bustle — Sign Up For The Newsletter