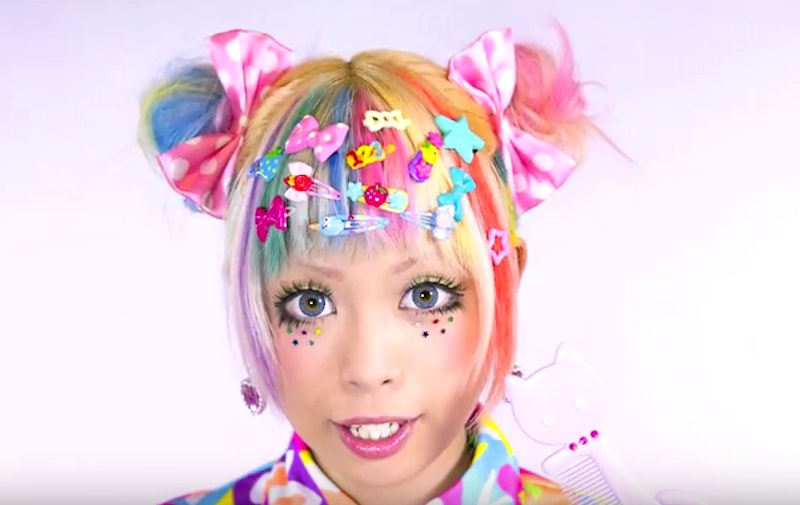 The double bun trend came back with a bang recently. Once an iconic '90s trend, worn by the likes of Gwen Stefani and Björk, the celeb sphere has gone mad for the double buns trend. In the past couple of years, the biggest double bun wearer on the block award would likely go to Miley Cyrus, as she's sported an array of space buns that would make '90s kids proud. Katy Perry is also an avid space bun supporter, she's rocked a variety of space buns while occasionally experimenting with color and FKA Twigs is known for her braided buns. Celebs who are also not satisfied with a singular bun are Vanessa Hudgens who wore loose double buns and Demi Lovato who wasn't content with just two buns, so she wore three mini buns to the iHeart Radio Festival. There are enough buns around to open up a bakery!

It appeared that the double bun trend was slowly dying out, but in fact it was just lying dormant. Coachella 2016 has seen the rise of double buns yet again. Most notably, Kendall Jenner's double buns have taken the fashion world by storm, with Katy Perry's cute pink buns not far behind. We can only hope that Harry Styles will be the next celeb to rock double man buns for real this time.

Just like bread, there are so many different varieties of buns. So here's a bunch of different double bun tutorials so you can look tasty too.

Ever wondered how to get double buns in your natural hair? All is revealed in this handy tutorial! This vlogger wears her double buns at the front, with the rest of her locks loose, which is a fresh take on '90s space buns.

This is a great style for long hair. Skip to the second look in this tutorial to discover how to get Ariana's space buns. Alternatively, watch all the looks if you're a fan of Ariana Grande and you want to know how to do her most trendy hairstyles.

Pretty up your double buns with some faux flowers for a feminine, floral look that's sublime for spring and summer.

The folks at L'Oréal show viewers how to create classic space buns that will make other millennials green with envy. The instructions are easy to follow and it's super quick if you're short on time.

5. The Buns With Bangs

If you're a babe with bangs, this tutorial could be the one for you. The vlogger shows how to get messy double buns with bangs in just over two minutes – that's a lot of bang for your buck.

According to Tokyo Fashion, the creators of this tutorial, "One of the most popular odango hairstyles in Harajuku (and with kawaii fashion fans throughout Japan) is the double buns style. In addition to being popular on the street, the double buns hairstyle is seen frequently in Japanese anime and manga (Sailor Moon anyone?)." This is a kooky, yet undoubtedly cute style for folks who are looking for statement space buns.

This vlogger traces the space buns trend back to its '90s roots in this grungy tutorial. These buns look epic on her bright pink tresses.

With the addition of some Femi Collection Kinky Twist Braid Hair, this vlogger shows how short hair can be transformed into cool space buns.

Instead of using braids to create the buns, this tutorial shows how to put a more elaborate, formal twist on the classic double bun look by braiding the hair leading up to the buns. This style would work wonders at a wedding or worn to a special event.

When you're stuck for time in the morning, this trio of space bun hairstyles, dubbed "Back To School Hairstyles" by the vlogger, will really come in handy.

Who could forget the hottest trend of the holidays? I predict the glitter roots and double buns trend to come back on the scene this year, when festival season is in full swing!

All that's left to do is pick your favorite double buns style and go to town.

More like this
Here Are All 703 Outfits Rachel Wore On Friends
By Kat George
The Holiday Theme Party You Should Throw Based On Your Zodiac Sign
By Brittany Beringer
13 Nail Art Ideas Inspired By Every Song On Taylor Swift's 'Midnights'
By Olivia Rose Ferreiro
Kumail Nanjiani & Emily V. Gordon’s Relationship Timeline Is Literally A Movie
By Jake Viswanath
Get Even More From Bustle — Sign Up For The Newsletter