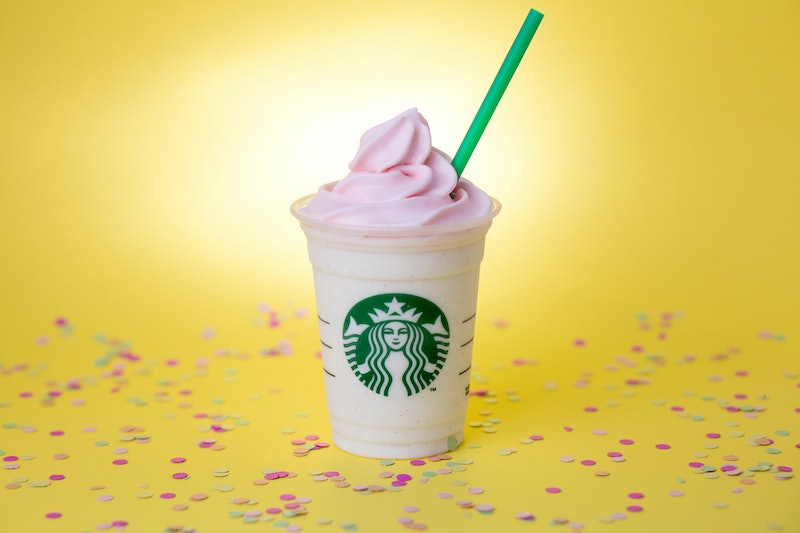 The good news just hasn’t stopped coming for Starbucks fans lately, and the triumphant return of the Starbucks Birthday Cake Frappuccino is just one more thing to celebrate. But what’s in a Starbucks Birthday Cake Frappuccino, you ask? Is it as magical as the S’mores Frappuccino, which also made its glorious way back to us just days ago? How on Earth does Starbucks manage to make blended beverages taste so darn much like baked goods and other treats, anyway? Well, I may not be able to answer the last one — the best I’ve got is “sorcery” — but at least I can tell you what goes into this party-worthy favorite.

The Birthday Cake Frappuccino first arrived last spring as a way to celebrate the Frappuccino’s 20th birthday. Available for a mere five days in March of 2015, it was such a hit that the coffee deities decided to bring it back in honor of the beverage's 21st birthday, just in time for the 2016 summer season. This year’s edition of the Birthday Cake Frappuccino is available from April 28 (that’s today, people) through May 2 — five days, just like last year — and you guys? It’s worth it. It’s totally, completely worth it.

But back to our original question: What’s in the dang thing? It’s surprisingly uncomplicated for a Starbucks special edition Frapp, but sometimes, simple is best. Let’s take a look:

1. A Vanilla Bean Crème Base

This one starts with one of Starbucks’ non-caffeinated flavors, the Vanilla Bean Crème Frapp. Basically it tastes like a vanilla milkshake. It’s awesome.

This must be where the magic happens: Somehow, blending hazelnut flavoring into a Vanilla Bean Crème Frappuccino makes it taste exactly like cake. Just, y’know, colder and a little frothier. Granted, this little trick has been on Starbucks Secret Menu for a considerable amount of time as “the Cake Batter Frappuccino,” but it’s so much more fun when it’s a birthday cake, don’t you think?

Plus, it’s the final ingredient that really takes it from regular cake to celebratory cake:

Because you can’t have a birthday cake without some colorful frosting. In this case, the frosting has been swapped out in favor of brightly-hued whip, adding the perfect finishing touch.

You can snag a Birthday Cake Frappuccino at your friendly neighborhood participating Starbucks from April 28 through May 2; prices vary depending on the market, but it'll set you back somewhere between $4.25 and $4.95 for a Tall. Happy birthday, Frappuccino, and happy un-birthday, everyone else!