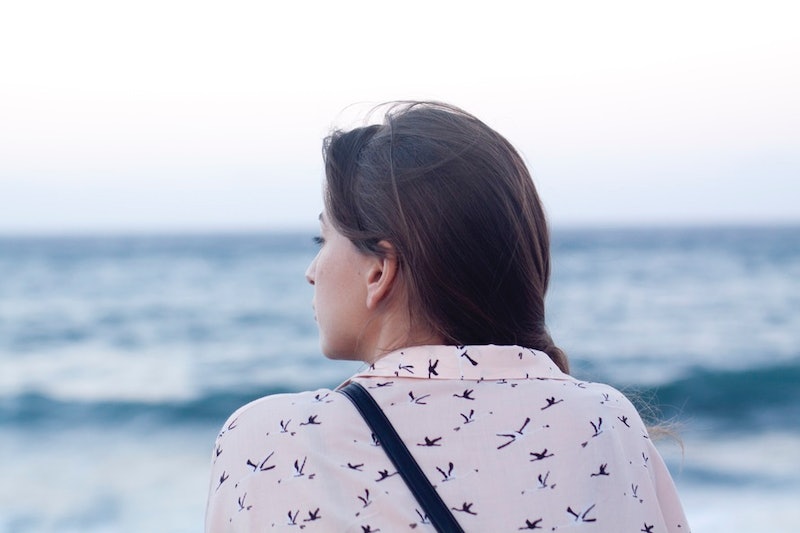 Parents can be a wonderful thing — they can guide you, help you, and support you through the wild ups and downs that is adult life. Unless, of course, they are totally toxic. When that's the case, finding ways to have less toxic relationship can become your number one life goal.

That's because few things are worse than a hateful, dramatic, or abusive home life. Even if you don't live with your parents, their toxicity can reach through phone lines, emails, and Skype calls to bring you down. According to psychologist Kim Chronister, PsyD, in an email to Bustle, signs of toxicity include a weird sense of competition, hostility, poor communication, criticism, and chaos. Basically, it totally sucks.

Toxicity can even start to wear you down, both physically and mentally. As Chronister says, "An unhealthy parent-child dynamic can lead to mental (i.e. anxiety or depression), emotional (despair, anger, guilt), and even physical complications. The mind-body connection is so powerful that suffering long-term distress from a toxic parent can lead to high blood pressure, headaches, insomnia, fatigue and more."

When it gets that bad, keep in mind that cutting your parents off is always a viable option. Hopefully it's an option that's left for the most extreme cases, but it's an option all the same.

So if you're willing to work at it, then here are some ways to have a less toxic (and maybe even healthy?) relationship with your parents.

Check Out: Adult Children of Emotionally Immature Parents: How to Heal from Distant, Rejecting, or Self-Involved Parents, $11, Amazon

1. Show A Bit Of Acceptance

The first thing to realize is that you cannot change your parents. Never, ever. They are from a different generation, and are old enough to be set in their ways, so give up that thought entirely. Instead, learn to practice acceptance. It'll make your relationship so much easier.

2. Set Up Some Boundaries, ASAP

Boundaries will let your parents know what is and isn't OK. As Padhia Avocado noted on MindBodyGreen.com, "Often, people who we feel are toxic are behaving in certain ways because we have not set a boundary with them. You have to teach people how to get along with you, by letting them know when they have hurt you or done something that feels invasive." It really can be as easy as that.

3. Learn How To Disengage Arguments

I know, arguments with parents can get heated, mostly because families know just how to get to each other. That's why it's 100 percent necessary to know how to stop an argument before it starts. According to Avocado, "A gesture as simple as touching her shoulder, and saying something like, 'I hate to see things affecting you so deeply, it seems so painful,' is highly effective because you have helped her to see her suffering in a different light while letting her know you're not becoming a part of it." Give it a try, and see if it works.

Dealing with toxic people requires a pretty hefty amount of self-awareness. "[It's] important because it involves knowing what it takes to push your buttons in order to prevent [an argument] from happening," said Drew Hendricks said on Inc. "Lack of emotional control is a great way to empower the toxic people in your life." So keep in mind what makes you mad, and then keep that anger in check.

Does your mom rant and rave until she sucks someone into her drama? Does your dad yell and act crazy until an argument ensues? Don't get sucked into the theatrics by giving into this super-obvious attention seeking behavior. As JC Axe said on Lifehack.org, "... the best course of action is to pay little or no attention to that person, and instead spend more time with the quieter and more reserved members of the group."

6. Look For The Good

Try switching up how you view your parents, and focus on their positive qualities. "Set an intention to look for the good every time you communicate with your parent," Chronister says. "This will prime your brain to be more accepting of your parent for the positive traits they hold (even if there are few)."

This one is difficult, especially if you're family is all sorts of crazy. But trust me, forgiveness feels way better than holding a grudge. According to Hendricks, "It allows you to remain unburdened by the mistakes of others and to have peace of mind. But being forgiving does not mean forgetting whom you can and cannot trust. It just means you stop wasting mental energy on those you cannot trust."

As with any relationship, a little bit of distance is key when it comes to handling parents (toxic or not). It may be difficult to cut them off, but it's entirely necessary — especially if the relationship has soured a bit. After a little bit of time, and some perspective, you can hopefully invite them back into your life.

10. Reach Out To Friends For Help

Don't deal with ridiculous amounts of toxicity alone. There are so many people who deal with the same issues on a daily basis, that you're bound to know someone who can offer advice. As Hendricks said, "There is a good chance that co-workers, team members, even family and friends have useful tips to help you get by." So be sure to reach out.

11. Get Yourself Some Therapy

If all else fails, get yourself some therapy. There's no shame in talking to a professional, and there's definitely no shame in asking your parents to come alone. It may be just what you all need to move past toxicity, and have a healthier relationship.

I'm not saying it's possible for everyone, but with a little work, you will hopefully get along better with your parents.