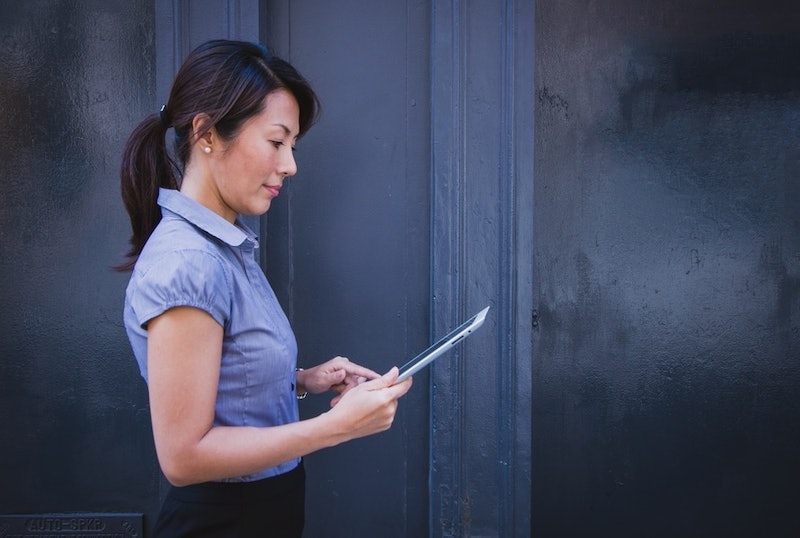 When you first get a new job, it's normal to look for ways to impress your boss. You show up early, stay late, and practically trip over yourself to get her a cup of coffee. It can quickly become a bit Andy Sachs in The Devil Wears Prada.

Of course I hope your life isn't quite that movie-level dramatic, but it is still a good idea to try your hardest to impress the higher ups. After all, your boss is the person who holds the proverbial keys to your future. He or she is the one who can offer a you a raise, a promotion, or more challenging work — basically all the things you kinda want in a career you love. So it makes a hell of a lot of sense to make them happy at every turn.

I know, this sounds like it may take stooping to disgusting levels of suck up-ery. And yes, it can easily get out of control (especially if you're boss is legendarily difficult.) But don't let any of that discourage you. Impressing your boss, and thus getting ahead at work, simply means asking questions, being friendly, and participating as much as you can.

So don't be afraid to be amazing, hardworking, and impressive. Your boss will notice, and you will have an easier time in your career. Here are some ways to do just that.

I know, it can be tempting, and sometimes necessary, to rush past your boss's office in a mad dash to your desk. But do take the time to at least say good morning, and then find time later to stop by for a chat. "Assuming she’s not deep in the middle of a time-sensitive task, pop in and ask how her weekend was or if she’s read a recent article that’s relevant to your work (offer to send it to her if she hasn’t)," suggested Meredith Lepore on FastCompany.com. "It’s an easy way to stay top-of-mind."

And no, not their outfit. (That's just plain creepy.) What I mean is, copy his or her work style when it comes to how they complete projects, sends emails, etc. "For example, does she like to keep emails brief? Don't send her messages that are five paragraphs long. Is she a big-picture kind of woman? Offer details in a way that emphasizes their relevance to the company's larger mission," said Meghan Rabbit on Women's Health. It'll keep you both on the same page, and he or she will probably greatly appreciate it.

Nothing makes you look more on-the-ball than jotting down notes during a meeting. It shows you are taking initiative, paying attention, and caring about every last detail. The studious approach can also shorten the learning curve and keep you from having to ask about something only hours or days later, according to Aaron Guerrero on Money.USNews.com. This can make you look pretty bad, so do what you can to avoid it.

4. Ask For Some Critical Feedback

OK, this one is tough, because feedback (especially if it's negative) is often hard to take. But you should still take the time to schedule a meeting with your boss to go over your job performance. As Sara McCord said on TheMuse.com, "Asking your boss to identify your areas for improvement forces him or her to take an inventory of your work as whole — including everything you’re getting right. Moreover, if there’s something specific you’re doing wrong, you’ll know. And, the sooner you do, the sooner you can make a change." It's win-win for everybody.

Find out how your boss got to where he or she is today. (What were their early days like? What did it take to move up in the company?) Then try to emulate those days. As Rabbitt said, "Focus in on how your boss paid her dues and be willing to do the same ... if your manager likes to reminisce about how she took on the most heinous shifts when she first started out, you might volunteer for a few graveyard hours each month." Hopefully she'll see her same work ethic in you, and be mighty impressed.

6. Work Outside Your Role

Go above and beyond your usual work, and always be willing to take on projects outside your role. As Guerrero said, "If offered the opportunity to work on a project outside your job description, take it. Surprised by your penchant for quick learning and versatility as a worker, your boss may start pondering your potential in a management role." Before you know it, you'll be kicking back in a corner office.

7. Listen To What They Have To Say

Don't get in the habit of zoning your boss out, even though I bet they drone on for ages. Instead, do quite the opposite. As Lepore said, "Whenever you ask your boss a question, whether it’s work-related or about the latest presidential debate, really listen to what they have to say." This will show you're engaged, which may help you stand out from your phone-gazing, zoned out coworkers.

You are bound to make mistakes here and there, so don't sweat it. Just be sure to admit the problem, and then handle the situation immediately, Guerrero suggested. Honesty will look way better than trying to cover up the problem, or worse, blaming it on someone else.

It can be tough to impress a boss, especially if he or she is all cold shoulder-y and distant. That's when the "fake it until you make it" mentality can work in your favor. As McCord said,"Before you go into a meeting, visualize him or her nodding and giving you positive feedback. Those good feelings will make you speak more confidently and smile more, which will in turn help you make a great impression."

It's fine to occasionally say no to your boss, especially if you're feeling overwhelmed. (Just be honest with them about it.) It's also OK to turn down work requests from others. As Rabbitt noted, turning down colleagues' requests to work on things that aren't all that meaningful to your boss will help them see that you're focused on their needs. And what could be more impressive than that?

Lateness is the one thing that can magically erase all of your hard work. It doesn't matter if you're the friendliest, hardest-working employee who ever lived — if you show up late, that's all your boss will see. I'm sure this is tough news for the chronically late, but definitely something worth working on if you want to make a good impression.

Some bosses are hardest to impress then others, but I highly suggest trying your best to do so. An impressed boss is a happy boss, and one that will promote you, give you raises, and make your professional life far better. I promise it's totally worth it.

More like this
Black Women's Equal Pay Day Highlights An Upsetting Problem
By Brandi Neal
The Spiritual Meaning Of Angel Number 000, Explained
By Kristine Fellizar
10 Stranger Things-Inspired Halloween Costumes For True Fans
By Emma Carey
Bobby Berk Explains How To Maximize Every Inch Of Your Bedroom Storage
By Marilyn La Jeunesse
Get Even More From Bustle — Sign Up For The Newsletter