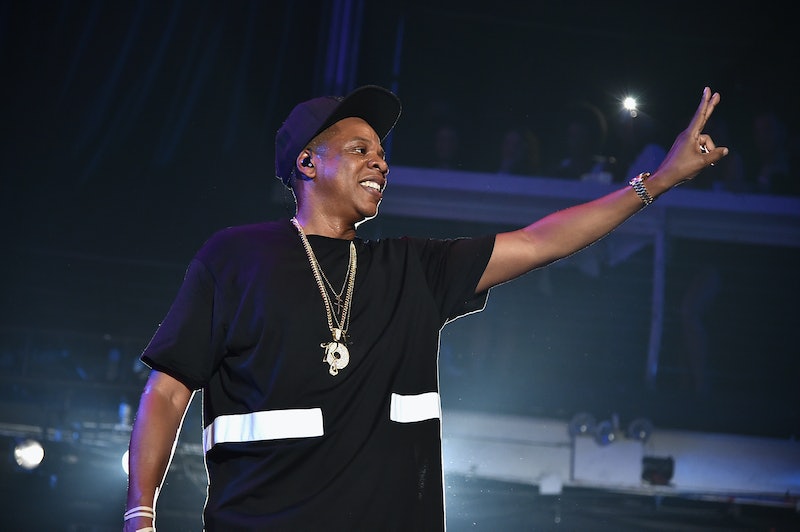 Ever since the premiere of Beyoncé's Lemonade, everybody is talking about the Carters. Thanks to some cryptic lyrics, old rumors about their relationship became new again, and I can't help but think that if they could speak directly to their fans, it may help clear things up. Considering social media has become one of the Kardashians' favorite ways to set the record straight, now is a solid time to ask: Is Jay Z on Snapchat? Sadly, the answer appears to be no. Both he and Bey are not on the app, but if anything, there's been no better time to join. It could be the perfect way to change the conversation.

Although it's disappointing to hear that he's not on Snap, he's not the biggest social media user to begin with. This means it shouldn't be too surprising. To say Jay Z uses his Twitter account sporadically would be an understatement. A majority of his infrequent posts are about his music-streaming service, TIDAL. And despite some fake accounts with his name on Instagram, it looks like none are verified or actually him. That means the only way for fans to really get access to Jay is through his music, or occasional tweets. At least he sometimes makes a cameo in Bey's Instagrams.

Funny enough, he isn't even super familiar with what Snapchat is. Back in February, Usher tried to get Jay Z and Beyoncé to pose for a video. "I don't even know what that means," Jay scoffs. He made the rookie mistake of posing for a video as if it was a photo. (It's OK! Who hasn't done that?) Based on that embarrassment alone, perhaps he swore off Snapchat forever.

According to Entertainment Tonight, Jay Z previously appeared on DJ Khaled's Snapchat. While Khaled is no stranger to the world of Snap, once again, the "Empire State Of Mind" rapper appears utterly confused.

I'm sorry to laugh at you, Jay. But he just looks at the camera and says nothing. It's almost like he's too good for the app and can't get caught up in its nonsense. I'm betting on this explanation — or maybe he just doesn't have the time to care or keep up with technology.

Considering he's a businessman, rapper, and a father, he's got a lot on his plate. But if he does want to download Snapchat and give fans a behind-the-scenes look at Bey's Formation tour, he will automatically become my favorite person on the app.