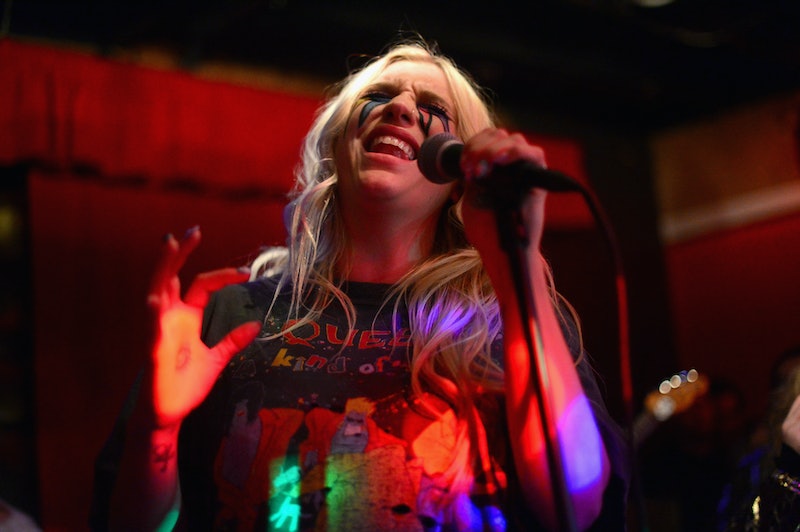 Kesha's long-awaited return to the music industry is finally here: Kesha and Zedd's "True Colors" has been released. It's the first song from Kesha since 2013's "Timber," and sure enough, it's wrought with emotion. If you find the song slightly familiar upon first listen, that's because it actually is: In 2015, Zedd released a version of "True Colors" on his album of the same name. But, this particular collaboration with Kesha carries a whole new weight. It's the first song Kesha has put out since a New York judge ruled in February 2016 that she could not break her contract with Dr. Luke, the man whom she accused in an October 2014 lawsuit of sexually assaulting and emotionally abusing her for a period of 10 years beginning when she was 18 — and with lyrics like "I'll show you my, my true colors/ No, no, no, no, I won't apologize for the fire in my eyes," what a telling one it will remain. (Dr. Luke, for his part, denied the allegations against him: In October 2014, he quickly filed a countersuit against Kesha for defamation, and he spoke out on Twitter in February 2016, saying, "I didn’t rape Kesha and I have never had sex with her. Kesha and I were friends for many years and she was like my little sister.")

On top of that, the lyrical changes from the original "True Colors" add significance. "It aint no rainbow" changes to "It ain't your rainbow," and there are also minor adjustments to the last stanza. The usage of "we" in Zedd's 2015 version become "I." As a result, Kesha and Zedd's "True Colors" is — as she explained on her Facebook page on April 28 — "more than a song." "It’s a declaration of" her "truth." This time, it's incredibly personal.

Notice the lyrical changes in "True Colors" below. From Zedd's 2015 version:

Something tells me, I know nothing at allWe've escaped our captureYet we have our mastersAnd somehow it's like I've waited

Then, from Kesha's version:

Something tells me, I know nothing at allI've escaped my captureAnd I have no masterAnd somehow it's like I've waited

The change from "We've escape our capture/ Yet we have our masters," to "I've escaped my capture/ And I have no master" is a subtle one, but given Kesha's heavily publicized and ongoing legal battle with Dr. Luke, it's also deeply powerful. That small change transforms the song from a standard pop song to a personal ballad about overcoming struggle and coming out on top. Kesha is back, and she wants the world to know it. That's a power move if I've ever seen one.

Sony, though unable to break Kesha's contract with Dr. Luke, has released a comment stating they're dedicated to supporting her career. As an attorney for Sony speaking to the New York Times said in February:

In October 2014, Kesha's lawyer released a statement to Billboard upon filing her lawsuit:

More like this
Adele’s All-Female Lineup Includes Kacey Musgraves, Mahalia, & Self Esteem
By Shahed Ezaydi
Travis Alabanza On Not Fitting In
By Sam Ramsden
Rylan Clark Is Ready To Party
By Sam Ramsden
Yinka Bokinni Recalls Terrifying Truth At Heart Of 'How To Hire A Hitman'
By Frances Stewart
Get Even More From Bustle — Sign Up For The Newsletter