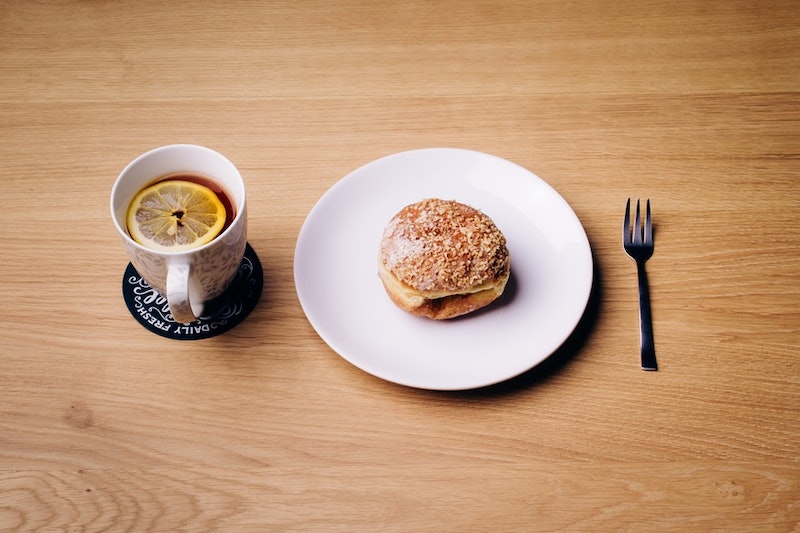 If your culinary skills consist of pouring bowls of cereal, heating up pizza, and occasionally frying an egg, then it may be time to finally learn how to cook. Not only is it way better for your health, but cooking at home is an entirely impressive and oh-so-very adult skill that makes life way easier.

You may think that sounds too good to be true, especially since cereal and pizza are pretty much the definition of "easy." But I promise, learning to cook real food has a multitude of benefits that far outweigh the arduous initial effort. In fact, according to food writer Julie R. Thomson on HuffingtonPost.com, there are at least a dozen really good reasons, including eating healthier, knowing exactly what's in your food, and saving money.

That last one is the best reason, in my opinion. As a notorious takeout diner, pretty much all my money goes to food. So I can say that, while it may seem so fun (and delicious) in the moment, giving into the ease of restaurant food is totally not worth it in the end.

Feeling convinced enough to give cooking a try? Then, here are some easy ways to quickly improve your skills, so you'll be whipping up delicious meals of your own in no time.

1. Cook All The Time

The number one thing you can do to sharpen your skills is to start cooking all the time. As food blogger Adam Roberts said on HuffingtonPost.com, "The best chefs are the best chefs because they spend most of their time cooking ... So if you say 'I’m a bad cook,' chances are it’s because you don’t cook often enough. Make yourself cook at least three times a week and watch your skills improve immeasurably."

Don't be like me and start off by cooking something notoriously difficult, like Pad Thai. I ended up with an inedible mess of noodles, and a total lack of desire to ever step in the kitchen again. I have since gotten over it, but it took a while.

You can trick yourself into cooking more often by only making foods that are extra delicious. Think along the lines of homemade pizza or cheesy lasagna. As Roberts said, "When you make food that pleases you, chances are it will please others and the ensuing praise will make you want to cook again." It's a nice sort of mind trick.

4. Don't Be Afraid To Experiment

The next time you go grocery shopping, don't be afraid to pick up new ingredients. Get interesting oils, exotic veggies, some spices — you know, foods that don't come pre-made. Then go home and experiment. You'll eventually be one of those impressive cooks who can whip something up, no recipe needed.

5. Cook Your Way Through A Cookbook

If the previous tip scares the hell out of you (as it sort of does for me), then stick to a cook book for now. Choose one you love, and make it a point to prepare as many recipes from it as possible. Once you get to the end of the book, your skills will be markedly better.

You wouldn't try to assemble Ikea furniture without reading the directions first, would you? Ok, maybe you would — but food is way different. It can burn, bubble over, and it requires things to happen in a timely fashion. That's why you should give recipes a once over before getting started. According to the editors at EatingWell.com, this will allow you to see what's supposed to happen, and lessen the chance of something going wrong.

7. Lay Out All Your Ingredients

Before you even turn on the stove, start by organizing all the ingredients. You should even go one step further by chopping everything ahead of time. That way you won't be struggling to cut an onion while your skillet sizzles away, noted EatingWell.com.

Don't try to cook using that one one spatula you bought in college. Go out and invest in some real, bonafide kitchen implements, which should undoubtedly include a very sharp knife. As Roberts said, once you experience a properly sharpened knife, you’ll understand, on a deeper level, how important it is to use the correct tool for all your kitchen tasks.

Learning to cook does involve a pretty steep initial investment, mostly because you're going to have to buy spices and oils (on top of the aforementioned tools). But these are all totally necessary to your cooking adventures, and it will end up saving you money in the long run. As David Spinks said on Greastist.com, "Invest the time and money to load up on essential cooking ingredients, such as spices, flour, sugar, and so on. That way, grocery shopping is less of an ordeal, because weekly trips to the market can involve nothing more than picking up fresh perishables." See? It's going to get so much easier.

The number one thing to remember while cooking is to stay relaxed. After all, a composed cook is an efficient cook, according to EatingWell.com, as well as one who doesn't panic when things start bubbling and sizzling. So pour yourself a glass of wine, and enjoy the learning process.

Once you know how to cook, you'll be throwing together meals like it's no big deal, and impressing everyone (and yourself) along the way.