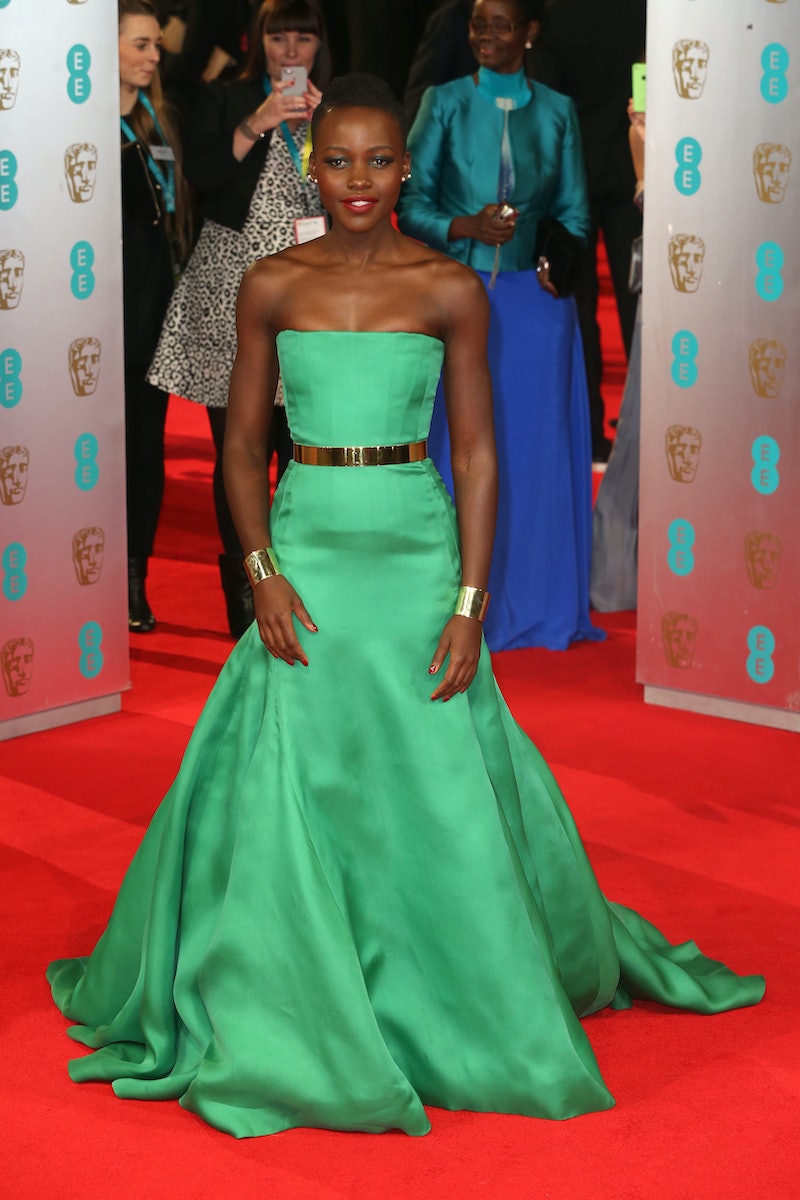 In the race for the Oscars, the Best Supporting Actress category has been particularly contentious, likely because it's been framed a rivalry between last year's winner — America's most awkward sweetheart, American Hustle's Jennifer Lawrence — and enormously talented newcomer Lupita Nyong'o for her performance in 12 Years a Slave. As Bustle's Alanna Bennett noted after this year's BAFTA Awards, during which Lawrence picked up the award for Best Supporting Actress over Nyong'o, a narrative has been constructed in which one of these women's gains will ultimately be a crushing loss for the other. Though it is unproductive to "pit" these two women against each other — each is talented in her own right and the cases for their Oscar wins could be defended at length — they are fundamentally different in their personality of celebrity.

With the way Lawrence burst onto the scene and won over the hearts of America with her awkward, new girl next door personality and heroine status, it almost seems malicious to wish for her not to win the Oscar. But let's not forget that the Oscars is (rather: should be) an awards show based on talent, and objectively, I believe Lupita Nyong'o's performance as Patsey in 12 Years a Slave was more raw and more culturally important than the others performances' in her category. Her willingness to take on such a difficult piece of history is laudable and she did it beautifully.

But if this is going to be a conversation about Jennifer Lawrence vs. Lupita Nyong'o, we must note the differences in their celebrity: J. Law has become the unattainable every woman, the goofball on the red carpet, graceful in her projected gracelessness. Nyong'o, on the other hand, who is older than Lawrence, is practically a living statue: She's almost painfully beautiful, reserved, and poised. The daughter of a Kenyan rebel against autocracy, Nyong'o is hesitant to let the public know her closely and personally. And though she is certainly humble (she told New York Magazine this month, “I’ve been in a bubble. I haven’t been out much. I haven’t gotten used to being recognized"), it seems she has realized she deserves an Oscar win, and has been campaigning for herself in a different way: through her presence on social media and in her role as fashion's newest It Girl.

She's graced the cover of New York Magazine, she's the newest face of Miu Miu, she's been best dressed in the front rows at New York Fashion Week, and this awards season has consistently put everyone else on the red carpet to shame in her outstanding selection of bright gowns that she seem to be made for only her to wear. Her Twitter, though only a little over a month old, has almost 50 thousand followers. Her Instagram feed is full of beautiful photos of herself in the exquisite fashion she loves. Nyong'o may be humble, but she knows when something is deserved, and her confidence and grace are admirable.

It seems that she does want that Oscar, after all, and that's not arrogance — a newcomer, she gave a riveting, difficult and historical performance, and as a woman of color in Hollywood, it's commendable that she recognizes the merit of her work. For that, she deserves the golden statue. And we cannot WAIT to see what she wears on March 2.

More like this
5 Wild Theories About Miley Cyrus’ “Flowers” Music Video
By Jake Viswanath
2023 Oscar Nominations List: 'Everything Everywhere All At Once' Leads With 11 Nods
By Jake Viswanath
Twitter Is Identifying With Sally Field & Jane Fonda’s Friendship In New Viral Video
By Jake Viswanath
Twitter Is Overjoyed By Angela Bassett’s Record-Making Oscar Nomination
By Maxine Harrison
Get Even More From Bustle — Sign Up For The Newsletter
From hair trends to relationship advice, our daily newsletter has everything you need to sound like a person who’s on TikTok, even if you aren’t.