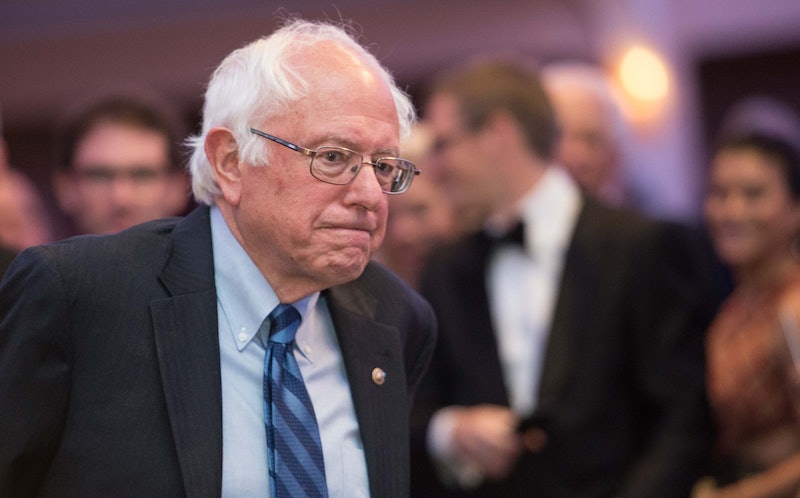 It's no surprise that many of the jokes at this year's White House Correspondents' Dinner focused on the ongoing presidential election. After all, with wild campaigns like that of Donald Trump and much-anticipated candidates like Hillary Clinton, there seems to have been more than a fair share of attention paid to the election so far, and the annual event is a roast of current events and politics at its finest. As the one candidate actually in the room, Vermont Sen. Bernie Sanders was joked about tirelessly at WHCD by President Obama and host Larry Wilmore.

The jokes about Sanders started to roll in before the main event even started, when Sanders showed up in a suit, rather than a tux. Also, many people took to Twitter to point out the irony in Sanders' attendance. His platform focuses primarily on opposing bureaucratic and establishment politics, as well as the close relationship between the rich and the government — yet the WHCD brings together political leaders, the media, and Hollywood's biggest stars in an event that costs $300 per ticket to attend. That irony was not lost on social media.

Still, shouldn't Sanders get points for being the only candidate in the audience? If he did, those points probably didn't come from Obama or Wilmore.

Although Sanders' rival Clinton was previously secretary of state under Obama, the president hasn't publicly endorsed either Democratic candidate in the current election. On Saturday, he hit both Sanders and Clinton with jokes — although he did hint that his successor would be a woman. To Sanders, Obama joked about his campaign's finances and his socialist ideas. For instance, Obama complimented Sanders by saying he looked like "a million bucks," but then he put it in terms that Sanders would be able to relate better to:

As a self-proclaimed Democratic socialist, Sanders has a more liberal economic platform than perhaps any other mainstream candidate in recent history. As such, his ideas have sometimes been compared to communism (even though such a comparison is mostly inaccurate). At the WHCD, Obama played on that comparison, calling Sanders his "comrade," a term often associated with the communist Soviet Union.

Wilmore, host of Comedy Central's The Nightly Show, also had a lot to say about Sanders. Wilmore poked fun at Sanders' age, saying that the candidate usually attends the "early bird" WHCD, as well as his policies.

The jokes weren't all bad news for fans of the Bern. For one thing, Sanders' experience was probably a cakewalk compared to that of the Republican Party, which was verbally torn apart by Obama and Wilmore. For another, Obama called Sanders a "bright new face" in the Democratic Party.

Comments like that made it hard to tell which side the president is really on with respect to the Democratic nomination process. It seems hard to imagine that Obama wouldn't side with Clinton, but then again, Clinton didn't show up for Obama's last WHCD as a president, the WHCD where he went out with a hard-earned mic drop. Either way, Sanders got plenty of free publicity on Saturday night, although his $300 ticket must have cost somebody more than 11 donations of $27 each.