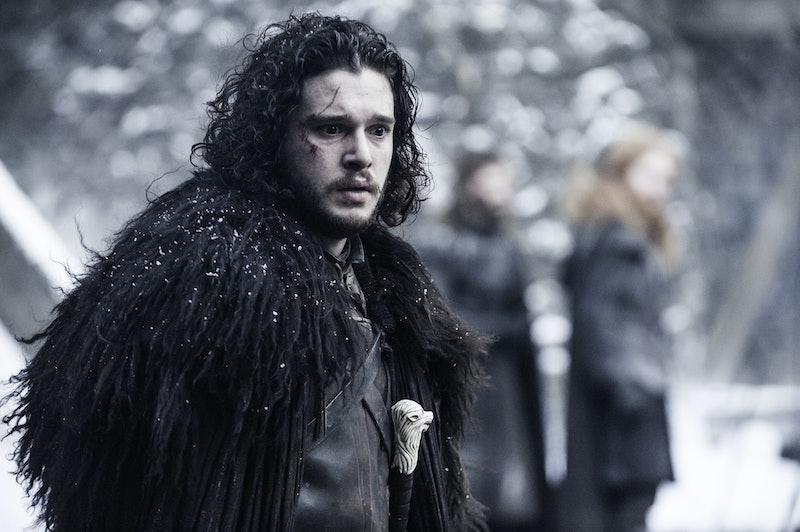 Guys, we finally got something to seriously smile about on Game Of Thrones. At the end of tonight's episode, Melisandre resurrected Jon Snow on Game of Thrones with her witchy magic and he took a great gulp of wintery air. But one thing has me thinking that it wasn't just Melisandre who was involved in Jon's resurrection. His direwolf, Ghost, who was seemingly sound asleep next to Jon's body, rose up immediately before Jon took his first breath. Did Ghost resurrect Jon Snow?

It is entirely possible that Ghost just made all of our dreams come true. If anyone was thinking that Jon may have warged into Ghost before his death, it did seem like something happened to him at exactly the moment that Jon opened his eyes in tonight's episode. The direwolf leapt out of what appeared to be a heavy sleep. It would make perfect sense for Ghost to have a hand in the betrayed Lord Commander's resurrection because their bond is simply other-worldly. Perhaps Jon's soul was in Ghost for safe keeping until Melisandre could transfer it back out. Perhaps the power of his bond with Ghost was able to drag him back down to earth. Who knows?

I suppose we will have to wait and see what exactly happened to bring us back our favorite bastard. Who knows what shape he will even be in. More questions ahead for fans, but at least one answer: Jon Snow lives, and we may have Ghost to thank for that.

More like this
Emilia Clarke Shares More Details About The New 'Game Of Thrones' Series
By Maxine Harrison
At 14, Jenny Han Wrote Rom-Coms About Her Friends & Fan Mail To Leo DiCaprio
By Alyssa Lapid
What Song Does Eddie Play in 'Stranger Things'? Metallica’s “Master Of Puppets” Ignites The Season 4 Finale
By Alyssa Lapid
Florence Pugh & Zoe Kazan Have Teamed Up For A Major New Netflix Series
By Rachel Mantock
Get Even More From Bustle — Sign Up For The Newsletter