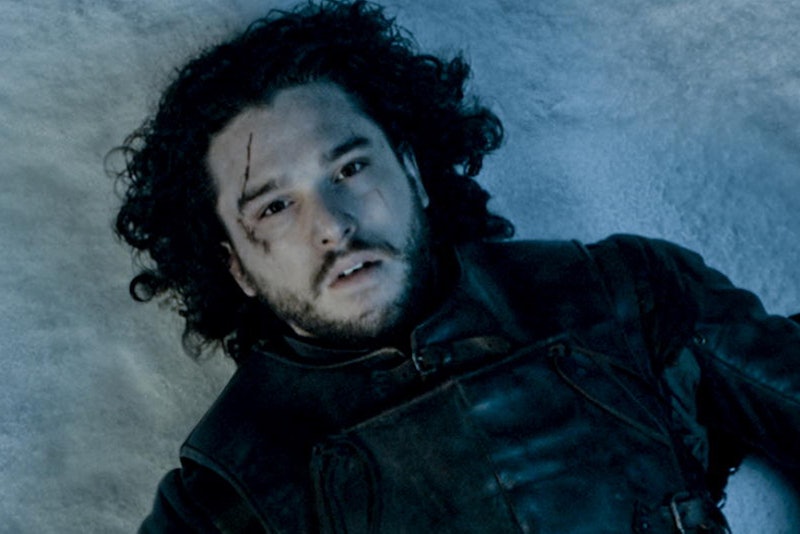 After months of debating, it finally happened: Jon Snow is alive on Game of Thrones thanks to a little help from Melisandre. But, after literally being brought back from the dead, is Jon Snow still the same, normal Jon Snow in the traditional sense? So far, I think the answer is a tentative yes. I mean, we haven't seen him in action yet, but he doesn't look zombie-fied or anything. Sure, he has some stab wounds, and maybe those will heal and maybe not, but at least the traitors left his face alone. Once he puts all his furs back on, he'll look pretty normal. But, will he act normally?

It's hard to say at this point. We only just saw him open his eyes and take a breath, so we don't know if he'll be the same á la the mindless monster that is the resurrected Mountain, or if he'll be more like Lady Stoneheart, aka very different than the character we once knew. In the books, according to the ASOIAF wiki, Catelyn's zombified version is "less gracious and forgiving than in life and is consumed with a desire for vengeance on anyone she thinks betrayed her and her son, Robb." She also looks dead, with wounds that never heal.

I guess we'll have to keep an eye on those stab wounds of Jon's to see if they heal and prove he's still our favorite bastard. And, as Bustle's Kelly Schremph points out, he could also now be Azor Ahai, the "fabled Westeros hero who is supposedly destined to be reborn and rescue the Seven Kingdoms from their days of darkness." In that case, Schremph says, "he's technically no longer Jon Snow at all."

I would love to say he'll go right back to being normal, but this is Game of Thrones, and I have a feeling the showrunners might make fans suffer for a while. I think eventually Jon will return to his normal self. But, I think having died and come back to life is gonna take a toll on him first.

More like this
'Bridgerton' Star Nicola Coughlan Confirms Season 3 Will Focus On Colin & Penelope
By Grace Wehniainen and Alyssa Lapid
Fans Of 'Anne With An E' Will Recognise 'Stranger Things’ Vickie Immediately
By Rachel Mantock
What Makes A Sally Rooney Sex Scene So Hot?
By Samantha Leach
Everything To Know About The Possibility Of 'The Essex Serpent' Season 2
By Rachel Mantock
Get Even More From Bustle — Sign Up For The Newsletter