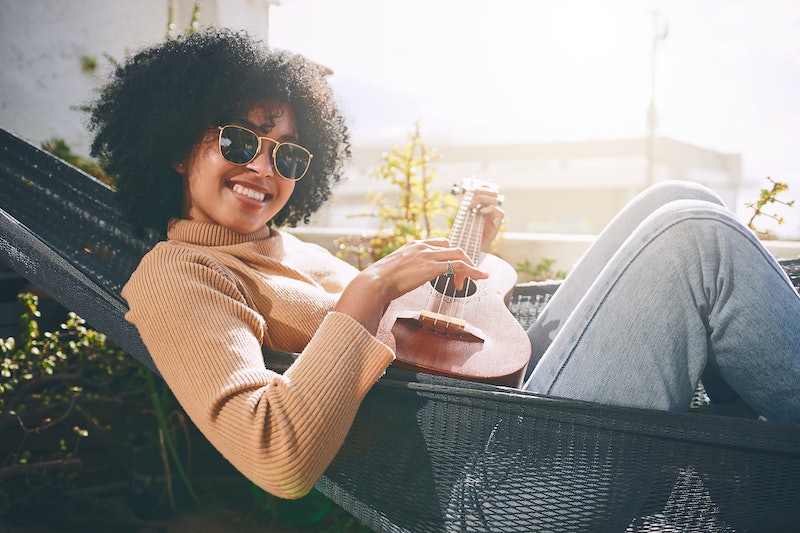 In many subtle, often barely noticeable ways, our culture teaches us that only certain people deserve respect, while others have to apologize for who they are — or even just the fact that they exist at all. Sometimes, even the strongest feminists further these ideas unintentionally. But there are many things women don't have to be to be worthy of respect, and it's time we stop implying — or outright stating — otherwise.

These standards are imposed on every group, but women in particular are often reassured that they don't possess a particular trait, like being fat, as if it would be a bad thing if they did, or reassured that they do have a certain quality, like being beautiful, as if it would be a bad thing if they didn't. And feminist women especially often feel pressure to reassure others that they're strong and independent, as if being weak or dependent would be a disservice to their gender. But women are deserving of basic respect just because they exist — just as is the case for all people. We can improve upon ourselves if we wish, but we don't need to be any of the things that advertisements or other people tell us we should be.

Here are a few qualities our culture teaches women they need to possess in order to garner respect — but also which no one should "need" to have in order to be valued and treated with compassion. If you have them, that's great; and if you don't, that's also great. Respect is something of which we are all worthy, no matter who we are.

1. We Don't Have To Possess The Body Our Culture Arbitrarily Deems "Ideal"

"You're not fat!" is a comment women often get when they describe their bodies as fat. But so what if we are? When we reassure women that they're not fat, we imply that fatness is a negative thing. The truth is that fatness is just as much a normal genetic variation as thinness, neither inherently bad nor inherently good — it just is. And it certainly does not dictate whether or not a person deserves to be treated with respect.

2. We Don't Have To Be Conventionally Attractive

Another comment women often get in the spirit of reassurance is "You're beautiful!" — as if their lives would be over if they weren't. That's because we've been taught to value women for their looks. We're taught it's OK to be fat because, as Meghan Trainor put it, "Boys like a little more booty to hold at night." We're taught it's OK not to wear makeup because many men prefer a "natural" look. Notice what these pieces of advice have in common? They hinge on the assumption that women should be attractive — which, in our heteronormative society, is conflated with attracting men. Instead of telling women they can be beautiful at any size or with any amount of makeup, let's tell them they don't have to be.

3. We Don't Have To Be Healthy

Fat-shaming is often justified as a concern for fat people's health. People like to say they don't care about anyone's appearance or anything, but they just want to make sure they're not becoming unhealthy. Why are we spending so much time worrying about the health of people we'll never even meet? We don't stigmatize diseases that we don't associate with obesity. As far as I'm concerned, if someone I don't even know would rather have a shorter, less healthy life than a longer one spent worrying about health, that's fine. It doesn't affect me. The reason we often "worry" about health concerns that don't even affect us is that we've made health into a moral issue, especially as it pertains to weight, when in reality, it's a morally neutral one.

4. We Don't Have To Be Confident

There's a popular saying that others won't love you until you love yourself. But this implies that if you don't love yourself — which is true for many women at least some of the time — others won't love you at all. A truly caring friend, partner, or family member, however, will love you even when you're at your lowest and most insecure. Yes, women deserve to be as confident as men, but that doesn't mean there's something wrong with us if we're not. Confidence is something many of us would like to work on for our own sake, but we shouldn't need to in order to gain anyone else's sympathy or approval.

5. We Don't Have To Be Indifferent To Others' Opinions

When women defend decisions that are supposedly unfeminist, we often feel pressure to say we're just doing it for ourselves: "I just shave my legs because I like the feeling." "I wear makeup for myself." But would it really be so bad if we were doing these things for other people? Given that other people's decisions dictate a large portion of our lives, isn't it understandable if we want to please others? If women do things to conform to what society expects of them, we should be blaming society for making them feel like they have to, not blaming women for responding to these very real pressures.

More like this
What’s The Kibbe Body Type Test That’s All Over TikTok?
By Marilyn La Jeunesse
Experts Say These 23 Things Won't Happen In A Strong Relationship
By Carolyn Steber
Bustle Newsletter: May 6, 2022
By Stephanie Talmadge
17 Genius Things You Can Do With Old Clothes That You Can't Donate
By Brittany Bennett and Dominique Norman
Get Even More From Bustle — Sign Up For The Newsletter