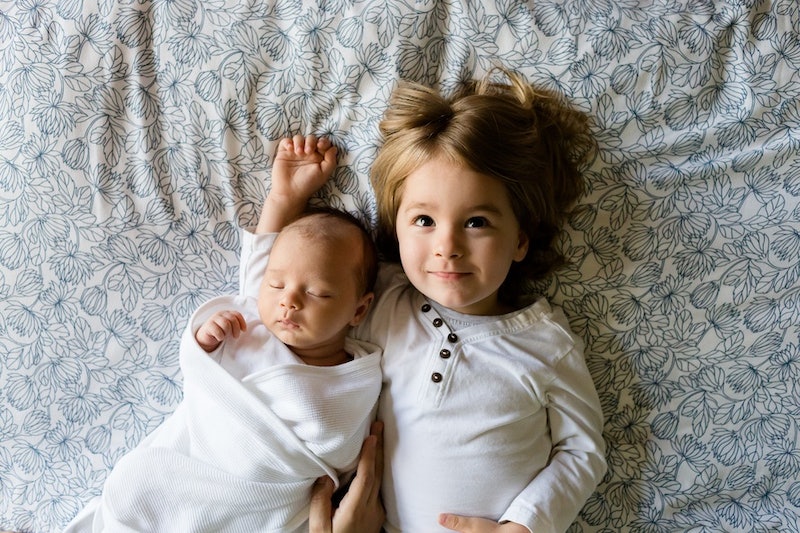 There's something special to be said about younger siblings — and believe me, I'm not just saying that since I myself fall into this category. Just as there are stereotypes about the middle child having "middle child syndrome," and first-borns feeling massive pressure over their every move, there is definitely something to be said regarding the luxuries of being the youngest sibling in the household. Obviously people's situations all depend on a variety of factors, but birth order often plays a huge part in how we're raised, and how our individual strengths and weaknesses are formed.

As the youngest, we're the Louise Belchers of the world — the ones who know their limits, but still aren't afraid to push them. We're allowed slightly more liberties, since while our parents still love us just the same, they've done this parenting thing before, and realize that breaking the limitations that our older siblings had to abide by won't lead to the end of the world. They're not as afraid of teaching us to drive, since they already have a kid with a license, and have realized it's just a necessary step that they've already conquered once.

As we grow, parents grow as well. While we're technically parented the same way as our siblings, our parents have become pros by the time we come of age. And sure, while our older siblings definitely have advantages that we don't, we definitely have a fair amount of opportunities that helped us define our personalities a bit.

1. You got away with more

When your older sibling got detention, it was likely the end of the world. How dare they disobey authority — they'll never get into Harvard with that kind of record. But when we got into trouble, our parents realized at that point that sometimes kids screw up. It's all part of childhood. No child is perfect, and detention isn't really a huge deal. It's pretty much a chance to silently do your homework at school for an hour, instead of doing it at home — it's not like it's the start of a future criminal record.

We also had a chance to experience more at a younger age. For example, maybe your parents feared infected ears when your sister got her ears pierced at the mall kiosk at the age of 12. But since no lobes fell off, they had no problem letting you get yours pierced at 10. It just stopped being the big deal it once was.

Honestly, this kind of freedom continues well into your 20s and 30s as well. Your parents just have faith in the fact that you know what you're doing, and trust that you're already aware of any possible consequences.

2. You became the queen of hand-me-downs

Yes, your sibling got fresh new clothes, but your clothes were cool because your sibling wore them beforehand. And you idolized your sibling. You thought they looked so cool wearing those cargo jeans and plaid skirts, that you didn't even care that they were technically "out of style" by the time you got your paws on them.

Plus, since your personal clothing budget was typically zero, your parents likely didn't mind the brief moments when you did want to add a new piece to your wardrobe. They handed you that crisp $20 bill, dropped you off at the mall, and trusted that you'd find something you'd like.

3. You've educated yourself from example

They often refer to the first-born as the "guinea pig" of the family, meaning that your parents saw them as being the "practice run." And if there were a few years between the guinea pig and you, you likely witnessed a lot of the first-time parenting decisions they made.

If you were the scheming type, you figured out creative ways to get what you wanted by learning from history and refusing to repeat it. So, Mom and Dad didn't respond to the pro and con list you came up with? They were totally impressed by the Powerpoint you put together, detailing why you're responsible enough for a puppy.

4. You're fine with not being the center of attention

When you were born, there were already other kids in the mix. You understood the attention split, and knew that while your ultimate successes should get a proper amount of celebration, everything you do won't really win you an award. This typically helps you out a bit socially, as well. You didn't need to win the lead of the school play, you'd be fine helping out with props and scenery. You didn't flip out over getting a "B" on a report rather than an "A" — you knew that as long as you did your best, everything would end up OK.

That said, when you did get a chance to shine, you didn't waste it. You knew your own strengths and weaknesses, and knew that you didn't need to be an all-star with absolutely everything. And there's a good chance that you were involved in activities that your older sibling never dreamed of participating in as a way to set yourself apart, and lessen any chance of unnecessary competition.

5. You developed an amazing sense of humor

This one was scientifically proven. YouGov, a British marketing research company, found out that younger siblings are usually a bit more carefree, less focused on responsibilities, and have a greater wit about them. It makes sense, in a way — without the need to "set an example" for other kids, it's likely for the youngest to be a little less serious.

6. You work well with a group

To this day, you don't totally hate group projects, since you know how to navigate them — in fact, since you were born into a "group" already, your ability to handle the pressure is pretty much second nature. The leadership role is one that's a bit challenging for you (since you never really had to make a lot of decisions growing up), but you have no problem communicating with others, while trying to get ideas together.

7. You know how to handle an older crowd

As the youngest, most extended family gatherings included not only adults, but cousins who likely had a few years on you as well. As mentioned before, your title of "the baby" helped you learn how to adapt and figure out what kind of topics the big kids talked about. This probably gave you an advantage in the arts, as well. If your older cousins recommended a band, you were likely to give them a listen, maturing your tastes at a faster rate. While the younger child may be a few years behind, they often strive to prove that they're just as mature as anyone else.

More like this
15 Ways To Tell Someone Was Just Talking Behind Your Back
By Carolyn Steber
Are Gemini & Scorpio Compatible In A Relationship?
By Kristine Fellizar
The Most Compatible Life Path Numbers, According To Numerologists
By Kristine Fellizar
The Rarest Baby Names In The U.S., According To The Most Recent Data
By Mia Mercado and Emma Carey
Get Even More From Bustle — Sign Up For The Newsletter