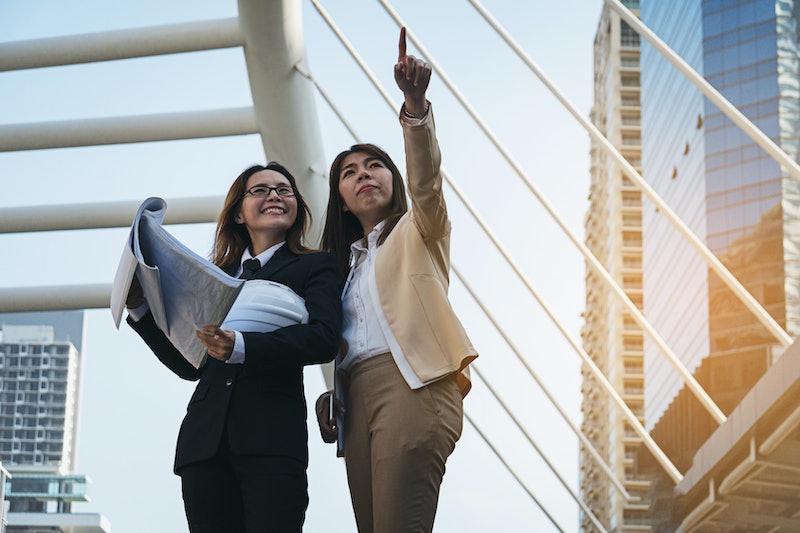 For as long as I can recall, I've been espousing the virtues of feminism. For me, being a feminist is simply a natural extension of being — it's something that seems wholly organic and right. So it's no surprise that, when it comes to my career, I feel there are little ways feminism makes me a better boss. I believe there is something inherently powerful about a feminist in the work force, and that all those "little" ways ultimately amount to a lot of strength as a leader.

Prior to branching out on my own, I spent nearly six years as the editor-in-chief of a shelter publication. And while scouting out stunning coastal homes for potential covers naturally brought my HGTV-lovin' heart great joy, the part of the job I probably enjoyed most was the people I worked with. So often, the conversation surrounding feminism covers the great, sweeping topics at hand, and feminism in the work place is no exception. But the many micro-empowering ways a feminist leader can foster a sense of equality and respect in the office are also an impactful part of progress.

Of course, there are many difference perceptions of feminism and just as many varying definitions of what equates a good boss. Here are some of the little ways I personally find feminism improves my leadership skills and makes me a badass boss:

I remember the first time I learned I would be paying $400 more than my male co-workers in health insurance premiums simply because I was in the "child-bearing range," and it made me realize just how much women in the workplace are affected by their anatomy in ways men are not. I experienced a similar epiphany after having my first daughter and had trouble finding the time or privacy to put my breastpump to work. So as a manager, I've always been very mindful of making sure the needs of my employees' are met in regards to health. This includes everything from championing for paid maternity (and paternity) leave to keeping a steady stock of Ibuprofin and tampons under the sink.

2. And I Support Their Career Choices

I had a boss once who loved to pit me against the company's other top female executive. Was it intentional? I can't be sure, but it felt like he was trying to push us into some self-perpetuating stereotype of female leaders as "catty" and "emotional." I chose not to play the game, and instead spent my energy trying to build my female employees and other female managers up as opposed to tearing them down — even when I didn't agree with their choices. When I lost one of my best employees to a rival publication, I applauded her success. When one of my top talents chose to leave the workforce for life as a stay-at-home mom, I respected her decision and supported her transition. Other people judge women's choices enough; we don't need it from each other.

3. I Don't Police What People Wear

In full disclosure, I do believe there is a time and a place for casual work wear vs. more traditional business attire. I distinctly remember loaning my cardigan to an intern who showed up for a photo shoot at a $23.4 million home wearing a white tank top over a hot pink bra and leggings. To be fair, she looked hella cute — but we were in an environment that necessitated a certain decorum. However, I am never one to judge an employee by their personal style and am generally pretty chill when it comes to work wardrobes. Why? Because hair, makeup, and clothing are frequently used as vehicles for gender stereotyping and slut shaming. As long as employees are doing their job well, I love to see people express their individuality in the office.

I never wanted to be that boss — the one everyone says loves to hear themselves talk. After sitting through countless pointless meetings that made me think that very thought, I vowed I would be a much more deliberate listener. Which, in truth, is a huge part of being a feminist in general. As a white, cisgender woman, I often have to remind myself that the intersectionality of feminism requires me to open my ears to other perspectives and step back so others can speak. As a boss, my door is always open. I encourage open discussion and feel there's great value in feedback from the people who work so hard for me.

5. Chores Are Not Gender-Based

When the sink in the company kitchen gets full in between visits from the outside cleaning company, everyone is responsible for washing their own. There's no Mama Hen tasked with swooping in and bearing the sudsy brunt. Similarly, when the seal around the company fridge broke a few years back, I didn't call one of the men in the office to come fix it. Rather, I had one of them call the repair company and, in the interim, enlisting the help of a fellow female to patch the seal back together (thereby preserving the fridge's contents) until the pros arrived. Chores at work, like chores at home, shouldn't be gendered.

6. I Advocate For My Team

OK, so IMHO, this is more of a big way feminism makes me a better boss than a little one. Unfortunately, advocating for one's team isn't a foregone conclusion for all bosses, so here we are. As a feminist, I firmly believe in equality for all people — and that most certainly includes pay equality. Female bosses, in my experience, fight harder and speak up louder to ensure their employees get the raises they deserve, regardless of said subordinates' sexes. With women on average making so much less than their male peers, it is imperative to me that pay is commensurate with performance and not gender.

More like this
5 Crystals To Manifest More Money
By Megan McCarty
Sandra Bullock, Girlboss Extraordinaire
By Matt Harkins & Viviana Olen
What Is Barack Obama’s Net Worth? He Makes *Way* More Now As An Ex-President
By Hugh McIntyre
Your Home Could Seem So Much More Expensive If You Tried Any Of These Cheap Tricks
By Dena Ogden and Sara Brown-Rigoli
Get Even More From Bustle — Sign Up For The Newsletter