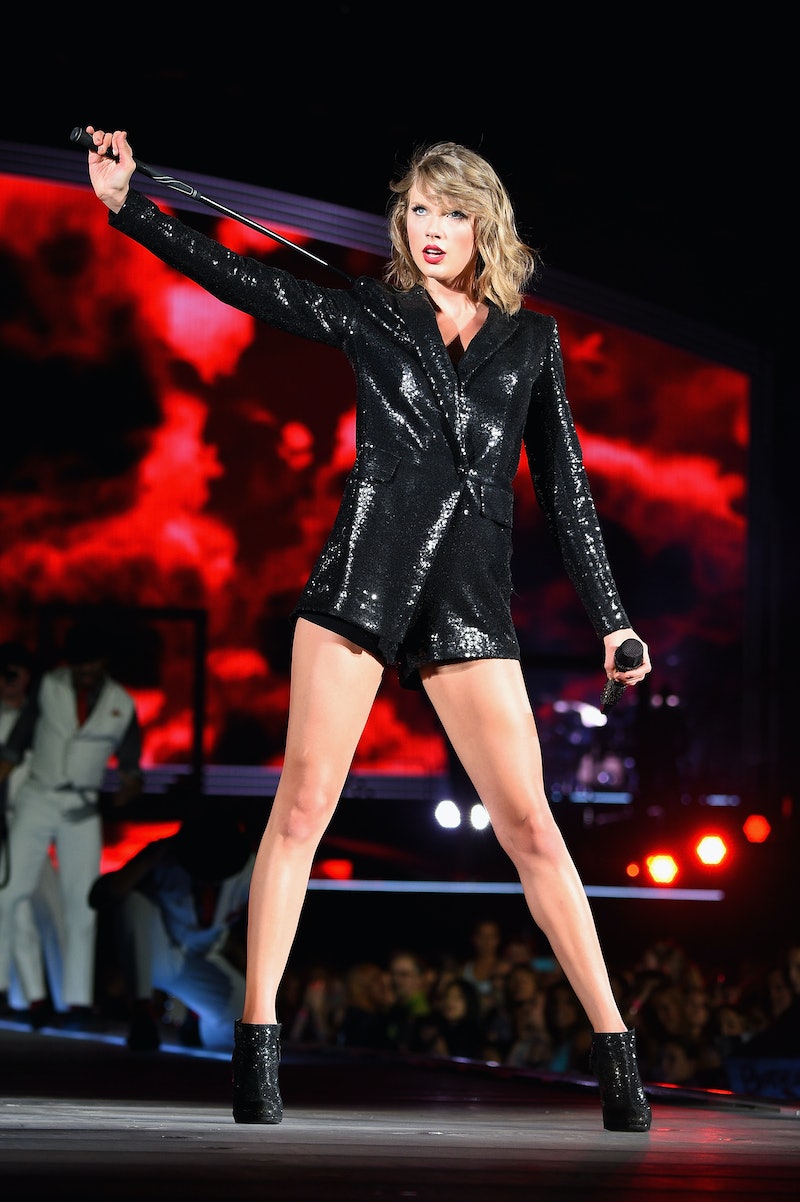 When, during a recent New Jersey concert, Taylor Swift invited the World Cup-winning U.S. Women's Soccer team on stage with her, the phrase "girl squad" officially made it into the lexicons of every teen, adult, and senior citizen in the country, whether they're grateful for that or not. Most women who are familiar with the 25-year-old have long thought of her as a fantastic role model because she is an example of a powerful female who does everything in her power to celebrate the achievements and successes of other women, rather than bringing them down in order to feel better about herself.

Swift's "girl squad," which is made up of singers, actresses, supermodels, athletes, and even fans, may be intimidating to some because it, naturally, consists of women who are self-assured and confident enough to know they can hang with a superstar and still offer the world their own amazing gifts. All of that power in one room? Scary for some, but inspirational for those who want to tap into their own power and the power of other women.

Swift doesn't surround herself with people who just want to hang around with Taylor Swift. She refuses to accept the old notion that women must compete with one another because there simply isn't enough good to go around. Swift, along with the six other women below defy that antiquated way of thinking and urge other women to do the same.

Swift's fanbase includes an astounding 34.7 million Instagram followers — millions of opportunities each day to express her gratitude for women who inspire her — and she doesn't waste a sliver of her power. From giving her Victoria's Secret friends shout-outs whenever possible (and, yes, that's OITNB's Uzo Aduba smack there in the middle), to crashing fan Gina Gabrielle's bridal shower and bringing her thoughtful gifts, to encouraging Selena Gomez to think more highly of herself, to making sure her backup dancers become stars in their own right, Swift doesn't view other women as competition — she thinks of them as allies and friends.

Girls' star and producer Lena Dunham comes from the school of Swift (or maybe it's the other way around or perhaps they're just in the same class). Dunham figured out early on that her ability to elevate the position of other women benefits everyone — including herself. This year, she launched A Casual Romance, a production company that will explore gender and sexuality and "push the ball forward" when it comes to these issues, according to Vanity Fair. In an interview with VF, Dunham described herself as a feminist and said, "When there's an industry devoid of women, there's a tendency for women to feel like they have to protect their spot, like there's not enough room in town for both of us. We need to break that down and support each other, because as my dad always says, 'A rising tide lifts all boats.'"

Some female celebrities feel they have to trash reality TV stars so they can make themselves seem far more serious, but Mindy Kaling admittedly loves Kim Kardashian, Claire Danes, Oprah Winfrey, and Kate Middleton — four names you might not ordinarily see pop up in the same interview. She had this nugget of wisdom to share in an interview with The Daily Beast when asked if she thinks there is a difference between female and male comedy: "Funny is funny. I think men loved Bridesmaids even though it was an almost all-female cast." She uses Twitter to spread important messages about both women and men she respects, including that time she urged women to read Angelina Jolie's New York Times op-ed about her decision to remove her ovaries as a preventative health measure.

Amy Schumer uses comedy — dark comedy, goofy comedy, whatever comedy ya got — to draw attention to the injustices she notices are happening to women. She also knows the importance of leaning on other powerful women to turn her statement into one that reaches and helps more women understand that they aren't alone in feeling like the world can be a pretty cruel, stupid place when you have a vagina. There's no better example of this than "Last Fuckable Day," a skit in which Schumer gets schooled by Tina Fey, Patricia Arquette, and Julia Louis-Dreyfus on how, somewhere between ages 35 and 45, Hollywood women go from "fuckable" to "unfuckable" overnight. Hilarious — and sad.

The American Hustle actress told Vanity Fair she has zero interest in competing with her female peers, choosing instead to root them on when they score roles: “I get excited for people when I know I should be competitive. I’d say in an audition, ‘I don’t think I’m right for this, but you know who you should get?’ I used to do that when I was an unemployed actress. Has Zooey Deschanel come in? Because she’d be fantastic... Have you met Emily Blunt? Because she is really wonderful.”

When she won her Oscar for Best Actress in a Supporting Role for Boyhood, Patricia Arquette knew she had the attention of every man and woman in the country — and her riveting speech about equal rights didn't disappoint. After thanking everyone she delivered a message that had everyone talking for weeks: "To every woman who gave birth... we have fought for everybody else'e equal rights. It's our time to have wage equality once and for all and equal rights for women in the United States of America." Meryl Streep and Jennifer Lopez promptly lost their minds — and it was a beautiful sight.

Nicki Minaj honors her 65-year-old female pastor with a photographic Instagram tribute. On their duet "Feeling Myself," she and Beyoncé plead with women to discover the pleasure of their own bodies. She posts photos of her female fans and calls them "beautiful." And though you may or may not like what Nicki Minaj has to say in her lyrics, some of which are raunchy, she'll forever defend your right as a woman to say anything — and, for that reason, she deserves a place on this list. Looking for a supportive Minaj message to motivate you? “Stop feeling like you shouldn’t speak your mind 'cause somebody’s going to call you a bitch. Speak your motherfucking mind.” The woman does not mince words.

Basically, when ever you feel down about the narrative of competition that is sometimes put out there about women in Hollywood, just look to this list. These ladies never disappoint and always bring the positivity.