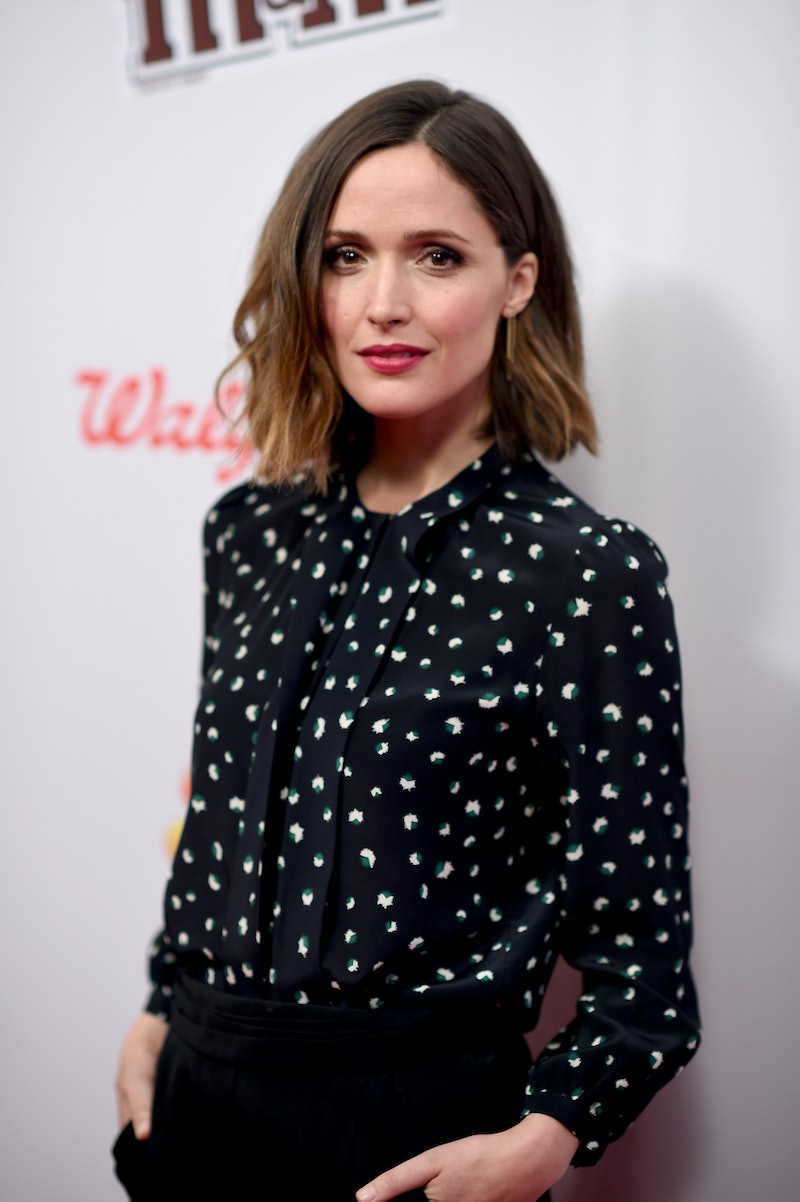 Neighbors, the 2014 comedy starring Seth Rogen and Zac Efron, followed the premise that frat boys like to party, slack off, hit on women, make a general mess of things, and outright ruin your life if you happen to live next door to them. But would those same problems arise from a sorority? That question is the plot of Neighbors 2: Sorority Rising, which reunites Rogen, Efron, and Rose Byrne, with new addition Chloë Grace Moretz playing a member of a sorority house moving in next door to Rogen and Byrne's characters. And as those two soon find out, sorority girls — at least in the movie — can be just as wild and untamed as the frat boys the duo competed with last go-around, Byrne tells Bustle.

"It is very much changing the convention that the women are all polite and well behaved and can't be just as destructive as a guys at that age," Byrne says of the movie, out May 20. "That was a big part of the joke, that we thought the fraternity was bad, when it's actually the sorority that is a lot worse!"

While young collegiate women might be expected to act politely or be soft-spoken, Neighbors 2 takes delight in tearing that image apart. When Moretz's character hits her freshman year and discovers that sororities aren't allowed to throw their own parties, she and a few friends decide to start their own version of Greek life. They move into the same house that Efron and his frat buddies used in Neighbors, and, like their male predecessors, start terrorizing the couple next door. What ensues completely rips apart the idea that young women need to fulfill certain roles, challenging the notion that their choosing to act out in the same ways in which young men do makes them "unladylike."

"The big thing is that the girls were trickier to navigate than the guys, so we had fun with it," Byrne says. The actor adds that for the movie's actors, having so many interesting roles for women in the movie had an added bonus. "In comparison it was definitely interesting," Byrne says of the on-set environment of Neighbors 2 vs. the original, adding that there was "a slightly different energy" on the new film. "I think Seth was a lot more intimidated, he was pretty scared most days!"

Yet for Byrne, the experience of having a female-led set was a great one, Says the actor, "I loved it. The girls were really fun to hang out with. We had a lot of fun on set, a lot of laughing." She also appreciated that her character, Kelly, is — like the young women in the sorority — just as flawed as her male counterparts. She's funny and charming, yes, but she's can be brash and nasty if she has to, which makes her all the more realistic.

"It mirrors the first one which, we really didn't want to adhere to that stock kind of mentality that's been problematic in comedy over the years," Byrne says. "And [director] Nick Stoller is such a great guy and a real champion of that, so I think it does make our film a little more special, funny, and also just more like-life."

In most college comedies of the new millennium — American Pie 2, Road Trip, Old School, Van Wilder, and Accepted, to name a few — it's hard to find a female lead who isn't a total stereotype or cliche (the Pitch Perfect franchise marks one of the only notable exceptions). Sorority girls, especially, tend to be confined to a certain type, that of a silly, unintelligent person who only cares about boys, booze, and material items, as seen in films like Legally Blonde and The House Bunny. Wives of bawdy men, too, are more often than not viewed as shrewish nags; just look at The Hangover or Knocked Up for proof. Yet by portraying complicated, realistic women, rather than characters who could fit into stock types, Neighbors 2 stands out from the array of comedies typically released each year.

That said, Byrne, for one, wouldn't be too thrilled if the female-led drama her character gets involved in during Neighbors 2 ever became a reality. Asked what she would do if a wild fraternity or sorority ever moved in next door to her, she admits that she would immediately leave the premises. "Oh man. I would move out," she says. "I'd do everything under the sun to just move out."

Or perhaps, like her character, she'd choose a different route: getting even, and having plenty of fun while doing it.