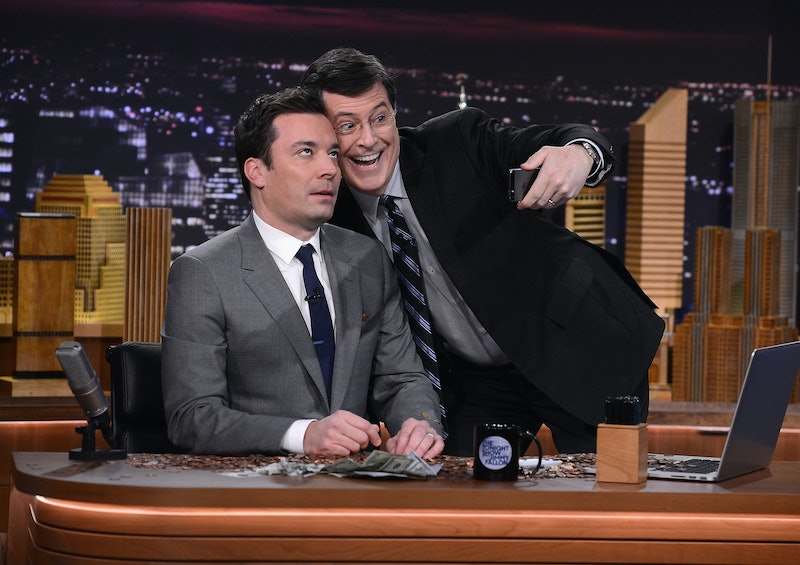 Last night Jimmy Fallon made his Tonight Show debut and set the standard pretty high for himself. He gave a sentimental monologue, U2 played on the roof of 30 Rockefeller Plaza, and he did a dance segment with Will Smith called "The Evolution of Hip-Hop Dance." But the most surprising part of the show was when Fallon announced, "To my buddy who said I’d never host The Tonight Show. You owe me $100." I thought the joke was, "Ha! As if he needs 100 bucks! He's the host of The Tonight Show!" but I was wrong because then a parade of celebrities made their way to Fallon's desk to pay him $100. The list seemed like it would never end. Robert De Niro! Lindsay Lohan! Lady Gaga! There were 14 special guests all together, so of course some of them ended up Tweeting and Instagramming about their experience. This group was really random — Mariah Carey and Joe Namath probably don't hang out on the reg — so some of the pictures snapped are pretty awesome.

Here's Kim Kardashian, Seth Rogen, and Tracy Morgan in a picture posted by Kardashian. They should definitely be BFFs from now on. Rogen and Kardashian can make the "Bound 2" face at each other!

Kardashian posted another picture (is it a surprise she was the one taking the most backstage pics?) of herself with Mike Tyson, Joan Rivers, Lindsay Lohan, Sarah Jessica Parker, Tracy Morgan, and Lady Gaga. Hopefully they all went out for a celebratory dinner at Olive Garden after this.

Lohan posted her own photo on Instagram of herself in an elevator with Robert De Niro in the background. It's the best.

And Sarah Jessica Parker re-posted Kardashian's group picture with a caption that sums up Fallon's first night perfectly. "Amazing night. @jimmyfallon received the torch with grace, humility & great humor. It was a thrill to witness & meet some of the others paying up on bet. X,sj."