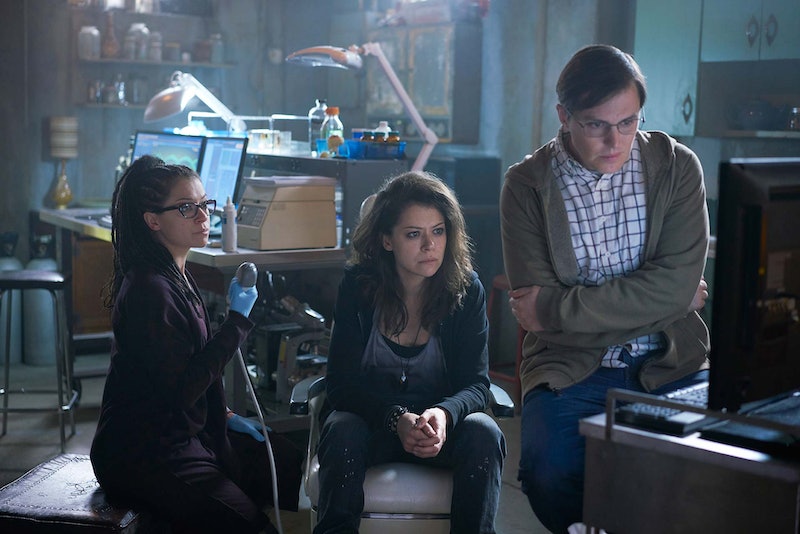 While perhaps not as iconic as Dallas' classic "Who Shot J.R.?" cliffhanger, the question of "Who Shot Delphine?" has been on the mind of every fan of BBC America's Orphan Black since the climactic events of the Season 3 finale, which saw the French scientist gunned down in a parking garage by an unknown assailant. But an even more pressing question than the identity of who shot Delphine would be: "Is Delphine dead or alive?" Well, the new trailer for Orphan Black Season 4 may have inadvertently spoiled the answer to that question — while providing plenty other tantalizing scoops for the new season, to boot.

(It goes without saying, but SPOILERS from here on out!)

The revelation comes when a series of seemingly innocuous Dyad employment records flicker across the screen about 15 seconds into the trailer. First up is Scott Smith's file, which lists the bumbling character's security level as "Entry Level — Employment Suspended." Next up is Delphine's, whose own security level is listed as simply "Employment Suspended." We then see a few other files, including Cosima's ("Employment Terminated — Special Interest") and Alan Nealon, who was killed by Delphine in the Season 3 finale ("N/A — Deceased").

If Delphine had succumbed to her gunshot wound, wouldn't she be listed as "N/A — Deceased" like Dr. Nealon? (Remember, Delphine was forced to shoot the neolutionist in self-defense after he tried to kill her with a weird tongue-worm thingy.) You could argue that perhaps these files are from a scene early in the season before Delphine's body is discovered; perhaps Dyad simply doesn't know of her death yet. But if that were the case, then why would her file say "Suspended"? Last we saw Delphine, she was very much in active employment with Dyad.

No, it seems much more likely that Delphine survives her gunshot wound and is listed as "Suspended" because she's in the hospital recovering from the attempt on her life. Furthermore, at the show's PaleyFest panel last October, Orphan Black co-creater Graeme Manson teased about Delphine's fate that, "Where’d she get hit, the liver? It looked like that’s not necessarily fatal…" We still don't know who shot her or how long into Season 4 it will take the writers to official reveal that Delphine is alive, but it certainly seems like fans of the character can breathe a sight of relief for now.

But the Delphine spoiler wasn't the only interesting tidbit in the new trailer. It also promises a healthy dose of Krystal, the new clone we met in Season 3: the ditzy stylist who was kidnapped by Dr. Nealon and posed as Rachel Duncan so he could help Rachel escape from the Dyad Institute. And it gives viewers our closest look yet at the newest clone, Season 4's mysteriously monikered M.K. We knew very little about her — other than her affinity for sheep masks — until now. The Season 4 trailer reveals that she's a hacker; we hear her telling someone over the phone, "You need to run… Right now."

Check out the trailer for yourself right here and then tune into the Orphan Black Season 4 premiere on Thursday, April 14 at 10 p.m. ET.