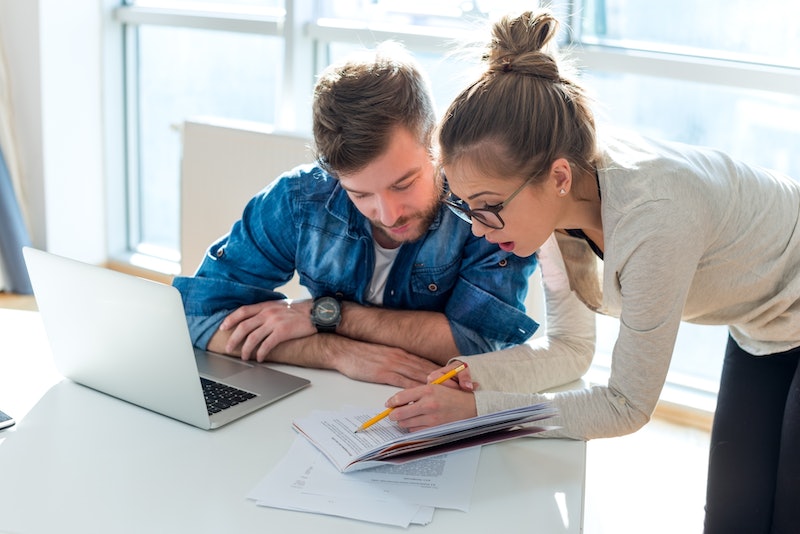 We've all had those menstrual-cramp-packed mornings when we desperately wish we could just send our boss a email that says, "Period sick day!" and they would simply respond with, "Rest up!" The world we currently live in doesn't exactly work like that, though, but it's still nice to dream (no really, I have actually had that dream).

The issue of menstrual leave has been on our minds for a little while now, especially since NPR named 2015 the Year of the Period. Many believe that, if men had periods, menstrual leave would have been a nationwide practice a long, long time ago. A company in the UK called Coexist, in which 24 out of 31 employees are women, is taking matters into their own hands. They announced in March that they were creating a "period policy" that would allow women to take off work during their period in an attempt to make everyone healthier, as well as more productive.

However, not all women think paid period leave every month is the answer. Some worry that it will actually add to period stigma, that we'll continue to be seen as weak creatures who are merely at the mercy of our monstrous hormones. Others are concerned that male bosses will be inclined to show favor towards the women who decline menstrual leave, viewing them as the admirable ones who truly take their job seriously. Around the world, we can see that implementing the idea isn't always met with success. For example, women in Japan have actually had the option to take menstrual leave for the last seven decades, yet very few opt in for it, largely due to the immense stigma around the issue.

Regardless of whether we can agree on menstrual leave becoming a thing for offices everywhere, we can certainly come together on the sheer fact that being more open our periods can be a useful way to break down the menstrual taboo. Because, as the situation in Japan illustrates, policy can only do so much if we're not changing the way we talk about periods in our everyday interactions.

Here are five reasons you should tell your work you're on your period.

1. You Probably Tell Your Boss When You're Not Feeling Well In Any Other Capacity

You can probably remember the last time you were suffering from a splitting headache and you popped into your boss's office to say, "Hey, I'm feeling under the weather, so I'm going to lay low if you need me." It doesn't necessarily mean you're leaving the office, it just means you're letting them know you're not performing at your highest. Hopefully, they ask if you're OK, tell you to reach out if you need anything, and send you on your way. (And if they don't, seriously consider changing jobs.)

Menstruating is a bodily function that can temporarily affect you, just like a headache or seasonal allergies might, yet we're much more inclined to keep it under wraps. If you start to think of your own period symptoms as a health issue, which it is, you'll eventually be able to speak about it to your boss the same way you would about any other ailment.

2. Keeping Quiet Only Adds To The Menstrual Taboo

It doesn't matter how many companies are offering their female employees menstrual leave if we don't first tackle the taboo that still surrounds a woman's period. People, particularly men, become visibly uncomfortable when we speak about this natural part of womanhood. They've grown up under the impression that periods are gross and that they're things only women need to worry about. As a result, many of them know next to nothing about the menstrual cycle, which leaves them ill-equipped to handle conversation about it.

We can slowly start to change that if we talk about our own periods more often. It can be as small as dropping a line to your boss, like, "Hey, I'm dealing with some menstrual cramps so do you mind if I take off a bit earlier today?" They might be taken aback, but the more they hear about periods in a normalized way, the more likely they'll start to understand that it's a natural bodily function.

3. They May Be Willing To Compromise With You

I think a lot of us are afraid that our office would violently chew us up and spit us out if we ever owned up to the fact that we were menstruating. But you may be surprised at what will come out of the conversation. If you've got a boss who is generally understanding of people's health around the workplace (which they absolutely should be), they may level with you when you tell them about your cramps and fatigue. Maybe you can work out a deal together, like allowing you to rest for the remainder of the day and then make up the work later on in the week. You'll never know unless you ask.

4. There Is A Tasteful Way To Do It

You don't have to storm into your supervisor's office with a flashy opening number about how your uterine wall is currently shedding. You don't have to loudly demand your boss understand each layer of your condition, either.

A good first rule to live by is to speak about it with your boss in private. Don't make it a public scene. Your coworkers don't need to know about your personal business, which includes your menstrual cycle. When you sit down to have the conversation, be sure to frame it as a health issue — because that's precisely what it is. It's not a sliver of your personal life that you're sharing out of context.

5. You Might Inspire Other Women Who Deal With Severe Periods To Speak Up

Not every woman suffers from a period so debilitating that they actually need time off each month. Painful periods are a reality for many, though, and chances are those are the very women who feel least comfortable being honest with their boss about their condition.

According to the American Academy of Family Physicians, 20 percent of menstruating women suffer from dysmenorrhea, which is period pain so severe it prevents them from completing daily tasks. Endometriosis, which affects up to 10 percent of women and hinders them from living life normally, is also way more common than bosses may realize. While some birth control methods help control the pain associated with these conditions, they don't completely erase them.

If women at your office catch wind of you being candid about your own period, they might consider doing the same, even if they've never been honest about it before. No woman should have to deal with a debilitating period in silence. Above all, be confident that your period is nothing to be ashamed of. That will be your best guide.