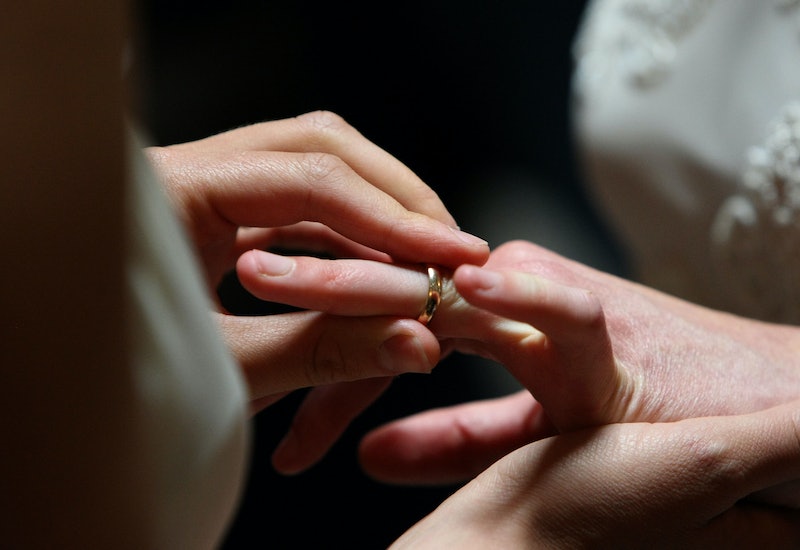 Just like Anna Paquin, who tweeted about her bisexuality and marriage for Pride Month, I am a bisexual woman, attracted to both men and women, and I am proudly married to a man who's only attracted to ladies*. So what's it like? Awesome, predominantly. Being bi and married to my dude is a wonderful and fulfilling situation, mostly because he is excellent and accepts all my parts, including the bits that like another gender. But together we have discovered that, through no conscious fault of our own, we confuse people. Frequently. Deeply. Sometimes in a way that ends with strange girls trying to break into our room at parties. (More on that later.)

Much of this confusion seems to come from two sources: preconceptions about bisexuality and how it works, and preconceptions about marriage and what it's for. When our relationship is viewed from the outside, these ideas sit atop it like an incongruous cheap baseball cap and affect how we're perceived.

Here are the four ideas about marriage and bisexuality that I regularly encounter, and why they're wrong:

We Are All About Threesomes

More than one person has assumed that bi-hetero relationships must involve threesomes, regularly. In the same way that straight relationships involve, I don't know, Chinese food, or fighting over the remote. My husband gets fist-bumped rather a lot.

Cute, right? Except that it meant that a drunk girl at a party we both attended, who'd never met me but who had heard that I was bi and therefore "must be up for it," tried to force her way into the room where we were sleeping for an unexpected menage a trois. Obviously there are many things wrong with that situation. But the underlying assumption, that threesomes are regularly on the sexual menu, isn't too uncommon. It defines "bisexual" as "can't be satisfied without both sexes at once," which is another, entirely different sexual identity.

It also overlaps with the stereotype that bi people are sexually insatiable and will seek out anything with a pulse to satisfy their raging libido. "Is it breathing? Can it consent? Sweet, it's macking time." This is... not true. I am not Lord Byron.

It's The End Of My Queerness

Committing to a lifelong heterosexual relationship when you've been a part of the queer community can cause conversations like this:

"Why didn't I get an invite to your Pride party this year?"

"We just... thought you wouldn't be interested. Now, I mean."

Yep. Bi people are in a particular bind when it comes to their dating pool: If they find a partner of the opposite sex, they run the risk of being accused of queer treason. Having a legally married dude partner means that, for some very lovely LGBT friends, I have sadly lost all my gay points, copped out, thrown in the rainbow-colored towel, and can no longer take part of Pride activities because I'm too busy being committed to male genitalia.

It's also frankly frustrating when anybody, straight or gay, assumes that I have been magically, permanently cured of my (very real) attraction to boobs by prolonged exposure to my dude's heterosexuality, like it's musky anti-LGBT radiation. Sexuality is fluid, and it can change over time, but assuming this in another person is a good way to get something thrown at your head.

And then there are the people who decide I was never actually REALLY queer at all, that I was either a L.U.G — Lesbian Until Graduation — dating women because it was fashionable and edgy or because I was just confused.

Nobody's actually congratulated my dude on "turning me" or "helping me make up my mind" — yet. But I have had a few comments about how relieved I must be that, like Jessie J's, my experimental phase is over. Nope. Nope nope nope.

People can be very uncomfortable with the concept of bisexuality as a permanent identity rather than a 'holding pattern' while you choose which gender you REALLY like. Evan Rachel Wood, who is bisexual, told a journalist for Out magazine, "People like things black and white. It's less scary. Grey areas make people uneasy." Marriage seems like a definitive choice, like you've FINALLY chosen one team over the other, which is obviously pretty uncomfortable, since I'm still firmly in that grey space.

The LGBT community and marriage have a very fraught relationship, with a legacy of "traditional" gender roles and inherent historical patriarchy to battle. Taking advantage of a right that many gay people still can't have — and aren't sure they want — can put a big wedge between yourself and your queer identity and community.

Putting on the dress and the ring and legally binding yourself to a person of the opposite sex can wreak havoc not only on your gay credentials but on your own self-perception. Is this really true to who I am? Am I turning my back on the struggle of a minority? Am I — gasp — taking the easy way out?

Quick answer: No. I'm not. Marriage is never an "easy" decision, regardless of sexuality, and if I'd fallen in love with a lady, I would have married a lady. If anything, the ease with which I could get hitched to a dude, and the sheer happiness that accompanied that act, makes me even more conscious of what it means to deprive other queer people of that right.

And then there's the concept that a lifetime with only one set of genitals for company is inconceivable for bisexual people. INCONCEIVABLE.

I've had some very concerned dialogues go something like this:

"But how can you be happy with just one gender? Forever? Won't you always be thinking about the other one? Aren't you unfulfilled? Won't your partner think there's a little bit of you he can't satisfy? IS YOUR MARRIAGE DOOMED?"

Welcome to a contradiction of bi-and-married existence. Critics treat you as if you have taken one of two paths: either you've relinquished your bisexual identity, and so seem to have abandoned queer struggle to take refuge in the safe familiarity of the patriarchy, or you've kept it and are seen as incapable of dealing with the structures of state-sanctioned monogamy. Whee!

Here's the thing — monogamy doesn't mean that your genitals are programmed only to want your partner's genitals forever more. Attraction to others, regardless of orientation, doesn't cease because you put a ring on it. That's a conversation that modern society is only just learning how to have: that commitment to one person is a continued choice, and that it's OK and healthy to think other people are cute.

I don't feel any mourning for my access to breasts, any more than I mourn for my access to other dudes. They are, after all, still in the world. If I felt any urge to still be out squeezing them, I would not have walked down that aisle. Being bi and married doesn't mean perpetually thinking wistfully that the grass is greener elsewhere; it means really, really loving your patch of garden, and working on it ardently. The gardeners are a little out of the ordinary, but the flowers sure are beautiful.

*I don't refer to my dude as "straight" because he doesn't like the word. He prefers the term "heterosexual," or, if you want to be precise, a male-identifying person who is female-attracted.

More like this
Gen Z Are Twice As Likely To Identify As Queer, According To New Data
By Sam Ramsden
25 Inspiring Quotes From Black Women To Celebrate Black History Month
By Kyli Rodriguez-Cayro and JR Thorpe
The 3 Zodiac Signs Most Likely To Get Married Later In Life
By Kristine Fellizar
24 History-Making Black Women You Probably Didn't Learn About In School
By Ayana Lage and JR Thorpe
Get Even More From Bustle — Sign Up For The Newsletter
From hair trends to relationship advice, our daily newsletter has everything you need to sound like a person who’s on TikTok, even if you aren’t.