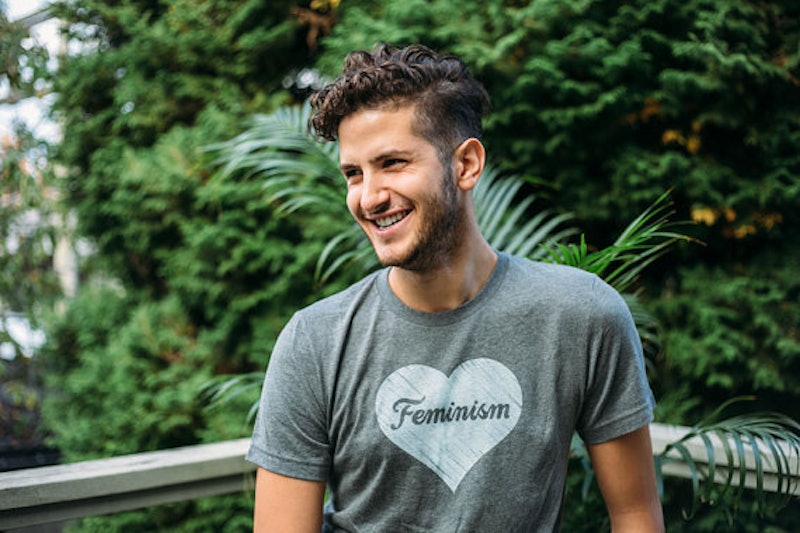 How do you know you're dealing with a feminist man? Maybe they can quote gender theory and discuss feminism until the cows come home, but the real tell about feminist belief and thought in anybody is in their behavior. There are certain actions and beliefs that anybody with genuine, considered commitment to female equality shouldn't do; whether they're unaware that the actions are incompatible, or aren't really engaging with feminism at all, isn't for me to judge. No, you shouldn't put any dude who says he's a feminist-ally through a series of weird tests; but you should watch out for signs of any of this stuff, because it means you may need to have A Conversation.

There are certain obvious ways for men to be anti-sexist. Not catcalling or calling anybody sluts is generally a good start; but the bar is higher than that. We now live in a world where no less than the (male) Canadian Prime Minister calls himself a feminist openly, and with great bemusement that anybody would be surprised (oh, Justin Trudeau, you dreamboat). A man doesn't have to go on Equal Pay Day marches or advocate for abortion rights to qualify, but he certainly has to avoid, or at least try to understand, some of the more insidious parts of inequality between the genders.

Here are seven things a true feminist man won't do, or at least really shouldn't.

1. Believe They Are Entitled To Sex Or Attention

Dudes with a knowledge of feminism and also basic social courtesy would never. The idea that sex can be "owed" is basically bonkers from beginning to end, but the nasty truth is that it largely seems to appear in men who claim sexual obligation from women in return for their money/time/general failure to be an asshat. Feminism crucially includes the notion that a female's right to her body is her own, and that she alone has control of it; a man who demands or believes he is owed sexual favors does not understand female equality.

2. Devalue Professionals Because Of Their Gender

No, you cannot be a feminist ally and still believe that Hillary Clinton would be bad at being president because she'd go mental during her period. (You can believe she'd be bad at the job for whatever other reason you like, but no, you cannot connect it to her gender. Plus, that doesn't even biologically make sense.) A feminist ally man also believes in equal pay for equal work.

3. Argue That Equality In The Media Isn't A Problem

I'm talking about the length and breadth of media, here. Feminist-ally men should find it at least troubling that the majority of films made by Hollywood star (and are directed by) men; they should also be open to arguments about structural privilege in journalism, female representation on television, why on earth so many female characters in video games are ridiculously booby, and the pay gap between film stars by gender. A feminist ally man is not going to go on a Twitter rant saying that these issues are irrelevant, and he will at least try to understand why this stuff's important, rather than wondering why it bothers women so much.

Feminist ally men will attempt to empathize with the degree to which women's bodies are controlled, policed, shamed, doubted, targeted, and dehumanized, from advertising to mass media. And they'll know that its impacts are not exactly light. Nobody's ever going to hear a dude with serious feminist leanings tell a girl she's "just taking it too seriously" and "needs to get off Instagram".

There are feminist ways to tell a woman she's beautiful when she's feeling like the whole world says she isn't; feminist men will try to navigate that. If a dude doesn't, he doesn't quite get feminism yet.

5. Insist They're "Just Being A Nice Guy"

If they do, they shouldn't. The "nice guy" tag is currently completely tainted by horrible misogynists who seem to believe their "niceness" means they deserve dates, and that the only reason they're not getting any is because women choose "bad boys" instead. The "nice guy" phenomenon (which ties in with pick-up artistry) is an insidious one, because often adherents will protest that they love women and want to protect and adore them; but fundamentally, they believe that female decisions about relationships are completely invalid and stupid, unless they somehow go in their favor. That's not respect, that's ... well, the opposite.

6. Talk Over Or Attempt To Drown Out A Woman

If a man purports to fully support feminism but keeps doing this, challenge him on it. It may be that he treats all argumentative partners like this, regardless of gender, in which case tell him to stop it, because it's disrespectful. If he happens only to do it to women, though, it's a larger problem. It may be unconscious, but it's still a signal that female voices are less significant or "quieter" to him, or he's less worried about drowning women out. It's bad practice and a properly feminist dude needs to check it.

A feminist man will understand what visibility means, why it's so crucially important to have women in positions of power, and the serious difficulty in many industries faced by women with those ambitions. If somebody gets promoted, wins a prize or is in some way placed in front of male competitors, they won't cry foul or say it was weighted to help her win, even if they mean that in a positive sense. And they also won't see reinforcing the basic iterations of equal rights — the right to health care, the ability to consent to sexual activity, the right to equal pay, the right to walk down the road without being harassed — as "special treatment".