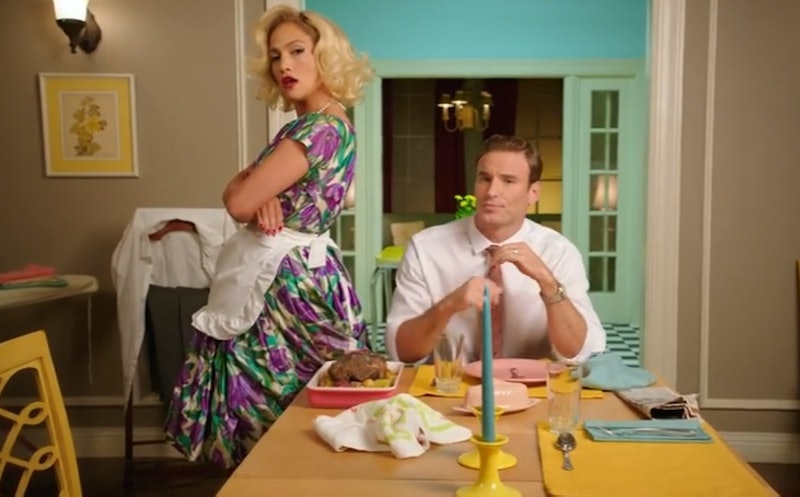 Just in time for Mother's Day, Jennifer Lopez has released "Ain't Your Mama" a Network-inspired feminist anthem for the ages. Each frame in the video is loaded with historical imagery that takes you from the beginning of the second wave feminism movement straight through to today. As an added bonus of awesome, Lopez samples Hillary Rodham Clinton's famous "human rights are women's rights" speech given in 1995 at the United Nations Fourth World Conference on Women. The historical context behind the video is beautifully rendered and full of pop culture nods to famous films, as well as the very real history of the women whose lives were changed by the impact of second wave feminism.

The lyrics for "Ain't Your Mama" focus more on equality within a romantic relationship, but the video is where Lopez and the song shine. There's a lot of strong imagery packed into five minutes, and it reads as a call to arms for women to continue to speak out because the feminist movement is far from over. By using history as a touchstone, Lopez shines a light on the continuing importance of feminism, and the need for women to refuse to be silenced in any situation.

Watch the video, and then let's breakdown the historical significance of each era Lopez highlights, so you don't miss a single impactful second.

At the start of the video, Lopez is frustrated after a long day of work and dealing with a man who seems unwilling to do anything for himself. It's then revealed she is a news anchor, and that's when she begins paraphrasing one of the greatest movie monologues of all time. The "you've got to get mad" line, and the urging people to get out of their chairs and go to their windows, is from the 1976 film Network about a disenchanted newsman. The movie is a commentary on the media which still rings true today, and which makes it the perfect scene to sample for Lopez's broadcast that reaches across time from women in the '60s to now.

After World War II, women were expected to leave their roles as workers and return to the home, and popular culture played a major part in reinforcing the idea that women should resume their role as homemakers. This was a far different era than today, where women can choose to be stay at home moms. In the '50s and '60s, it was expected, and television shows like The Donna Reed Show and Leave It Beaver made domesticity seem like the only "normal" option.

Lopez is clearly evoking scenes from the shows that were filtered into homes across America. She gives us the idea of the perfect housewife, an ideal that women of the time saw every single day. It was at this same time that feminist writers Simone de Beauvoir and Betty Friedan's works were becoming available to the women of the '60s and '70s who became part of the all-important counterculture movement.

If this scene conjures up images of Mad Men, I am pretty sure it is because it was intended to. If you've seen the plight of Peggy Olson and Joan Holloway, then you understand what it was to be a working woman in the '60s. Women were often undervalued in the workplace and objectified. As secretaries, they were the "face" of the company as Parade's article on famous secretaries points out, and a great deal of emphasis would be placed on their appearance. While the media painted working class women as an anomaly, they were a major part of the work force, who were faced with the same onset of media stereotypes as homemakers. In fact, pop culture has always delighted in pitting women in the workforce and stay-at-home mothers against each other. It's a trend that, sadly, hasn't yet dissipated.

By the 1970s, second wave feminism was in full swing, and women were joining the workforce in much larger numbers. However, they were now plagued by yet another media stereotype: can women have it all? Women were now expected to maintain the household and work all day (or night). Many women took on manual work in factories where equal pay was just a dream. While the women's liberation movement was becoming a powerful force and looking to make an Equal Rights Amendment a reality (it never became one), television and film began to show more working class women in series like The Mary Tyler Moore Show and Rhoda.

However, it's clear that it is the 1979 film Norma Rae that most inspired this section of the video. In the film, Sally Field's Norma Rae pushed for unionization to combat the horrible working conditions factory workers faced.

By the '80s, it was clear that women were not going to be pushed out of the corporate world. Watch any '80s movie about the business world, and you will see a woman wearing a power suit (see: 9 To 5, Working Girl, and Baby Boom for starters). There was another obstacle facing career women in the booming '80s, though, and that was the glass ceiling effect, which Lopez uses a glass door to illustrate. Women were far less likely than their male counterparts to get promotions, no matter how talented and capable they were (this effect is still in play for women and minorities today). An even better visualization is Lopez solving her male co-workers Rubik's Cube and tossing it back to him.

The video ends in the modern era, where discussions of feminism have never been more important. By sampling Clinton's famous 1995 speech and ending the video with a look at modern women who are still struggling to be heard and seen, she uses powerful imagery to remind everyone that feminism is still here, it is still necessary, and equality has not been achieved. More poignantly though, women are standing together on issues now possibly more than ever before, as issues like intersectionality, body positivity, and the necessity for equality have become a part of the conversation within the media and in the day to day lives of women.

Lopez did an excellent job merging pop culture, history, and feminism to create a video that speaks to both the past and present of the feminist movement with a welcome winking dash of the lingering girl power ferocity of the '90s.