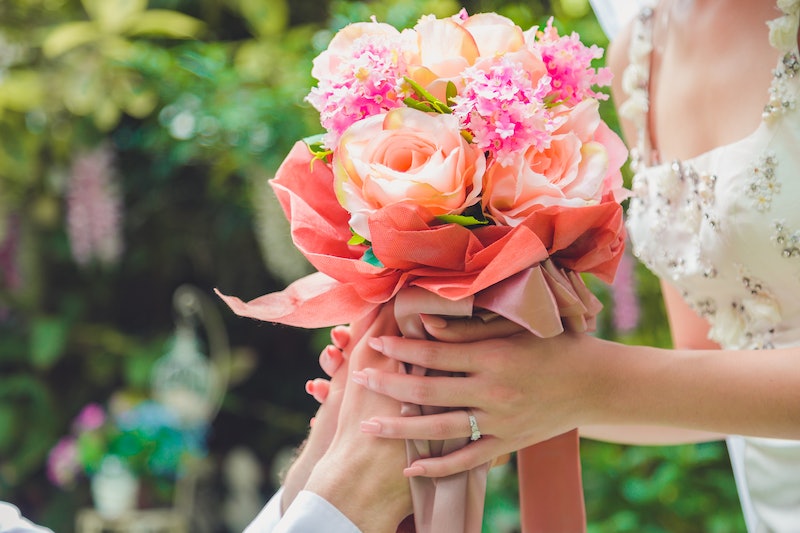 If I’m totally honest, a huge part of why the first dance has gone the way of all things is because we’re not having dancing at all. Neither one of us are dance-y people, and neither are our friends and family; as such, it just didn’t make sense to build an entire reception around a dance party no one actually wants. Additionally, not having to hire a DJ or a band cut down enormously on the cost of the wedding — definitely a bonus.

But the more I’ve thought about it, the more I’ve realized that there are a lot of other reasons why I’m glad we’re not doing the whole first dance thing, too. Just because something is “standard” doesn’t mean that it’s required — and as we’ve worked our way through the planning process, we’ve realized that the things so many of those “standard” wedding elements are supposed to represent just don’t ring true for us.

The first dance has had a lot of different meanings draped across it over the many centuries in which it's been a thing; during the Victorian era, for example, it was something the bride and groom did in order to be good hosts. These days, though, it's come to be less about etiquette, instead representing the start of the couple's new life together. And I get that. I can understand how having a dance that's meant to mark a new beginning would be appealing for two people who just said their "I dos"; it's kind of like how the cutting of the wedding cake (another tradition my partner and I probably won't be doing) is supposed to represent the couple's first meal together.

But here’s the thing: We’re not starting a new life together. We’ve been building a life together for seven years. We’ve lived together for three of them. We started planning for the long term together — both in practical ways, like working out our retirement plans in tandem, and in less tangible, more emotional ones — long before the idea of signing an extremely specific piece of paper together got added to the mix. While of course our relationship will continue to evolve over time — all healthy relationships do — functionally, being married isn’t going to change much about how it works on a day-to-day basis. Metaphorically speaking, we’re not building a whole new house; we’re adding an addition to the one we already have.

Ultimately, whatever the first dance is supposed to symbolize just doesn’t have any meaning for us. So… we’re not doing it. Why celebrate a marriage with an empty symbol? We’d much rather do it by hanging out with all our favorite people together — not swaying awkwardly from side to side beneath the glare of a disco ball, knowing that the act of doing so is mostly pointless.

Beyond the fact that I find both the “permission” and “protection” ideas appalling (I am no one’s property; I need no one’s protection; and I can decide for myself whether I want to get married, and if so, to whom, thank you very much), the circumstances are also much different now than they once were. For one, I’m not leaving my parents’ home when I get married, because I moved out well over a decade ago; the wedding doesn’t even represent the first home I’ve shared with my partner, since we've been cohabiting for years. Furthermore, the symbolism of the father-daughter dance — particularly when taken together with the first dance — treats “moving out” and “leaving the family” as equivalent, when that’s not necessarily the case. (Indeed, I’d even argue that doing so is incredibly outdated.) I’m not “leaving” my family; neither is my partner leaving his. We’re just continuing to work on developing a branch of it that includes both our families, which we’ve already been building for seven years, anyway. We’re adding to the whole, not starting from scratch.

And to anyone saying, “But what about your dad? Won’t he be just crushed?”: I love my dad. We have a great relationship. But my dad, like me, is not a dancer. Since neither one of us actually likes dancing, why would we force ourselves to do something we dislike so much in the name of a tradition that holds no meaning in this situation? It sounds like much more fun to celebrate by drinking wine, and eating cake, and talking about music and TV shows and books and big ideas and all of the other things we like to talk about together.

What it all comes down to is this: On a fundamental level, all of the symbolism wrapped up in both the first dance and the father-daughter dance utterly fails in our case. This isn’t to say that the dances are entirely devoid of meaning; if either or both hits you somewhere important, whether it’s the whole “farewell, here’s a new beginning” idea or not, by all means, go forth and dance your little hearts out. This is all just a reminder of the most important piece of wedding planning advice my partner and I have gotten as we've waded through the process: That just because there’s a way weddings are usually done doesn’t mean that your wedding has to be done the same way.

It sounds kind of like a no-brainer, but it's surprising how valuable it is to have that piece of wisdom validated. For me, that validation came from A Practical Wedding — the book written by the creator of the website of the same name, and one of the only wedding planning books I’ve read or plan to read — in an early chapter addressing the basics:

“Start thinking about throwing a party.” As a Type A person who is sometimes unhealthily preoccupied with making sure I do things "right," this was quite seriously the best thing anyone could have possibly said to me. There is literally nothing that says that you absolutely must have all of the industry standard elements at your wedding — and internalizing that fact is enormously freeing. Not only does it take off some of the pressure of having to pull off The Perfect Wedding (in our culture, it’s generally much more acceptable for a party to be flawed than it is for a wedding), but moreover, it’ll also help you plan the wedding that’s right for you.

In my partner’s and my case, that wedding doesn’t involve a first dance, a parent dance, or even necessarily dancing at all. We’re putting together a playlist full of our favorite tunes for background noise, so if people want to get up and get down, that’s totally fine — but it won’t be the centerpiece of the reception. We're doing it in a way that resonates for us instead.

Whether or not you agree with me that weddings should be fun (I think they should be, but that's just me), it’s hard to argue against the idea that they should be meaningful for the couple tying the knot. Otherwise, what’s the point of having a wedding at all?