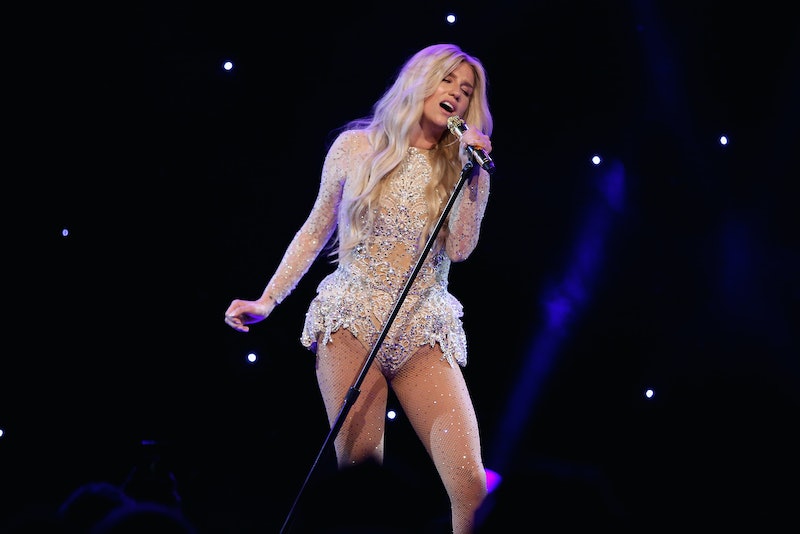 Friday was truly a beautiful day in the entertainment industry, because it marked the first time since 2013 that Kesha released new music. Along with DJ Zedd, Kesha released the new track "True Colors" — and trust me when I say it will bring anyone to tears. I mean, when the 29-year-old artist sings in the song, "All my life, one page at a time/ I'll show you my, my true colors/ And no, and no, I won't apologize for the fire in my eyes/ Let me show you my, my true colors, it ain't no rainbow," it's not hard to feel her emotion. Though the lyrics aren't entirely her own — the song was originally recorded by Zedd in 2015 for his album by the same name — between the fact that there are subtle changes between the lyrics in Kesha's cover and the lyrics in Zedd's original version, and the fact that she's singing it, it's all extremely powerful. With this new release, though, it's worth wondering: Will Kesha release a new album soon?

It's unclear at the moment, but given the release of this track, not impossible. In February 2016, a New York judge ruled that Kesha would not be let out of her six-album contract with Dr. Luke (real name: Lukasz Gottwald) following a lawsuit she filed against him 2014 alleging that he sexually assaulted and emotionally abused her for a decade beginning when she was 18. (For his part, Dr. Luke has denied these allegations: In October 2014, he filed a countersuit for defamation against Kesha, and in February 2016 tweeted, "I didn’t rape Kesha and I have never had sex with her. Kesha and I were friends for many years and she was like my little sister.) Following this ruling, a Sony attorney released a statement to the New York Times in February 2016 stating that the company remains committed to supporting Kesha's career:

Just before the release of "True Colors," Zedd himself — who is represented by Interscope Records, very much not a subsidary of Sony — tweeted that they had received permission from Kemosabe and RCA to release the track (which, again, was originally his track off his 2015 album of the same name), and that no loopholes were used. Sure enough, when you look at the credits for the song on Spotify, Interscope, Kemosabe, and RCA are all noted.

The fact that the song was allowed to be released is promising, as is the fact that there are subtle changes to some of the lyrics in the song to make it a track about reclaiming one's power. Though Kesha hasn't hinted at a new album in the works anytime soon, it strikes me as telling that Zedd's original line "We’ve escaped our capture/ Yet we have our masters" is changed to "I've escaped our capture/ And I have no master" in her version of the song. Something tells me, just as the song says, this is simply page one of her comeback.

There has been no official confirmation on whether or not Kesha is recording a full-length album yet, but she is still contractually obligated to release six more albums with Sony, according to New York Daily News. As this new single shows her valor and fearlessness, there's no doubt in my mind that a new Kesha album will bring an empowering message that will echo for years to come.

Following her filing of the lawsuit, the 29-year-old singer's lawyer released a statement to Billboard in October 2014 concerning the allegations:

Then, on April 3, Dr. Luke's spokesperson released a statement acknowledging the allegations to Rolling Stone.

More like this
Beyoncé Delivers “Soaring Vocals” On New Album “Renaissance”
By El Hunt and Radhika Menon
Everything To Know About J-Hope From BTS’ Solo Album ‘Jack In The Box’
By Stephanie Topacio Long
Adele’s All-Female Lineup Includes Kacey Musgraves, Mahalia, & Self Esteem
By Shahed Ezaydi
Somebody Convince Soccer Mommy To Make A Metal Album
By Samantha Leach
Get Even More From Bustle — Sign Up For The Newsletter