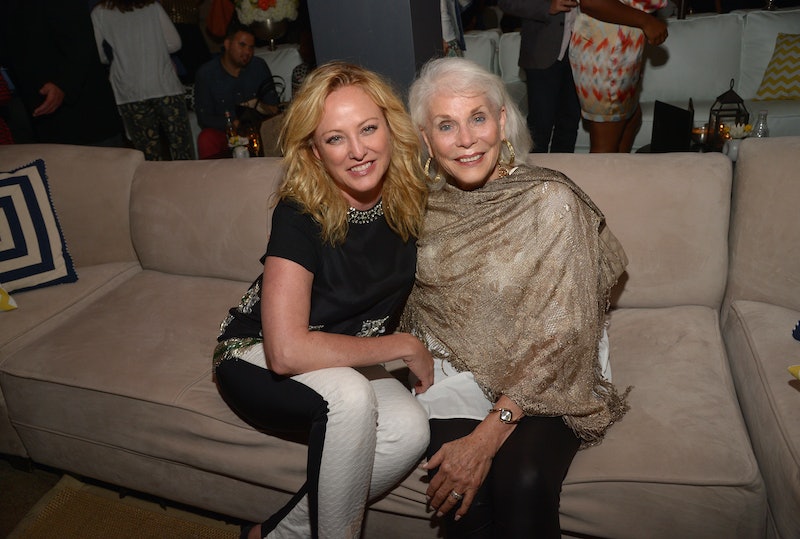 Anyone who's seen Gilmore Girls knows mother-daughter duos are a force to be reckoned with. While Lorelai and Rory are fictional, there's a real-life pair that should probably be on your radar. Virginia and Elaine Madsen made a documentary called I Know a Woman Like That and aim to transform society's notions about aging. They caught up with Bustle via phone to share the inspiration behind their film, which features conversations with 17 women in the upper decades of their lives. Ranging from Gloria Steinem to Rita Moreno, the interviewees prove that getting older can be empowering.

You may recognize Virginia Madsen from her roles in Candyman , Sideways, and most recently Joy. The Oscar-nominated actor is the producer of I Know a Woman Like That and explains that the doc explores "a new way to be old." She says, "There’s a lot of bad news out there about women and aging, and it’s not the whole story." Challenging the idea that getting older is a negative, Virginia explains,

It’s very exciting to see how younger women are embracing their feminism and their own personal power and taking control of their own bodies. So they need to have this information [about getting older] ... It’s time for us to take back our own identities and not let others define who we’re supposed to be at any given age.

Comparing the fight for age acceptance to that of body acceptance, she adds, "We see a lot of women talking about stop[ping] the haters from judging you for what size you are and how your body looks. So let’s go beyond that into how we look at ourselves within." This is an important notion; getting older doesn't have to be a source of dread. Society emphasizes the idea of erasing wrinkles or dyeing grey hair, but there's beauty in aging. Plus, opportunities don't run out, just because you get older. For example, one woman in the documentary is a competitive water skier in her 90s. "There’s a sense of power around these women — an aura of confidence," says Virginia.

As for I Know a Woman Like That's namesake, Virginia shared the following anecdote:

So, what exactly does it mean to be a woman "like that"? Elaine — an Emmy Award-winning filmmaker — expands upon the title. The 83-year-old says,

It’s really to know yourself. To be comfortable in your own skin. No matter if it comes time in your life when your skin doesn’t seem to fit anymore. It is having a lively sense of curiosity and allowing yourself to be surprised about changes and opportunities that you probably wouldn't have looked for before.

Elaine admits, "So far, I haven’t had a birthday that depressed me. At this point in my life, they’re an absolute joy."

Despite the Madsens' positive outlook, the notion of ageism is prevalent in Hollywood; just look at Amy Schumer's hilarious sketch, "Last F*ckable Day." The segment spoofs the idea that female actors reach a certain point where society deems them no longer attractive. When this came up in the conversation, Virginia recalls, "That was brilliant." Between Schumer's sketch and this documentary, women are standing up to age-related stereotypes. Even the fact that Jennifer Aniston was crowned People 's 2016 World's Most Beautiful Woman (and became the second oldest women to receive the honor) shows a positive shift.

Now 54, Virginia says it wasn't until her 40s that she found her "greatest success." Reflecting on aging in the spotlight, she says,

I think there is a lot of ageism for women who are in their late 30s, entering 40. They’re not sure what transition they’re supposed to make. They’re suddenly not an ingénue anymore. They’re not yet in middle age. It really is a struggle and there’s a lot of judgment.

In getting older, she says she's gained a sense of confidence, no longer holding back her opinions or conforming to society's expectations. She deemed the roles she plays now more "three-dimensional" and "fulfilling."

When it comes to advice for other women in Hollywood, Virginia shares, "I would say to younger actresses, look at Helen Mirren. I think she’s doing just fine. Look at Susan Sarandon and Geena Davis and look at me. We are forging ahead and we are playing really interesting women and you’re going to be able to do that too."

I Know a Woman Like That will be available across digital platforms and on DVD and Blu-ray on Tuesday, May 10.