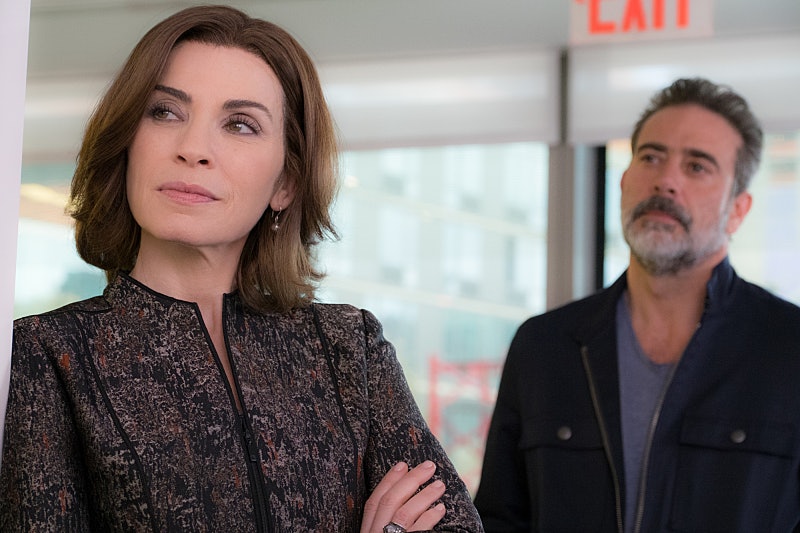 Still reeling from Sunday night's series finale of The Good Wife ? You're not alone. The internet at large seems up in arms about "the slap hear 'round the world" — aka the closing moments of the episode, in which Diane slapped Alicia Florrick and left our titular good wife standing alone in a hallway in tears. The general consensus seems to be that the final episode didn't provide enough closure for fans who had been watching the CBS legal drama for seven years. But what if it had? According to an open letter penned by co-creators Robert and Michelle King and published on CBS.com, The Good Wife almost had an alternate ending that would have been very different.

The biggest question on many fans' minds surrounding the finale is likely to be the state of Alicia's love life post-fade-to-black. In the episode, Alicia stated that she was going to divorce Peter and choose Jason… but once she had finally made that choice, Jason was nowhere to be found. Alicia thought she saw him at the press conference, but he ghosted — either figuratively or literally, it's hard to tell. Will she find him? Will Alicia and Jason be together? If not, will she go back to Peter? Or will she end up alone?

In regards to the ambiguity of this unresolved love triangle, the Kings wrote that, "We were tempted to have Alicia chase after a man in the end — stop him from getting on a train or an airplane at the last minute, hold him, kiss him. We like those endings." Now that would have been utterly different — in content, in tone, in conclusiveness, in pretty much every single way — than the deliberately frustrating ending we received. So why didn't they end it like that?

"There was something false about it here," the Kings continued. "It isn't who Alicia is. In the end, the story of Alicia isn't about who she'll be with; it's about who she'll be." I think even the viewers who were frustrated by the finale can agree that it wouldn't have been appropriate for The Good Wife to boil down to which man she ended up with. That shocking final scene may have been more of a downer than fans expected — but the Kings claim that was their intention.

"The ending was supposed to be unsettling," they wrote, acknowledging that the way their series ends is tragic. "Yes, Alicia's story contains tragedy. We still love her. And we hope you do too," they said. "But we don't think characters need to avoid tragedy to be embraced." And they claim that the ending they choose isn't completely pessimistic:

There is hope in the ending too — we believe. Alicia composes herself and marches toward the future. The two slaps to our mind are chapter endings and headings. If the slap that started the series woke Alicia up — helped her overcome her naivety about her husband and the world's corruption — then this second slap wakes her up to her own culpability. The question is what will she do with that?

We may not get to see the answer to that question unfold, but the Kings insist that bookending the show with slaps was always their plan:

We wanted this series—a series that stretched over 156 episodes—to have some shape, some structural meaning. So after we realized we wouldn't be cancelled after 13 episodes, we started to devise a vanishing point we could write toward. That structure, in our minds, was simple. The show would start with a slap and end with a slap. Each slap would involve Alicia. […] She would slap someone who victimized her at the beginning of the series; and she would be slapped by someone she "victimized" at the end.

It's interesting that television audiences are always clamoring for showrunners to have grand plans for their series — viewers despaired when it became clear that a large part of Lost was being made up as the writers went along, for example — and yet here we have a clear-cut example of showrunners having a vision from the very beginning, evading premature cancellation, ending on their own terms, and executing the vision exactly the way they always intended… and still the fans are unsatisfied. It makes me wonder if crafting a series finale is in reality a lose-lose situation; certainly the list of finales that satisfied every single viewer is far shorter than the list of finales that prompted vocal outrage.

And if at least some controversy is all but unavoidable, then isn't staying true to your artistic vision better than compromising that vision in order to pander to your audience's expectations? Whether or not you were one of the ones upset by the finale, I think the Kings deserve Kudos for sticking to their guns, likely knowing the backlash the episode would provoke.

More like this
'The Sandman’s Ending Is A Departure From Neil Gaiman’s Comic Book Series
By Kadin Burnett
Here’s When 'She-Hulk' Takes Place In The MCU
By Brad Witter
How Marvel’s 'She-Hulk' Changes Her Comic Book Origin Story
By Brad Witter
Here’s Why 'Pretty Little Liars: Original Sin' Season 2 “Won’t Be The Same”
By Kadin Burnett
Get Even More From Bustle — Sign Up For The Newsletter