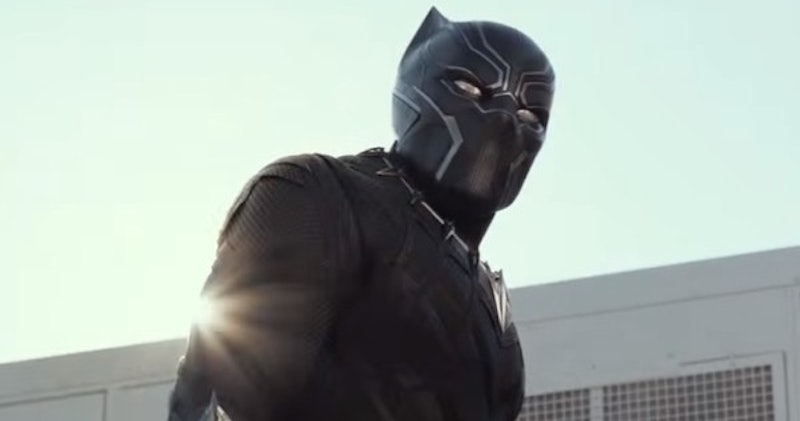 There were a lot of reasons that I headed to the theaters to see Captain America: Civil War, and the debut of T'Challa aka Black Panther was one of many. But I did T'Challa a disservice by not putting his debut at the top of my list of reasons for seeing this film, and I need to make sure that no one else makes this same mistake. T'Challa, king of Wakanda, is the representation that black people have been waiting for in the Marvel Cinematic Universe, and I didn't know that I was waiting for it until I saw it. In fact, T'Challa's debut in Civil War was so magnificent that it renders the representation that I have accepted in the past downright unsatisfying.

The main thing you realize pretty quickly when you watch Civil War is that T'Challa's storyline has absolutely nothing to do with Civil War. Before and after the war starts, T'Challa has a self-contained storyline. The Avengers are at each other's throats over the signing of the Sokovia Accords, and T'Challa is at Bucky's throat for his role in the death of T'Chaka, T'Challa's beloved father. There didn't need to be a civil war happening for Black Panther to be doing all that he does in this movie; he only needed to think Bucky killed his father somehow. He is on no one's side but his own, and, even better, doesn't even seem to care that there's an entire other movie plot going on around him.

And, once you realize that, you realize that T'Challa is giving us something that we have never gotten with the black superheroes in the MCU before. James "Rhodey" Rhodes aka War Machine is Tony's right hand man, and has very few storylines outside of his association with Tony. Even in the end, when Rhodes is crippled and permanently retired, we still see his pain and struggle through Tony's eyes, through Tony's pain, through Tony's guilt. The same applies to Sam Wilson aka the Falcon. He's Steve's right hand man. He was introduced mere seconds before Steve ran past him in Winter Soldier, and, since then, if you want to find Sam, you need only to look next to Steve. That is as much a commentary on the depth and purity of Sam's loyalty as it is on his role in the film, but it doesn't change the fact that it is largely his role in the film. Unlike T'Challa, we see Rhodes and Sam have very few scenes, and even fewer independent storylines, outside of what Tony and Steve are doing.

That leads me right into the other, and perhaps most powerful, part of T'Challa's arc in Civil War: he's not a hero. Not at first. T'Challa's stake in this battle is entirely selfish. He aligns with whomever serves his purpose, which is to kill his father's murderer. To that end, he goes against Steve, he goes against Tony, he goes against the Accords, he goes against multiple governments — all because, if Bucky is in his direct line of sight, then T'Challa is going to beat the ever-loving sh*t out of him. And yet the very second that he realizes that Bucky is not the one responsible for his pain, even after an entire movie spent chasing Bucky down, T'Challa turns around and leaves. Because Bucky is innocent and, worse, a victim, and T'Challa is heroic in his desire to not see Bucky punished for actions that were not truly his own. Hell, even when faced with his father's real murderer, T'Challa chooses justice over vengeance — because that's the kind of man that he wants to be.

T'Challa spends most of the movie as an incredibly flawed character. Arrogant, vicious, obsessive, judgmental, and selfish, he, at times, causes more trouble for Bucky and Steve than even Tony does. And the narrative calls him on that — he calls himself on that — before deciding that he can be better. That he will be better. That the morally grey path he has walked throughout this film is not the kind of ruler or hero that he wants to be. Even better, he takes steps to live up to that by not only bringing Zemo in to face justice but also offering Bucky a safe harbor in Wakanda to remain frozen until his mind can be healed. Bucky, the man he was trying to murder all through the film. To have a black man who is a king and a warrior, who is flawed and then redeems himself, who is in it for himself and no one else but in a way that is sympathetic, well. There was so much about T'Challa to love that he immediately became my favorite MCU character.

And his flaws are so important because they once again make him stand in contrast to Rhodes and Sam. Rhodes, who is one of the sane friends that Tony has keeping him on the straight and narrow, who is calm, rational, dutiful, and whose biggest flaw appears to be that he will sometimes be more loyal to the U.S. government than he is to Tony's mercurial moods. Sam, who is an actual angel who saw in Steve the kind of genuinely good person he wanted to throw his weight behind and has been nothing short of loyal, honest, and hilariously sarcastic in the wake of Steve's occasionally strange decisions. T'Challa has more flaws explored in a single film than Rhodes and Sam have had in five and four movies respectively, but those flaws don't stop him from being the kind of hero that we have always deserved. That I have always deserved.

Captain America: Civil War had a lot of characters to juggle, and it's for each fan to decide whether or not it juggled those characters well. But the one best serviced by the movie and by the plot of the movie was T'Challa, whose big screen introduction gave us a character of color unlike any other character of color we've had in the MCU so far. T'Challa is everything that Sam and Rhodes could have been, that Sam and Rhodes could be going forward. He not only managed to hold his own in an ensemble cast without being diminished or overlooked, but he shined so brightly that his subplot could have been an entire movie on its own. Black Panther was the first African-American superhero in the Marvel comics, and it truly feels to me like he's the first black superhero to be given any justice in the Marvel movies as well.

Now can we give that same depth and attention to Rhodes and Sam, please?