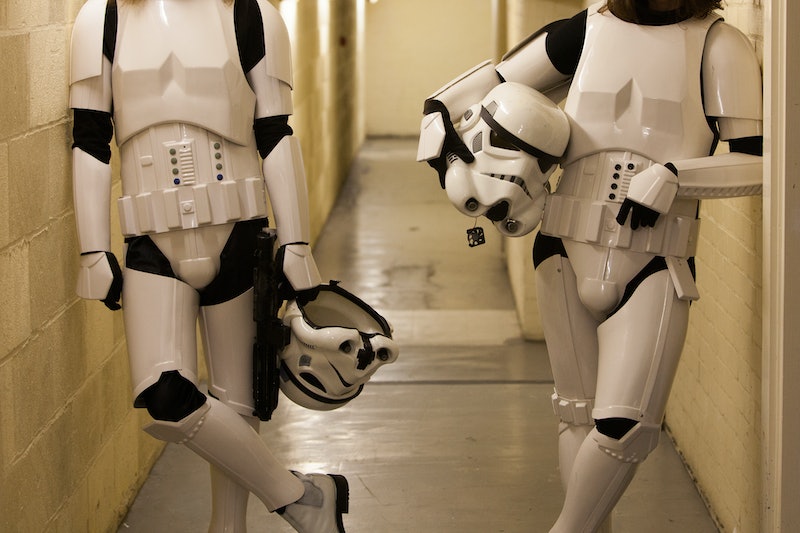 How big of a Star Wars fan are you? Can you name all of the actors in the film? No, I mean all of them. Do you know the name of the man behind Greedo's green mask? How about the lady alien with the pink, bulbous head in the cantina? Do you know Boba Fett's real name? The pilots? The stormtroopers? How about the 6'5" body inside Darth Vader's costume? A new Star Wars documentary, Elstree 1976 , which is now playing, follows the unknown actors behind the masks and beneath the elaborate costumes of George Lucas' 1977 hit sci-fi epic, highlighting an interesting conundrum between fan frenzy and the reality of the film business.

"How many actors can say they've got action figures?" unknown actress Pam Rose, who played the aforementioned pink alien, asks in the documentary. Plenty of actors, in fact, have been "immortalized in plastic" as is said in the film, but fans usually know who they are. Luke Skywalker action figures resemble Mark Hamill; Obi-Wan figures look like Ewan MacGregor; and the Rey figures that do exist certainly resemble Daisy Ridley. But what about those actors who you'd never recognize? Even if they appeared in one of the most beloved film franchises of all time, would fans know their faces?

Over the summer of 1976, a huge number of North American and British actors donned crazy outfits and headgear to populate what would become one of the most beloved cinematic universes of all time. Little did they know, as they pulled on uncomfortable makeup and clothing, that they would be immortalized on film, or, as it was for many of them, forgotten altogether. As director Jon Spira described the film in a director's statement, "It's a portrait of 10 everyday people, linked by this one shared experience, whose lives led them far away from it but then brought them back together by the power of the fan's will. It's a look at a strange little community and what it means to a normal person to be a visible part of the DNA of a cultural juggernaut."

The actors that Spira tracked down to participate in the film have become little-known legends since the film's premiere. They include David Prowse (who played the body of Darth Vader), Paul Blake (who played Greedo), Jeremy Bulloch (who played Boba Fett), and a number of other extras, such as Anthony Forrest (the "These aren't the droids we're looking for" stormtrooper mind-wiped by Obi Wan Kenobi). They form a community of people who are well-known among one another, and have become "famous" for appearing at conventions, but even major Star Wars fans may have no idea who they are. For the actors, it's a bittersweet experience, having appeared in something so famous, but being so unrecognizable that, for some, it's even become a bitter memory in their lives.

None of the actors knew how much of a huge global impact the Star Wars universe would have. "I had no idea. I would not pretend to say that I thought it would be the biggest blockbuster in history, no," said Angus Macinnes in the film (he played the Gold Leader X-wing pilot). "I thought it would be a successful movie within the genre, and that it would be a good movie."

This proves how little even those working in the film industry can predict how well a project may or may not do. "It was just like any other job, except you looked weird," added Rose.

There's an unconfirmed statistical anecdote among working actors that says that all of the famous actors that you can possibly name off of the top of your head represent only one percent of the actual number of actors working in the world. As a former actor myself, I understand the simultaneous frustration and elation that comes from being a background player in such a huge project. But Elstree 1976 manages to show not only how fickle Hollywood can be, but that fan communities can be that way as well.

Elstree 1976 certainly offers charming behinds the scenes tales of how the actors got their jobs and on-set antics. The story of Laurie Goode, the stormtrooper that hits his head, and Greedo actor Paul Blake asking an unknown George Lucas to get him a coffee, stand out as particularly hilarious. But the exposé of the shooting politics many background actors try to circumvent to get seen on camera, their post-Star Wars career struggles, and, most interestingly, the strict policies surrounding Star Wars conventions, offers insight into a filmmaking world and process that few are ever privy to. In an entertainment industry where celebrity has grown to epic proportions, it's good to remember the multitude of "little people" putting in countless hours of work to create some of our most favorite pieces of art.

It just goes to show you that, you may think you know all there is about your favorite film franchise or TV show, but not only are there always more secrets, but the people behind it may or may not love it as much as you do. "I have played Macbeth," Blake said in the film, "but my tombstone will read 'Here lies Greedo.' And that's fantastic."