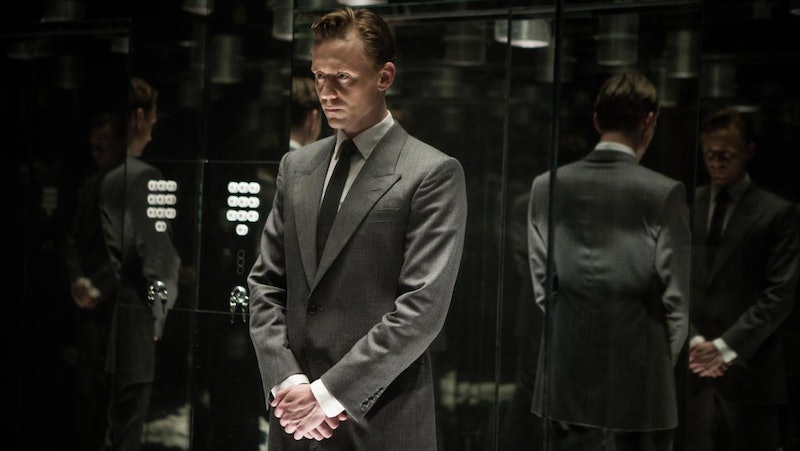 The new film High Rise has gained notoriety mostly for featuring star Tom Hiddleston nude in the trailer, but clearly there's a lot more going on in this mysterious film than that. There's also weird '70s techno-thriller music, breathtaking cinematography, and Hiddles giving off some serious Patrick Bateman vibes. It all adds up to some very intriguing and confusing marketing for the film, leaving many fans to wonder what High Rise is based on.

The film is set in the '70s, and takes place almost entirely within the confines of a spectacular high rise. The building is meant to be a society unto itself, with hypothetically everything its inhabitants need to live located on site. There is also a class structure within the building, with the poorest inhabitants being relegated to the lower floors while the rich live luxuriously on the top. This divide leads to a class struggle that turns violent soon enough, and chaos reigns down within the tower amid the warring factions of tenants that form. There are some heavy parallels to real life society on display here, but the film shouldn't get all the credit. That's because the movie is based on the 1975 novel of the same name by J.G. Ballard.

A number Ballard's other works from the 1970s have similar themes. His 1973 novel Crash was made into a film in 1996 (not that Crash ) about a group of people who are sexually aroused by car crashes (apparently a real thing). And 1974's Concrete Island, which tells the story of a man trapped on a man-made, fenced-in concrete island in the middle of a highway, forced to survive only on what exists within his crashed car. Like these novels, High Rise also deals with the intersection of technology and humans' more basic, primal instincts.

The film High Rise seems to be sticking pretty closely to the story of the book, even keeping the original's 1970s setting and opening scene. Though it does take some liberties with the plot in order to make a more cohesive story for a film, given that the novel is structured largely as a series of flashbacks.

So to sum up, High Rise is based upon a controversial novel by visionary author J.G. Ballard that deals with people's baser instincts coming to the forefront as humankind is hurtled toward the future. And if that doesn't sound like something you'd be interested in, well, there's still plenty of Tom Hiddleston eye candy.