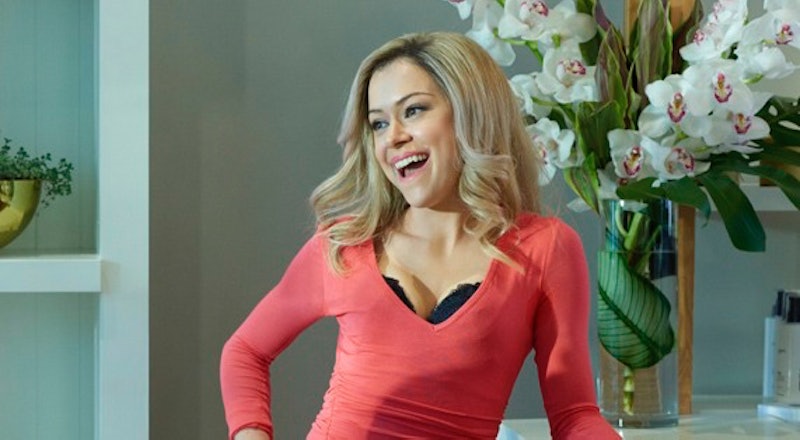 While watching Orphan Black, it's so easy forget that the same actress is playing fully half of the characters on your screen. Every Project Leda clone is so different, they might as well be played by different people: prickly Sarah, bright Cosima, uptight Alison, crazed Helena. But perhaps no clone is so vastly different from the rest than Krystal Goderich, the bubbly (and blonde) beautician we first met in Season 3 when she was kidnapped by two Project Castor clones. Well, it took halfway through the season, but Krystal is back on Orphan Black Season 4 — finally! — and while that couldn't be better news for us fans, it couldn't be worse for her sestras… because wherever Krystal goes, chaos follows, of course.

We first encountered her in the episode's opening scene, going on at some length about the trauma of her kidnapping and her boyfriend's death while totally beating up her beefy kickboxing instructor. But that was just an amusing prologue to Krystal's real contribution to the episode: showing up at the Brightborn clinic at the exact same time as Cosima and Donnie in another amusing case of what the show does best: mistaken clone identity.

Desperate to keep Krystal distracted so she and Cosima wouldn't cross paths, Donnie posed as an employee and gave the beautician a massage — which ultimately led the talkative Krystal to divulging her real purpose for being at Brightborn: not to get pregnant, but to investigate their connection to the Dyad Institute. (She called herself a whistleblower and even compared herself to Edward Snowden.) But just when it seemed like Krystal was on to something, her source of information was revealed to be a tabloid that claimed stem cell research had given a woman "eyelid teeth."

At least one interesting thing came out of Krystal's interaction with Donnie: a mention of the conspicuously missing Delphine. Remember, the last time we saw Krystal in Season 3, she had been kidnapped by Dr. Nealon and was being held at Dyad in a Rachel disguise so Nealon could help the real Rachel escape the Institute's clutches. In this episode, Krystal informed Donnie that if "that French blonde doctor" hadn't saved her, then she would be "physically dead right now."

Halfway through the season, and we've finally gotten our first mention of Dr. Cormier that wasn't simply Cosima wondering about her ex-lover's whereabouts. Does that mean that Orphan Black is laying the groundwork for a shocking comeback for Delphine? Unlike blown-up-by-a-grenade Paul, the good doctor's fate was left deliberately ambiguous. At this point, it would be more surprising if she didn't show up in the back half of Season 4.