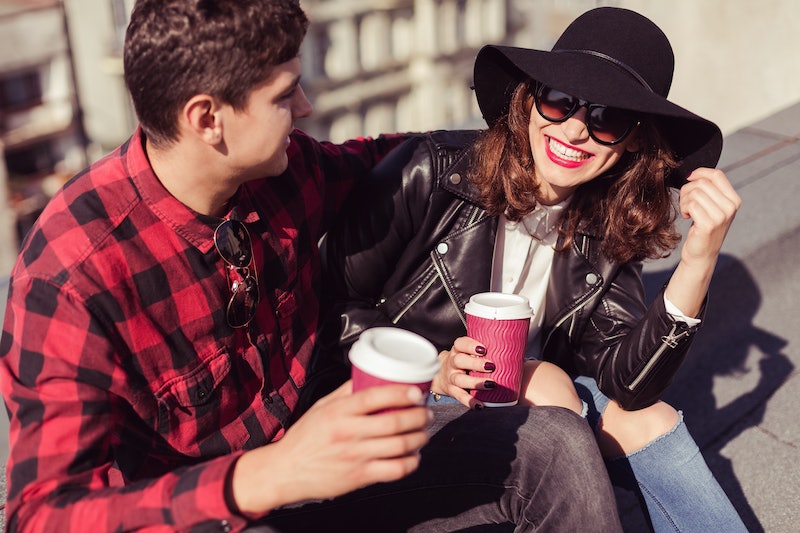 One of the perks of being in a committed relationship is the fact that there is someone out there who cares about you and has your back. Sounds nice, doesn't it? It can be, but unfortunately, there are certain behaviors that can start out as affectionate and quickly turn into dangerously possessive behavior.

The idea of having a partner who is too controlling may initially sound annoying at best and like breakup material at worst, but Lisa Aronson Fontes, Ph.D., relationship facilitator and author of Invisible Chains: Overcoming Coercive Control in Your Intimate Relationship, says unhealthy domination by a partner is actually a psychological phenomenon called "coercive control," and that no good can come from it. Marti Loring, Ph.D., social worker and author of Emotional Abuse , told Women's Health that there is much more danger to "coercive control" than you might think, and that it can easily turn into emotional abuse, which "negates a woman's very being," she says.

Many women who find themselves in destructive relationships often don't see it coming from the start. Whatever their partner says or does at the beginning may seem endearing or representative of their SO's true love for them. It's important to know the warning signs before things escalate, though, so you can know when it's time to speak up to a trusted friend or family member if you feel like you're in a compromising situation.

Here are six behaviors that straddle the line between sweet and controlling.

1. They Text You Constantly When You're Apart To See How You're Doing

One or two texts to check in can be nice, but it's different if your partner is sending you one message after another wondering where you are, what you're doing, and who you're with. If you feel like they're taking a particularly strong interest in your personal life, they may have crossed the line.

A quintessential characteristic of a controlling partner is someone who thinks they have a right to know about your every move. While it's nice to know you've got someone waiting at home for you after you've wrapped up a night out with your friends, you shouldn't feel like you have to stay in touch with them up until the minute you walk in the front door.

2. They Want To Help You Pick Out Every Outfit

Wanting to know what clothes you've got on all the time is a step into jealousy town, even if they frame it in a way that seems innocent. Consider it a red flag when your partner always wants to help you pick out which dress or skirt you're going to wear to work or a social outing. It's nice if you guys help each other out with fashion choices every now and again, but it becomes possessive behavior when they feel the need to have a say in every single outfit you step into.

Needing to control what you wear ultimately comes from a place of not trusting you and feeling like they own you, which translates to them not wanting you to look a certain way to other people. Never put up with that; it destroys the equality that should be present in every relationship. Besides, I don't know about you, but this just screams overprotective dad to me.

3. They Offer To Accompany You Everywhere You Go

If your partner insists on tagging along on every errand you run and it makes you feel a bit strange, don't overlook it — it's a clear warning sign that they've got some issues with control. This is another flavor of wanting to have power over everything that you do and the people that you see.

Healthy couples certainly spend time together, but they also know the importance of independence. A partner who wants to follow you everywhere most likely doesn't trust you, and there's nothing sweet about that.

4. They Tell You They Love You Over & Over Again

What could be wrong with expressing love? Well, there is a fine line between showing good old-fashioned affection and passive aggressively shoving your love onto someone in an attempt to manipulate them. This is a typical move by a controlling partner, and it can be done subtly, which makes it all the more difficult to pinpoint.

Loring told Women's Health that this eventually chips away at a woman's confidence, making her doubt herself and the sensations she's experiencing. As soon as you feel icky about how much your partner is saying "I love you," speak to someone about it so you can get an outside opinion.

5. They're A Bit Too Quick To Defend Your Honor In Public

Ah, the chivalrous type who would never let your name be smeared in front of others. In theory, it's a thoughtful gesture — but it's rarely executed in a healthy way. A stable, caring partner respects you as an adult and knows that you can take care of yourself, especially when it comes to normal social situations where you're being harmlessly teased by your friends. A person who struggles with "coercive control," on the other hand, will constantly try to protect you, which is their way of establishing ownership over you. It's also a way for you to depend on them, making the two of you inseparable.

6. They Constantly Tell You How Wonderful & Perfect You Are

Again, don't get me wrong here. You should have a partner who thinks the sun shines out of your ass — but they should also be able to have this opinion without dumping it on you every five minutes. Doing so indicates deep-rooted insecurity about your commitment to them, and by persistently telling you how pretty and smart you are, they are displaying their paranoia around the prospect of losing you. This kind of behavior also paves the way for them to guilt trip you later on at some point, insisting that nobody else could ever appreciate you the way they can.

If this sounds like your relationship, know that you're not alone. It's believed that two-thirds of couples have experienced emotional abuse before, and one-third have experienced it chronically in a relationship. But that also doesn't make it OK to ignore: the long-lasting effects of such abuse range from increased risk for mental illness and even suicide, to an inability to enter into a healthy commitment ever again.

Even if you don't think your relationship is emotionally abusive, you'll know in your gut whether the behavior is dangerously leaning over to the controlling side. All it takes is the smallest instinct. As soon as you recognize it, confide in someone you trust and/or a therapist, because you have enough on your plate without also dealing with partner who's obsessed with managing your every move.