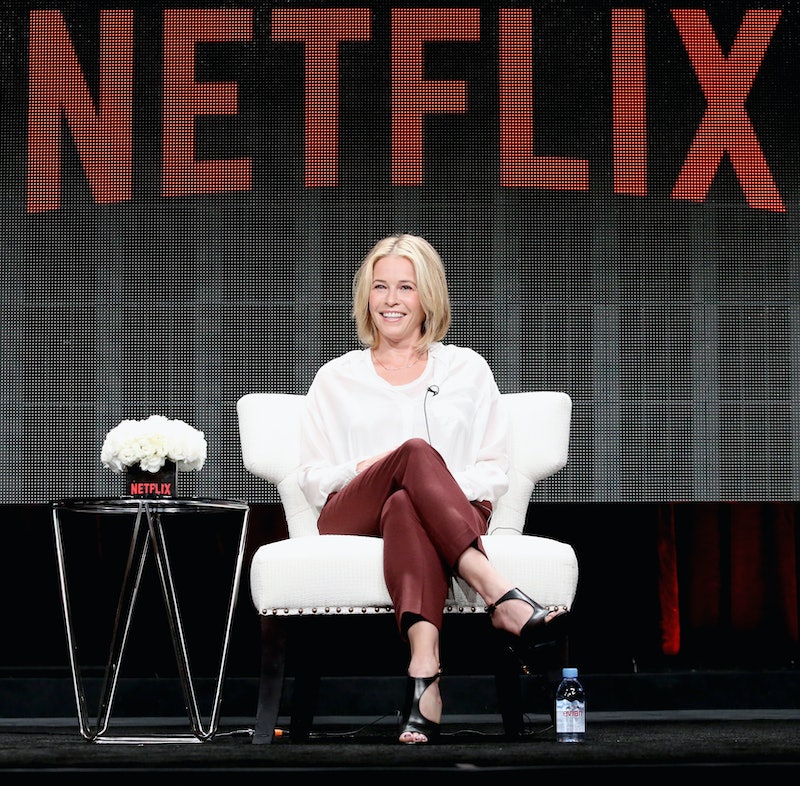 Chelsea Handler is back on our small screens in the best way possible — and I'm not just saying that because I can't get enough of her adorable dog, Chunk, who hangs around the set looking dapper in his blue bandana. When Handler's new Netflix series, Chelsea was announced, fans learned the premiere would contain a segment called Netflix University. She naturally kicked off by explaining why her show would provide a better education than any Ivy League school — all for just $9.99 a month. And, the interviews in Chelsea's premiere episode highlighted education in an important way.

Handler's first guest was John King Jr., Secretary of Education at the United States Department of Education, who possesses not one but four undergraduate and graduate degrees. Handler jokingly warned him to not be too intimidated by her high school degree. (It's safe to say she's done more than OK for herself.) King explained that his path wasn't an easy one — he chose to become an educator because school saved his life after he lost both parents by age 12. He recalled a teacher from fourth through sixth grade who King credits with saving his life. "He invested in me and made school a path to opportunity for me," King explained. In fact, this teacher attended King's recent swearing-in ceremony when he was appointed Secretary of Education.

Handler recalled a third-grade teacher who made her feel special, further emphasizing that educators have the power to impact our lives in a way that we never forget. Next up, her friend Pitbull flew in from Miami to talk about his educational experience and the two charter schools he's opened in Florida and Nevada. The rapper discussed his childhood challenge of constantly switching schools due to being in foster care and emphasized the importance of remembering that nobody is "dumb" — we all just learn in different ways. For example, Pitbull found that reading wasn't an effective way for him to learn, but hands-on experiences really made educational concepts click for him.

Like King and Handler, Pitbull was quick to remember the most important teachers in his life. His second-grade teacher in Rosewell, Georgia, recognized that he was in a tough spot at his new foster home and looked out for him. And, his high school drama teacher, Hope Martinez, is the one who got him involved in music. The only thing she asked was that he thank her when he won his first music award — today, countless awards later, Pitbull thanks her every single time.

Although there was plenty of humor included in the segment, Handler's premiere episode drove home the important message that all the educators and teachers out there deserve major credit — especially the ones who look out for the kids who may otherwise fall through the cracks.