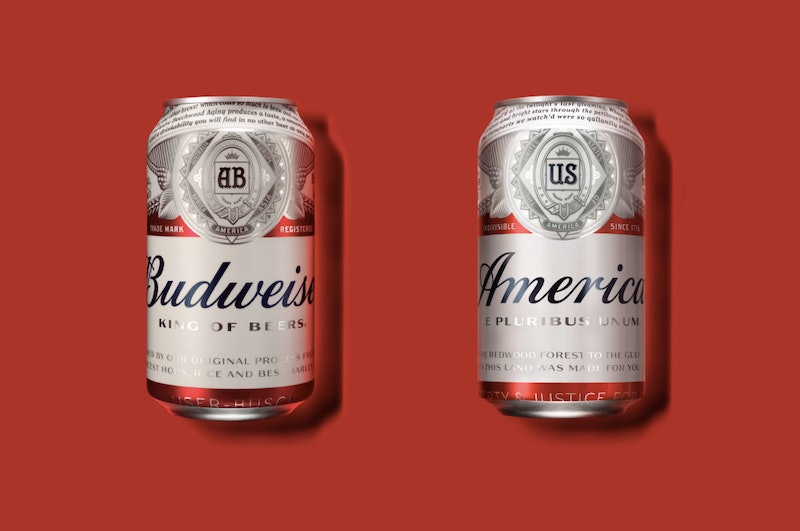 So long to the days of staring at the American flag during the national anthem at sporting events — now that Budweiser is changing its name to "America," we can just cut out the middle man and stare straight at what we came there for. Are they allowed to just name something after a country, you might ask? I don't know, friends. That's a question for America Ferrera's parents on another day. Regardless, the temporary change will go into effect on May 23 through the November election — and if a certain someone whose name rhymes with Fonald Frump ends up staying steady in the polls, you'll need all the "America" you can get.

In case you aren't already living that Budweiser Life (aka, crying profusely at puppy commercials into your Super Bowl nachos), Budweiser is actually produced by Belgian multinational corporation Anheuser–Busch. The temporary change is keeping with Budweiser's summer campaign “America is in Your Hands,” celebrating the next few months of the aggressive American-ing we have coming up.

“We are embarking on what should be the most patriotic summer that this generation has ever seen, with Copa America Centenario being held on U.S. soil for the first time, Team USA competing at the Rio 2016 Olympic and Paralympic Games,” said Budweiser Vice President Ricardo Marques in a press release. “Budweiser has always strived to embody America in a bottle, and we’re honored to salute this great nation where our beer has been passionately brewed for the past 140 years.”

The design of the can itself will stay true to Budweiser's iconic look, so hopefully consumers won't get too confused in grocery stores. It was designed in partnership with Jones Knowles Ritchie New York, and maintains the same font both where it says "America" and has replaced its "AB" with "US". The television spots and advertising for the product will hit your eyeballs at the beginning of June, so keep on the lookout.

Now all we need is a backup beer called "Canada" just in case November doesn't turn out the way we want. Just remember, fellow Americans who may also be fleeing across the border — don't drink and drive and haul all of your earthly belongings across a border. Do all that, and then drink whatever the hell you want.

More like this
25 Quotes About Love To Share During Pride Month 2022
By Madeleine Aggeler and Emma Garza
How To See The Lunar Eclipse On May 15-16, 2022
By Kaitlyn Wylde
Are We Drinking Rosé All Wrong?
By Sheila Yasmin Marikar
TikTok's Favorite Bartender Thinks Mimosas & Bloody Marys Are Out For Brunch
By Alexis Morillo
Get Even More From Bustle — Sign Up For The Newsletter