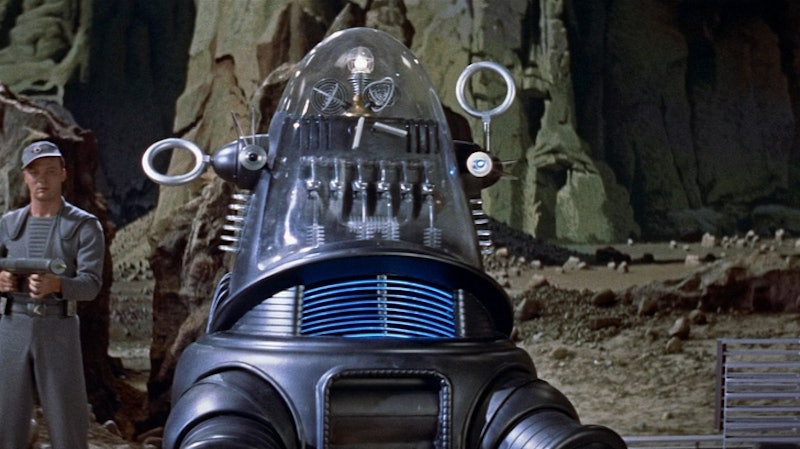 Loving Science Fiction novels isn't a choice. It's just something that happens to you: one minute you're a normal kid reading about little girls with horses and little boys who go to wizard school, and the next minute you have an encyclopedic knowledge of Larry Niven's Known Space universe. It's a blessing and curse. Sci-fi fans get to explore an endless assortment of distant galaxies full of lumpy-headed aliens, but we also have to deal with the sci-fi fan struggles.

Science Fiction (or Speculative Fiction, if you're going to be like that about it) has been around for a while now. It's spawned countless books, comics, movies, TV shows, and real life inventions. It's home to geniuses like Douglas Adams and Octavia Butler. And yet, it's not a genre that gets a lot of respect. You're either hated on for reading sci-fi at all, or hated on by other sci-fi fans for not reading the right kind of sci-fi. Kurt Vonnegut put it best when he said: “I have been a soreheaded occupant of a file drawer labeled 'science fiction' ... and I would like out, particularly since so many serious critics regularly mistake the drawer for a urinal.”

So if you're a sci-fi fan (especially—gasp!—a female sci-fi fan) you're probably well acquainted with these struggles:

1. When other fans want you to prove your sci-fi cred

Look, sci-fi people. Let's all be honest with each other: there's no such thing as a "fake geek girl" (or any other kind of fake geek person). No one is pretending to like William Gibson or the Vorkosigan Saga Series to sound cool. Sci-fi fans need to stop demanding that other sci-fi fans prove their sci-fi love (you're making us look bad in front of all the other genres). There's plenty of room for sci-fi fans of all kinds to argue about faster-than-speed-of-light travel together in peace.

2. Loving a book or author that no one else has ever heard of

Where are the other die-hard Fredric Brown fans? Anyone? No? There's so much great science fiction out there, and sometimes you discover a gem that you just have to talk about. But even among sci-fi fans, there's no one who shares your all-consuming love for this one forgotten science fiction genius. Oh, well. At least no one will ever make an unsatisfying movie of your unknown fave...

I mean, you understand that adaption necessitates some changes from the source material. BUT they didn't have to cut out your favorite scene! Or change it so that Dr. Manhattan is framed for destroying New York instead of that giant alien bug! Or cast that definitively non-white character with a white actor! With their promise of explosions and laser guns, it feels like sci-fi books are more susceptible to Hollywood nonsense than any other genre.

4. When other people have only seen the movie

Part of the sci-fi lover's curse is to be endlessly explaining plot points to the non-sci-fi lover. Because that was all happening in an alternate timeline. And in the book they explain how the apes came to power. And if you had actually read the book, you'd understand why Arthur and Trillion ending up together is actually kind of weird. ...do you want to just borrow the book?

5. Getting hate from other genres

All genres are created equal. There is some beautiful, lyrically written sci-fi and some pretty silly literary fiction out there. And yet, many people will assume that just because a book contains aliens or time travel, it's automatically inferior to a book about a failing marriage or a white man having a mid-life crisis. Don't let the genre bullies get you down, though, because they're just missing out on a lot of great books about robots.

6. There is NO SOUND in space

Yes, writers should be able to take artistic liberty. But sometimes, "hard" sci-fi will break the rules of physics so badly that it distracts you from the story. (And then you have champions like Larry Niven: after super-fans pointed out that the Ringworld from his novel Ringworld would probably drift into the sun due to physics, he wrote a sequel in which the Ringworld drifted into the sun.)

Science Fiction is all about the what ifs. And, if you read enough sci-fi, those what ifs start plaguing your dreams. What if there really is an alien invasion? What if the alien invasion has already happened? What if everyone you know is actually just a carbon copy of themselves? What is the dolphins really do fly away and abandon Earth? What if that new Soylent stuff is made of PEOPLE?

8. Having vast stores of useless information

I mean, it's not useless information. Knowing the history of the House Atreides and the economic importance of spice melange comes in handy if you ever need to draw parallels between the Dune books and the political climate in the Middle East. But when it comes to breaking the ice with your co-workers, and all you can think of is facts about sandworms.... it's significantly less useful.

9. When there’s some representation but not enough

There is diversity in science fiction. There just needs to be much, much more. And those great sci-fi books with leads who are women or people of color need to get some more love. And also all science fiction authors who aren't white men need to get some love. Since the sci-fi genre is so often adapted into different mediums, diverse science fiction in books can go a long, long way. Plus, sci-fi is all about surpassing the boundaries of human imagination... surely we can imagine some more representation than this?

The trouble with sci-fi is that it reminds us of how much possibility lies out in the unexplored regions of space (and also it makes us want our own rocket boots). But all sci-fi fans must deal with the crushing reality that real life space travel takes years, and we might not make contact with intelligent life forms anytime soon. But, on the bright side, an ape-based apocalypse is also looking fairly unlikely.

Once a sci-fi fan, always a sci-fi fan. It's tough, always having to think about space and the philosophical implications of artificial intelligence. Of course, we read other genres, and we don't love all sci-fi indiscriminately. But, as sci-fi lovers, we do spend a lot of time in distant worlds, discovering new ideas, and imagining people running around in jumpsuits. And that's really not so bad.