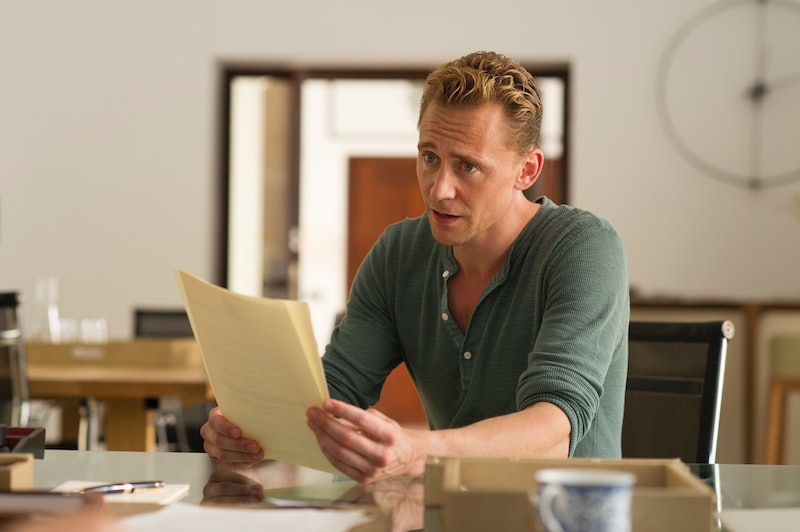 When it comes to spy games, like those that are featured in The Night Manager, it's a given that you will probably never know whom to trust. In the fifth episode of the AMC miniseries, Tom Hiddleston in The Night Manager suffered a major setback when he significantly underestimated Hugh Laurie's illegal arms dealer Richard Roper. Hiddleston's character Jonathan Pine put himself at major risk by reporting that weapons would be smuggled across the Turkish-Syrian border to his wrangler Angela Burr. Unfortunately, Roper knew he had a mole in his operation and did not send the weapons over the border. While Pine has stayed loyal to his mission and Burr, it appears to Angela in Britain that Pine may no longer have allegiance to her and may be serving Roper.

Since all of this is incredibly stressful for Pine, he ended up dropping his smoldering demeanor for a moment as he watched the bust that he had risked his life for not occur. Hiddleston's face struggled to comprehend where the hell the weapons were and if you hadn't already been distracted by Hiddleston's piercing blue eyes while watching The Night Manager, you surely were when they were filled with confusion in the May 17 episode.

Yes, yes, espionage is tricky and all that and I fear that Pine's cover may be blown since he returned to the Nefertiti Hotel in Cairo, Egypt in the final moments of the second-to-last episode. However, my heart broke more for Hiddleston's subtle look of shock as he tried to repress the discovery that Roper had the upper hand. And I blame that solely on the fact that seeing Hiddleston in any sort of pain — confused pain or otherwise — causes me immense pity. I'm only a mere mortal woman after all!

Hiddleston is such a phenomenal actor that he is able to emote a wide range of confusion, whether he's performing in a TV miniseries like The Night Manager or just living his life. Here are 13 GIFs where Hiddleston's perfect face highlights an array of confusion that anyone can relate to, in honor of his character getting duped in The Night Manager.

When Counting Is Too Hard That It Makes You Confused

No need to be embarrassed if you aren't an expert mathematician since Hiddlestoners know he is notoriously bad at math.

When You're Incredulously Confused

Hiddleston allows the eyebrows (and that curly blonde hair!) to do the talking.

When You're Only Pretending To Be Confused

Hiddleston can't help but be polite in all situations.

When You're So Hurt That It Makes You Confused

For when the betrayal hurts so bad that the fiery tears could almost burn Hiddleston's icy blue eyes.

When You Can't Believe Someone Just Asked You That, Confusion

Just imagine how many inane questions that this poor, beautiful man is asked on a daily basis. Yet, he handles this confused look with ample amounts of grace.

When You're Pretending Not To Be Confused, But You Really Are

The little blinks give Hiddleston away.

When You're Full Of Sheer Terror & Also Confused

This is a pretty complex emotion and Hiddleston nails it as Loki.

This brand of confusion is a bit passive aggressive, but Hiddleston still manages to make it charming.

When You're At A Complete Loss Of Words Due To Confusion

Even a formally trained actor like Hiddleston gets dumbfounded and speechless sometimes.

When You're Confused About The Weather

You want to make sure to keep this confusion dramatic to help distract from your questions about meteorology.

When You're Wondering What The Hell Is Going On Confusion

Let the anger slowly simmer when expressing this brand of confusion.

When You're Confused Like A Toddler Having A Temper Tantrum

Loki is the master of this type of confusion.

And When It All Finally Becomes Clear