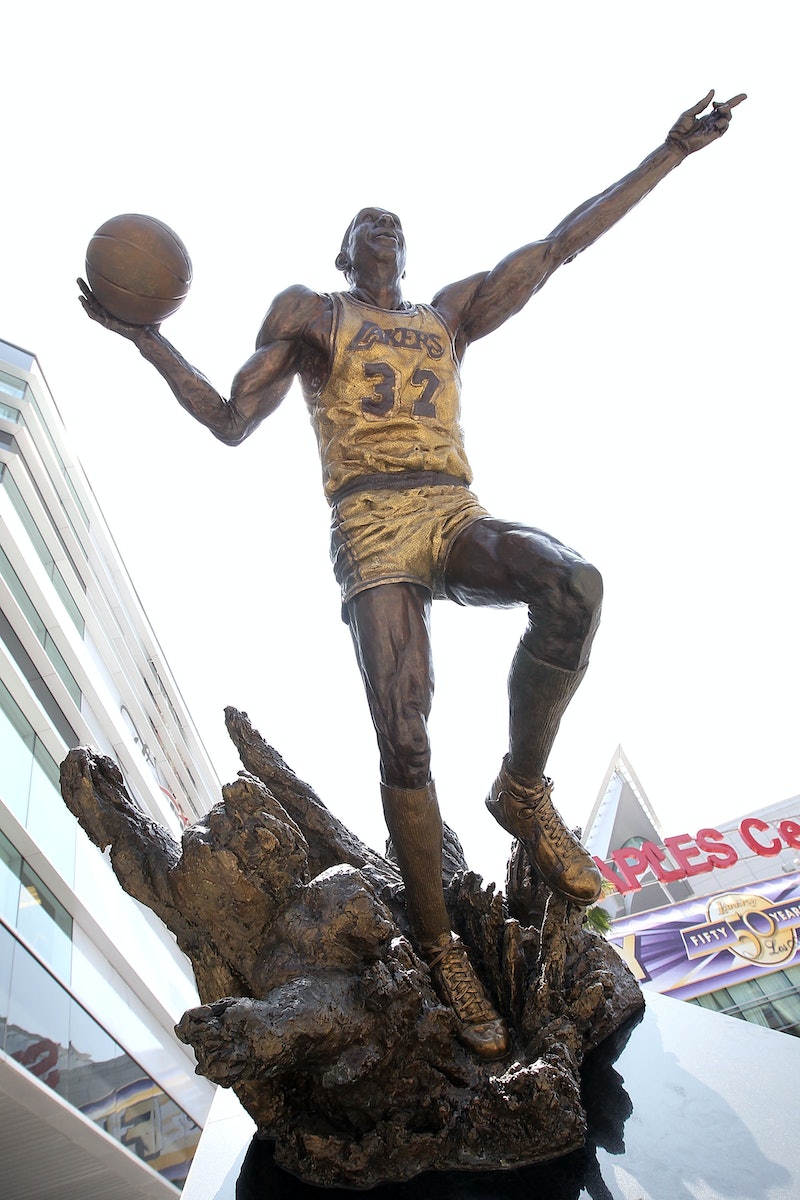 Trying to find gender-neutral baby names can be difficult — almost all baby name books and site divide names into "boy" and "girl," without much attention paid to the overlap. And for sports fans looking for an athlete-inspired, gender-neutral baby name, the struggle is magnified — after all, sports are a pretty gender-segregated world already. But that doesn't mean there aren't some great athlete names that work for kids of any gender.

Gender-neutral names are becoming more popular in the United States, and it's a pretty awesome trend. After all, the gender binary is pretty high up there on the list of ridiculous and unnecessary social constructs. There's no need to keep on reinforcing it for the new generation. Plus there are also some pretty awesome gender-neutral names out there — not that they're always the easiest thing to find.

Parents have been naming children after sports figures for a long time now. It's a way of honoring your heroes and giving your kid a connection to something you love, something that matters to you, all at once. And even though sports have typically reinforced the gender binary pretty heavily, there are actually a lot of athlete names that work for girls or boys (or kids of any other gender).

Magic Johnson was one of the best basketball players of his generation, is considered one of the best point guards of all time, and has been inducted not once but twice into the Basketball Hall of Fame. After retiring abruptly in 1991 after contracting HIV, he also worked to dispel myths and stereotypes around HIV/AIDS and to fight discrimination against people living with the condition. In other words, he's a great namesake for any kid, and his name works well regardless of gender.

Dara Grace Torres is a former competitive swimmer who won twelve Olympic medals, including four golds, and formerly held three world records in swimming events. She's also one of the only Olympians to ever win medals in five different Olympic games. Her name, Dara, is used as name in many different languages and cultures, sometimes for boys and sometimes for girls. So, it should work for you regardless.

Picabo Street named herself at the age of three, picking the name of a nearby town. Later in life, she went on to be a champion alpine ski racer and Olympic gold medalist. And since her name is mostly made up anyway, there really shouldn't be any restrictions on who can have it.

Arthur Ashe was a former world number one in tennis and the first black player on the U.S. Davis Cup Team. He remains the only black man to have won Wimbledon or the U.S. Open. And he was also one hell of a tennis player. The name Ash works, typically as a nickname, for boys or girls (or anyone in between), but tack a silent "e" onto the end, and you're also honoring one of the greats of tennis history.

Ellis Burks played 18 seasons of Major League baseball and at one point led the National League in runs, slugging average, and total bases, all at the same time. His name, Ellis, is also gender-neutral. So any baseball fans might want to take advantage.

Swin Cash is a WNBA player with 14 years and three championships under her belt. She's also been part of the U.S. National team multiple times, won an Olympic gold medal, and works for ESPN during the off-season. She also beat cancer back in 2007. Her name, Swin, is not one that you see everyday, which really just means people don't have preconceived notions about its gender. So, feel free to give it to any baby.

Yao Ming is a retired professional basketball player and now part of the Basketball Hall of Fame, but who might be most widely known for being almost unbelievably tall — 7 feet 6 inches! Born in China, he began playing in the United States in 2002. He's married to his childhood sweetheart and supports numerous charitable causes, including the Special Olympics and conservation efforts. His family name also works as either a masculine or feminine Chinese first name.

Torii Hunter is a former Major League Baseball player who won none consecutive Golden Glove Awards and was part of the All-Star Team five times. His last name, Hunter, also makes a good first name — for a person of any gender.

Tenley Albright was the first American woman to win an Olympic gold medal for figure skating, which she won in 1956. She originally began skating to help regain muscle strength after suffering from polio, and she also won a silver medal in 1952. After 1956, she retired from skating, attended Harvard Medical School, and became a surgeon at a time when it wasn't a career open to many women. Basically, she was a trailblazer all over the place — making her an excellent namesake for any child.

Lleyton Hewitt is a former top tennis player who became the youngest man to ever rank as number one in the world in 2001 at the age of only 20. He retired this year. His name, Lleyton, is pretty awesome and could conceivably work well for any baby.

Peyton Manning really needs no introduction. The man is a football legend, having played 18 seasons in the NFL and won five MVP trophies — not to mention two Super Bowl rings. His name, though typically spelled with an "a" rather than an "e," is also gender-neutral, meaning you can honor this football hero no matter what. And the spelling just makes it all the more distinctive.

More like this
Here’s What Sarah Jessica Parker’s Canned Cosmo *Actually* Tastes Like
By Emma Garza
What Is “Night Luxe?” Breaking Down TikTok’s New Aesthetic
By Courtney Young
Here's The Spiritual Meaning Of The May 2022 New Moon
By Nina Kahn
Your Moon Sign, Explained
By Nina Kahn
Get Even More From Bustle — Sign Up For The Newsletter