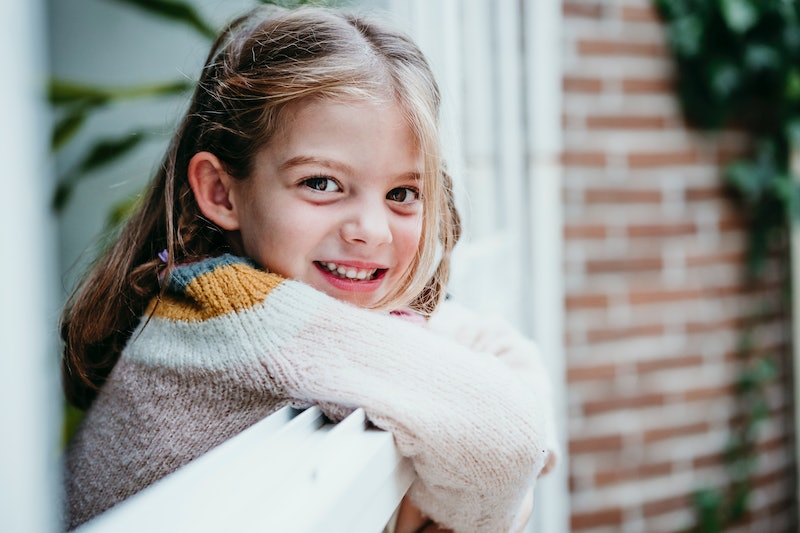 If it seems like baby names for girls are more fun than baby names for boys these days, it's not your imagination: Modern day parents are apparently more likely to give unusual baby names to girls than to boys. Why, though? What gives, exactly? Well, according to Matthew Hahn, professor of biology and informatives, “The culture is much more accepting of out-there girls’ names.” Hahn recently spoke to Time about this odd naming phenomenon, and it seems that the trend is also true of invented names. Furthermore, society's willingness to let unique girls' names slide, but not unique boys' names, has been true for a long time; however, the recent increase in the number of unique and non-traditional baby names has made it even more clear.

Indeed, based on baby name data from the Social Security Administration (SSA), which counts all names used at least five times in a given year, it seems that the number of unique girls' names vastly outnumber those given to boys. In the most recent year for which data is available (2015, for the curious), there were 18,993 unique names for girls and 13,959 for boys, which is a pretty considerable gap.

So why is this? Part of it seems to be due to the cultural tendency to name boys after their fathers or grandfathers. Although girls are sometimes named for family members, it doesn't happen as often (which is also kind of sexist — no one wants to uphold a legacy through their daughters? Come on!). But that seems to be only part of the issue. Maybe the more fundamental problem is that people are just less willing to be creative with boys' names — which taps into a whole separate set of issues in the way we construct masculinity.

The fact that people are more cautious when giving boys creative names might stem from the fact that any sort of "girly" name for boys is cause for mockery in a way that "boyish" names aren't for girls. For instance, it's becoming more common to see girls and women use male nicknames — such as "Charlie" for Charlotte or "Lou" for Louise — but there's been no corresponding acceptance of boys using traditionally feminine nicknames. No one is calling an Alexander "Lexie," for instance, even though an Alexandra can be "Alex." And a boy named Grayson probably wouldn't go by "Grace," even though a girl with the same name might.

In other words, our culture says it's OK if our daughters want to be a little boyish, but that it's not OK for our sons to be in any way feminine. Which sucks, especially since it's just one part of the way in which we trap boys within rigid gender confines.

It will be interesting to see what this means moving forward in terms of the growing trend of using gender-neutral baby names. On the one hand, gender-neutral names might help break down the gender barriers. But it's also worth noting that historically, names that were once gender-neutral, like Leslie, tend to become more and more associated with girls as time goes by. So will these gender-neutral names wind up as girls' names once parents get worried their son might have the same name as a girl in his class?

Personally, I'm hoping we just break down the gender binary instead.