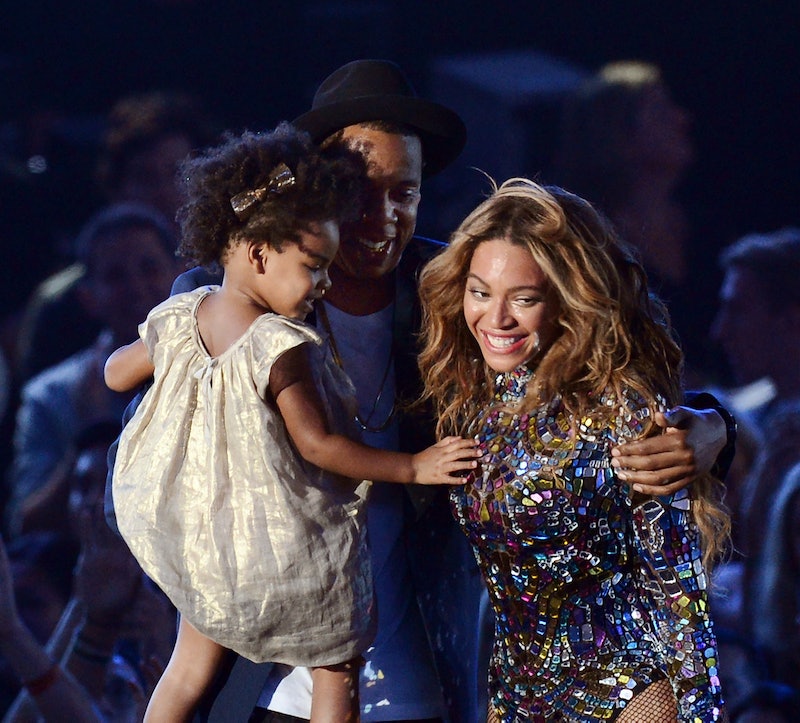 To the untrained eye, the Instagram photo Gwyneth Paltrow posted on Saturday of Blue Ivy Carter and Apple Martin celebrating Apple's 12th birthday captioned, "Birthday brunch squad #godsistersandbesties," might seem strange given the eight year age difference between the two girls. But the fact that Blue got an invite to Apple's birthday sleepover, held the night before mom Beyonce's Los Angeles Formation concert, isn't, in fact, all that surprising given the fact that the girls' parents have a long standing friendship that has lasted for over a decade and counting. Seriously — the Beyonce/Gwyneth friendship, and that of their young daughters, goes way back.

Just back in February, Paltrow Instagrammed an adorable shot of Blue and Apple before Bey and Chris Martin took to the Superbowl Halftime stage together, and the full history of the Paltrow/Martin/Knowles/Carter friendship is a long and complex one, beginning in the mid-2000s. And while Paltrow and Bey may seem like an unlikely match, it makes perfect sense: both women are talented, beautiful, health-conscious, musically-inclined, entrepreneurial celeb moms who've grown up in the public eye (plus, Martin and Jay Z both love music, football, and being creative). Seeing that their daughters are "godsisters," this friendship train doesn't appear to be losing steam anytime soon. Here's an abbreviated history of the two couples' bond.

Of the famous couples' unlikely friendship, which started when they were introduced at a New York City benefit, Paltrow would tell Howard Stern in 2015, "I normally don't do that, but in that particular case [it worked]."

2007: The Couples Hang Out At The Academy Awards

I mean, this is the gold standard of squad goals.

Feb. 2011: The Couples Are Seated Together At The 53rd Grammy Awards

Oct. 2011: Martin Bros Out About His Friendship With Jay Z

"He's a super cool guy, and he's genuine," Martin told Pitchfork , adding that "Of course I want to be friends with Jay Z - he's cool as f*ck."

But oof, that choice of words is not great.

Sept. 2012: Bey Shares A Card From Paltrow On Her Website

In a surprisingly candid move, Bey posts a hand-written birthday card from the actor, which reads: "For dear sweet BB on the occasion of her 31st birthday... We love you so very much. Love Gwyneth, Chris, Apple, Moses."

“When she is working onstage, she has more power than any woman I’ve ever seen,” Paltrow told the fashion bible. “She would never say it and has never said it, but I feel she knows with every fiber of her being that she is the best in the world at her job.”

Feb. 2013: Beyonce Gushes About Her Friendship With Gwyneth

"She is incredible; she's a great friend on every level," Queen B told E! News of Paltrow at the red carpet premiere of her HBO doc, Life is But a Dream. "I think for us, protecting our daughters is so important and…keeping things on our own terms, so I will still be protective and make sure [Blue Ivy] has a childhood and a great time."

While staying with the the GOOP creator during the Los Angeles leg of her On The Run tour, Bey took this fierce shot.

Paltrow told the audience, "To sing 'Take My Hand Precious Lord' that was first sung to her by her own mother, here is my beautiful friend, Beyoncé."