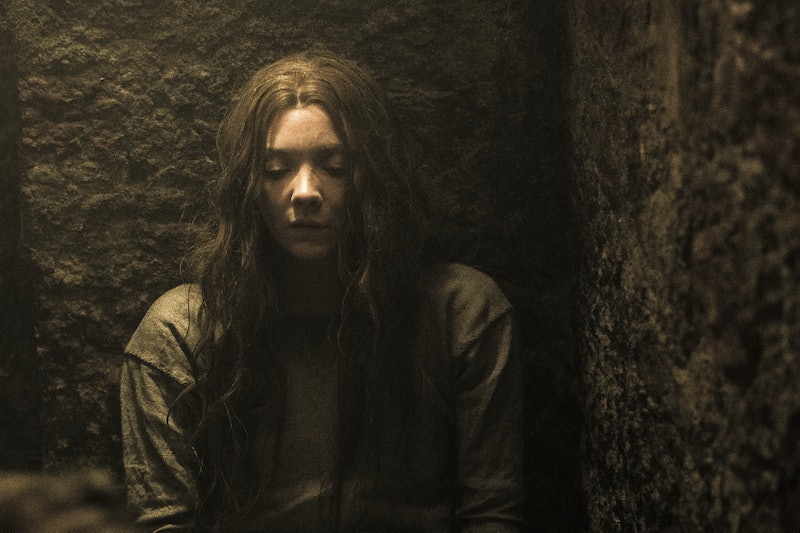 Guys, Maragery is in quite a pickle right now. She and her brother, Loras are still rotting away in some dirty, little cells while The High Sparrow continues to riddle and smooth talk his way around King Tommen. She received a brief moment away from her dark prison on tonight's episode while The High Sparrow told her tales of his sinful youth and basically told her to get right with the gods if she truly wants to be let free. When he let her finally see her brother, it was clear that these two are seriously starting to crack. Margaery seems to be figuring out a plan, but Loras was definitely in worse shape and seemed to be at the end of his rope. After all, who knows how long they have been in there? I have faith that Margaery will get them out because she is a boss, but how will she do it? Will Margaery do that awful walk of shame on Game of Thrones that Cersei endured? I really hope not. One of those was more than enough to watch.

For a while, it seemed like it was inevitable that Margaery would have to make that same naked walk through the slums of King's Landing in order for her to have any lick of freedom anytime soon. Now, it would appear that there are other options forming that may negate the need for public humiliation. On tonight's episode, Cersei and Jaime finally joined forces with Lady Olenna Tyrell, and the plan is to make sure that Margaery doesn't make that atonement walk. Cersei's motives are clearly not pure but she is on the side of wanting to make the High Sparrow/Faith Militant pay and that's all that matters here. She is ready to get things done.

Let's hope we don't see another shame walk on Game Of Thrones. I think the point was made and we don't need to witness another unbearable few minutes of a nude female lead being pelted with garbage. Margaery needs to get out of her cell another way, and I am hesitantly placing my bet that Cersei will have a hand in her freedom.