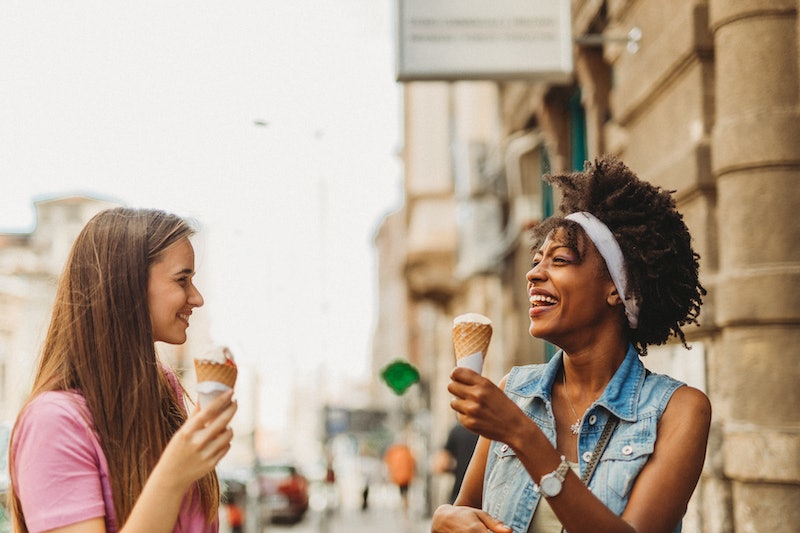 Your friends IRL are way more interesting than the people who digitally "react to" your weekend activities, and they come in all kinds of types. Some friends you've known for years, while others are buddies you've recently acquired at your new job. Whoever they are, and however often you spend time with them, they all bring something different to your life.

Still, friendship in your 20s and 30s can be a strange thing. We're suddenly hit with these responsibilities and life changes that we never had to juggle before, making it difficult to navigate who we should spend time with, and why we should spend time with them. As important as it is to have that one best friend who will pee in front of you and finish your sentences, it also pays to have a camp of solid friends on call at a moment's notice, each of whom offer you something a little different. In fact, science says that women are actually wired to maintain multiple friendships at once; researchers at UCLA worked on the "Study on Friendship in Women" and found that women respond to intense stress by making and keeping close friendships. It's how we survive.

So here are the 11 types of friends you need to get you through life.

You may not want a cheerleader in those moments when you're not feeling down, but it could be exactly what you need. Having someone in your life who swears by the "half glass full" philosophy can rescue you from your pit of cynicism when you need it most. You may only be able to take them in small doses, but your life is better because of them all the same.

In fact, being around this optimistic person can do great things for your physical health, especially in your older years. Harvard researchers found that, out of 2,564 Americans, the people in the group who had a positive outlook on life had the lowest blood pressure. They're also less likely to suffer from heart disease and viral infections. Stay friends with that bubbly personality for as long as you can, and maybe their attitude will rub off on you.

You know, that person you can blast Backstreet Boys in the car and dance for joy with. Some call this the "crazy" friend, and that title works too. Whoever it is, make sure they're adventurous and unafraid of consequences, because you need that kind of fun every once in a while. The Goofball will never cease to make you laugh in whatever situation you find yourselves in, which is great for your overall health. Bursts of laughter can stimulate circulation, relieve stress, and bring oxygen-rich blood to your organs.

You need a friend who tells it like it is. They'll be the one to tell you that the person you're dating is a real jerk, or that it's time for you to ask for that promotion already. My Brutally-Honest Advice Giver has been known to make me cry once or twice, but in the end I thanked her for it, because I needed to hear the truth.

How boring would your life be if you were only friends with people who looked and acted like you?! You need a friend who helps you see the world in a brand new way, if only to spice things up every now and again. This buddy could be someone who's from a different culture or country; it could be someone who has a completely different taste in music, movies, and fashion. Either way, you're just so intrigued by their very existence. They'll keep you open, curious, and in a constant state of learning, which is pretty much the definition of eternal youth.

Working out on your own can be a real drag, which can prevent you from reaping all the benefits of exercising, like reduced depressive symptoms and better sleep patterns. Having a friend in your life who enjoys being active can be a helpful motivator when you need a gentle nudge to get moving. In 2012, the Annals of Behavioral Medicine published a study proving that college-aged women accomplished more in aerobic exercises when they were told giving up early would result in a less impressive performance by their gym partner.

6. The Kick Back & Relax Friend

Don't tell my other friends, but I consider this friend to be the most indispensable. Any person who lives on planet earth deserves a sidekick who will rush over at a moment's notice, armed with gummy bears and ice cream, to watch several consecutive hours of Sex and the City reruns. Period.

No matter how much you change — and you're bound to in some ways — it's comforting to know there's someone who accepts you for who you are, and who you've always been. Although it's not uncommon for childhood friends to grow apart, do your best to keep at least one friend around who's been there for years, as they're likely to be your most loyal friend.

Plus, they'll keep you happy: studies in 2005 conducted at the University of Illinois found that that people who had strong, long-term ties with these kinds of friends and family were the least likely to suffer from depressive symptoms.

Each one of your friends inspires you in their own way, but there's probably one person you've always admired immensely, whether it's because of their successful career or what they've overcome in their personal life. You have a lot to gain from staying close with this friend. They can offer you sound advice on how to move forward in your own life, and they'll always be there to encourage you when you go through tough times.

This friend will take your call any time you want to complain about your dating life, and they'll do so without ever judging you for your choices. If you're lucky, they'll even help you escape a particularly horrendous date, if you need them.

We can all benefit from having a friend who pushes us to be better. A person who constantly challenges you will propel you forward, whether it's at work or in your personal life, and the two of you probably have no idea you're helping each other along the way.

Researchers at Wayne State University surveyed 423 college students about friendship. They listed out several main qualities that had to be fulfilled in order for the students to consider a person in their life a good friend, and one of them was "stimulating companionship." The individuals who had friends that checked off this element, along with a few others, showed higher levels of overall happiness in their lives.

Just make sure it doesn't cross into frenemy territory, because science says that kind of toxic relationship can raise your blood pressure and increase your likelihood to be depressed. That's a kind of friend you could probably do without.

Here's the one who will stick up for you no matter what. Often times, this is the friend who used to defend you in school when you were getting incessantly teased by the mean kids. But even if they're a new friend, this particular individual will stand up for you — no matter what.