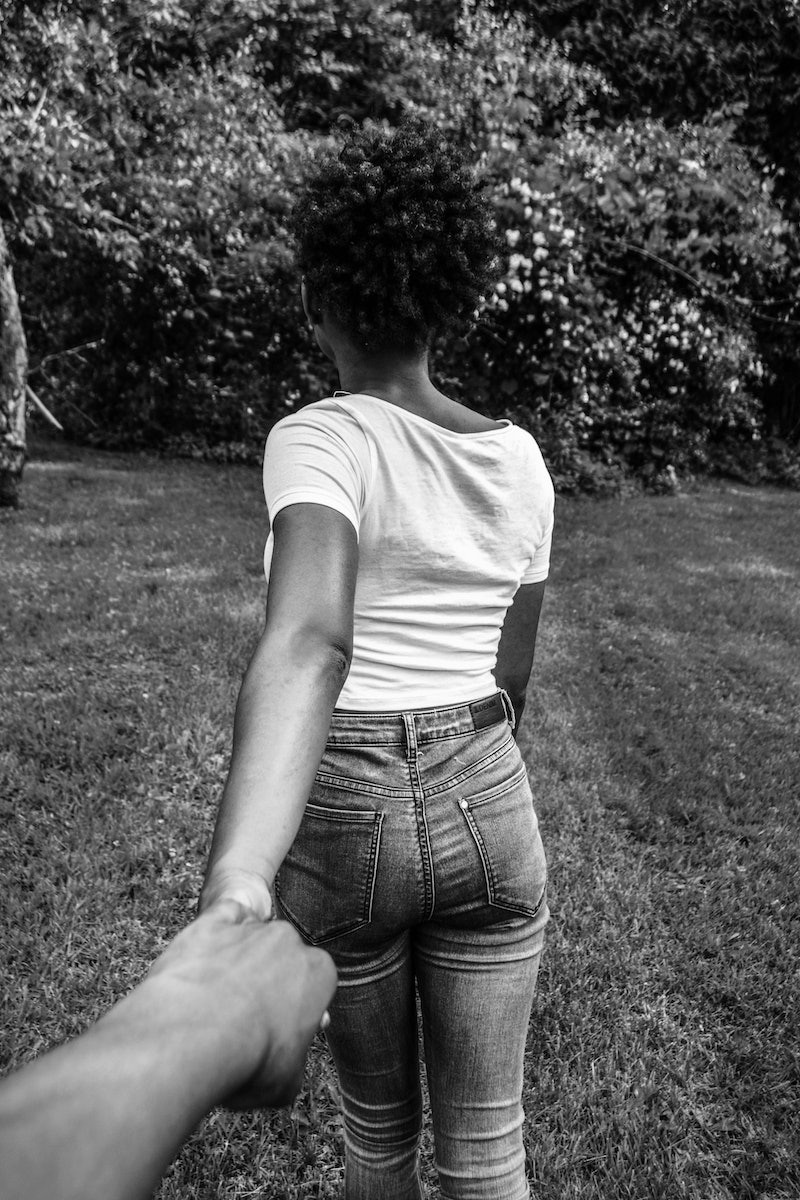 Lately, I've been thinking about high-waisted jeans, and what it means that they're still in style. I used to love the look of all my high-waisted clothing — but I especially loved the feeling my high-waisted jeans gave me. With the tight denim creeping ever so slightly into a wedgie, wearing them felt sexy, like someone was grabbing my ass all night, the inseam like a finger resting on my introitus. (I guess I wasn't the only one who thought so; wedgie jeans are an actual, marketed trend now.) The effect just wasn't quite the same with low-rise pants. I didn't feel confined and amplified at once, my waist sucked in, my relatively small ass and hips accentuated in contrast. In other words, they didn't create the hourglass shape that current societal beauty standards had taught me to covet.

High-waisted clothing is, of course, anything but new. In ancient India, high-waisted saris were the standard, since saris that exposed the belly button were considered by some to be sign of an adulterous woman. For centuries, high-waisted trousers were the style for any well-dressed or aristocratic man. By the 20th century, a certain pattern emerged: the low-rise bellbottoms of the 1960s and '70s were a reaction to the high-waisted trousers of the '40s, while the '80s were a high-waisted backlash to the low-rise hippie trend. The late '90s and early 2000s, in turn, were a low-rise, hip-hugging rebellion to what became known as "Mom Jeans," while the era of fashion we're currently in appears to have made Mom Jeans ironically cool.

If this reactive cycle of fashion is any indication, the backlash against high-waisted jeans must be coming soon, though you wouldn't know it looking around my office. My (much more) stylish coworkers are donning high-waisted fashion more than ever, and the trend doesn't appear to be going anywhere.

"As a plus size woman, the reality is that low-rise silhouettes can be pretty uncomfy," Bustle's Associate Fashion & Beauty Editor, Marie Southard Ospina, tells me. "[Lower-rise pants] sometimes dig into my visible belly outline (or under it), or poke at me in weird ways. So a high-rise with a decent amount of stretch is generally my go-to if I'm after something comfortable and easy."

Many straight-sized women find them more comfortable as well. "In my opinion, high-waisted bottoms are way more comfy for sitting, standing, and even eating, because they don't cut into my belly like low rise bottoms do," Bustle writer Elizabeth Enochs adds. "Also, I feel like I don't spend as much time thinking about what my tummy looks like since I switched from low rise jeans to high-waisted, and that feels great."

It appears that one woman's liberation is another woman's prison. Because while wearing high-waisted jeans made me feel sexy, at the same time, they made me feel very uncomfortable. When I sat in high-waisted jeans, my belly would press against the waistband, making me feel bloated and hyper-aware of my stomach. Even when I wore stretchy high-waisted skirts or bought the jeans a few sizes too big, the effect was still uncomfortable. I continued to wear them anyway, thinking they made my ass look nicer.

When I sat down, they reminded me of all the ways I could have flatter abs. They made me feel like someone was grabbing my ass, and that my ass was worth grabbing. In other words, they made me feel sexy and confined at once. If the 50 Shades phenomenon has taught us anything, perhaps it's that we're in an era where many women crave sexual liberation and restraint in equal measure.

But for Ospina, wearing high-waisted fashion feels anything but oppressive. "I also think there's a sense of body-reclamation to these jeans. In the earlier 2000s, it was all about the low-rise cut. I do think we felt more general pressure to show off skin as a way to be accepted or praised. High-rise cuts are a more modest style, but maybe that just means we're moving away from expectations and into the realms of choice and personal expression," she says.

Parsons professor and Fashion and Style Historian Patrick Hughes agrees that the trend's resurgence has a lot to do with body positivity. "I think fashion is talking a lot about a return to curves and about embracing all kinds of body types right now," Hughes tells Bustle. "That emphasis on the rib cage that the high-waisted jeans give can make your waist look really small. The celebration of that form — the hourglass — is the look that’s currently in fashion."

So while high-waisted jeans may be "body positive" for some, they do seem to reinforce a different, potentially equally-unattainable, beauty standard: the voluptuous woman with a small waist. Kim K's dramatic hourglass shape is the current ideal, and until that's not true anymore, I believe the effect high-waisted jeans creates will likely continue to be in style. And in a world where even waist training is back, perhaps they are a better alternative.

"We have gone through so many trends with corsetry, to the point of not wearing corsets of any kind, or a girdle, or anything like that," Hughes says. "But all the talk of exercise and gym memberships [in the last few decades] have led to the internalization of the corset, in a lot of ways. Maybe high-waisted jeans act as a bit of external corsetry."

That's actually exactly how they always felt to me. They shaped me into society's coveted hourglass shape, yet left little to the imagination. When I sat down, they reminded me of all the ways I could have flatter abs. They made me feel like someone was grabbing my ass, and that my ass was worth grabbing. In other words, they made me feel sexy and confined at once. If the 50 Shades phenomenon has taught us anything, perhaps it's that we're in an era where many women crave sexual liberation and restraint in equal measure.

Whenever I wore high-waisted styles, women would comment that they loved them, but that they could never wear the trend themselves. "I just don't have your kind of body," they'd say. "My waist isn't tiny." Little did they know how much I hated my stomach at the time.

"I think it'd be silly to ignore that high-rise silhouettes are likely in style, at least in part, because of social standards for what is and isn't 'flattering,'" Ospina says. "Although I have issues with that term — it's synonymous with 'slimming' 90 percent of the time; something I don't think women should universally feel forced to aspire to — I don't doubt that some retailers are thinking high-rise cuts will do wonders at tummy-tucking and aesthetic downsizing."

Whenever I wore high-waisted styles, women would comment that they loved them, but that they could never wear the trend themselves. "I just don't have your kind of body," they'd say. "My waist isn't tiny." Little did they know how much I hated my stomach at the time. High-waisted fashion was one of the many ways I attempted to restrain it, despite the fact that these styles left me more uncomfortable — both physically and emotionally — with my perceived flaws.

In the end, it took a doctor's orders to get me to retire my high-waisted clothing. I was binge-eating at night and depriving myself during the day, trying to control my belly. As was the new trend, I believed gluten was making me sick. I felt bloated all the time, and was constantly constipated. When I went to a gastroenterologist, they did an endoscopy to take a look at my colon. The doctor told me I had no signs of celiac or a gluten allergy. I did, however, have something called a "hiatal hernia," a condition in which part of the stomach pushes up through the diaphragm muscle. His suggestions? Don't overdo it on alcohol, coffee, stress, or spicy foods — and don't wear any tight, high-waisted clothing.

Over the next few years, I began to heal my eating habits, as well as my relationship with my body. I started wearing skinny, stretchy, low-rise jeans, and reintroducing gluten. Whether I was especially bloated or not that day, my jeans never let me know. My stomach was free, and when I got a job and relationship that made me happier, my bloating and constipation all but vanished. I was relieved to realize, by my late 20s, that I did not have to be in any way uncomfortable to feel or look sexy. Still, I kept my high-waisted jeans for special occasions. It wasn't until this year that I got rid of them for good, resolved never to feel confined by my clothing, even a little bit, again.

If high-waisted fashion is your liberation, then by all means, keep looking fabulous. But for me, I realize now, they were really just another self-imposed restriction to free myself from.