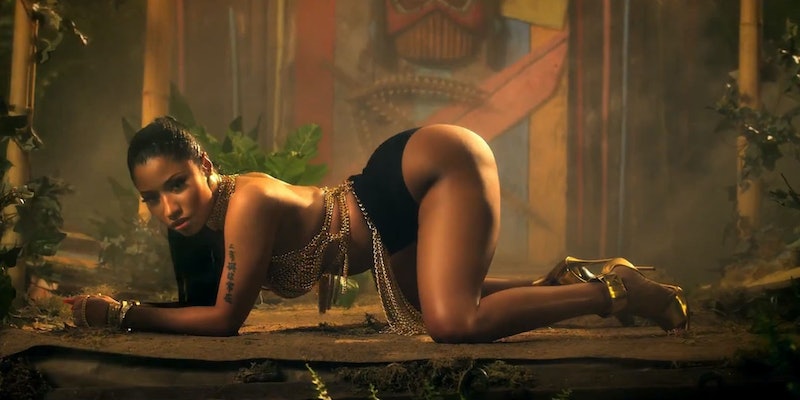 You've heard the saying: "Girls always want the body type they don't have." Today, this phrase could easily be changed to, "girls always want the booty type they don't have." With the rise of Kim Kardashian and Nicki Minaj, the "ideal" butt has definitely changed over the past decade. Of course, this isn't necessarily a bad thing. Actually, it's kind of awesome that big butts are having a moment — because they're beautiful. But the whole concept of the "ideal" butt (or the ideal body) is what leads women and girls to wish for different body types in the first place.

If you're plus-size, society tells you to be thinner. If you're skinny, society says you're not a "real" woman because "real women have curves." On top of our culture's obsession with the size and shape of women, our beauty standards have also been consistently whitewashed. Before Beverly Johnson graced the cover of Vogue in 1974, a woman of color had never been featured on the magazine's cover — and that was barely 40 years ago. When Nicki Minaj released her bootylicious cover of Anaconda last year, the public was outraged — but when Victoria Secret angels sport thongs on the runway or on the cover of Sports Illustrated, they're basically revered as goddesses in human form.

How can women and girls not feel dissatisfied with the shape of their backsides (or any other part of them for that matter) when the "ideal" female body type is ever-changing, predominantly centered on white women, and consistently unattainable for most women? It's madness. All butts are good butts, and the "ideal" butt has changed so much over the years, that stressing about it is pointless.

Just to prove the futility of it all, here are 11 examples of how America's "ideal" butt has changed over the years.

By the early 1900s, our beloved bustle was already out of style — but don't think that means there wasn't still plenty of emphasis on the badonkadonk. The "perfect butt" was part of an all-over hourglass shape which rose to popularity thanks to the illustrations of Charles Gibson. Gibson used his talent and influence to glorify the substantial and round behinds of his ideal woman — the "Gibson Girl." Since Gibson's illustrations were the 1910s equivalent of today's high fashion photographs, they had a big impact on what the butt of the day was "supposed to" look like.

As The Flappers started to hit the pop culture scene in the roaring '20s, Gibson's curvy butts ceased to be the beauty ideal they once were. As androgynous fashion exploded in popularity, flatter, "boyish" hinies became the new sexy.

In fact, flatter everything was the beauty ideal back in the '20s. Women who were curvier wore special bras to flatten their chests, and they even went on starvation diets in order to look as curveless as possible. Yikes.

The 1930s ushered in the Golden Age Of Hollywood, (1930 through 1950s) so the '30s saw the introduction of curves, but only slight curves, back into the pop culture beauty standard. Starting in the 1930s and continuing through the 1950s, weight gain tablets were promoted in magazines as a way to help women get curvier backsides — and curvier everything else, too. During this time, being called "skinny" was an insult, and flat butts were officially out.

In the early '40s, women were working outside of the home more than ever to fill gaps in the workforce left by the men fighting in WWII — so strong, angular bodies were idealized. However, when American soldiers began returning from WWII in the mid '40s, rounded hips and butts grew more popular and were encouraged as a visually pleasing way to welcome soldiers home.

Major curves were majorly in style throughout the 1950s. So much so, in fact, that hip and booty padding started to be sold in stores, and those weight gain ads that started showing up in the '30s were more popular than ever. Skinny women were shamed for their lack of shape and encouraged to take weight gain supplements as a way to fill out their figures.

The hourglass figure was pretty much worshiped, and that meant women were supposed to have boobs and booty to spare ... while somehow maintaining a tiny waist. (Sound familiar?) Marilyn Monroe and Liz Taylor set the standard for the "ideal" butt back in the '50s, and as I'm sure you already know, they were some pretty curvy ladies. White women continued to dominate mainstream pop culture.

Well, would you look at that — white women are still at the center of fashion and Hollywood's beauty ideal. As you can see, the "perfect butt" changed drastically from the '50s to the '60s. Part of this is due to the fact that more revealing fashion trends such as the mini skirt came into popularity in the 1960s, and it's easier to wear a mini skirt if your butt is smaller — but small butts also rose in popularity because the most popular model of the decade, Twiggy, was just super tiny all over.

Farrah Fawcett was "the babe" of 1970s mainstream pop culture, and since the Charlie's Angel had an athletic booty, "fit butts" were in, and slight curves started to be "OK" again. That said, women of the '70s were "supposed to" strive for lean bodies, and that meant lean butts, too.

However, one good thing about the '70s is the fact that, thanks to the black pride and "black is beautiful" movements of the '60s, the '70s saw the slight diversification of what pop culture started to consider the overall beauty "ideal." Beverly Johnson became the first black female to cover Vogue, and the gorgeous Darnella Thomas broke ground in her Charlie fragrance ad, too.

I don't know if it was all the influence of fitness pioneer Jane Fonda, (and the seemingly endless string of aerobic videos she inspired) — but like the 1970s, the 1980s praised and encouraged the athletic, female butt. However, the fitness craze of the 1980s encouraged more than just fit, lean butts and actually went one step further. Muscles on women started to be not only acceptable, but desirable, in the '80s — so muscular booties were considered desirable, too.

Supermodel butts (whether they were small and flat, small and round, or big-ish and round) were the ideal booty type in the 1990s. Back then, supermodels like Kate Moss and Elle Macpherson popularized the "waif" look, (a.k.a. "heroin chic") which basically means, in some eyes, the ideal '90s butt was super tiny and kind of flat. However, other famous supermodels of the '90s, like Cindy Crawford and Naomi Campbell, were also celebrated as having the ideal booty of the time — and while their butts weren't necessarily big, they were round enough to fill out hot pants with ease.

Additionally, the '90s ushered in a new era where the booties of women of color finally began to be idealized in mainstream pop culture. Tyra Banks made history when she became the first black female to be featured on the cover of Sports Illustrated in 1997, and artists like Jennifer Lopez and Sir Mix-A-Lot were able to do encourage big bootys as the ideal butt type in a very public way. Between the release of " Baby Got Back " in 1992 and JLo oozing sex appeal all over the mid to late '90s, big booties were considered sexy AF, too. So, basically, the '90s was all over the place where the ideal butt was concerned — and that's kind of awesome.

When Britney Spears, Beyonce, and Christina Aguilera started dominating the pop scene in the '00s, their toned, round, (but not super big) booties became the most idealized butts in pop culture. Of course, this booty standard still sucked, because the average woman doesn't get paid to do her squats like these celebrities undoubtedly did, but at least women weren't being encouraged to look like they were on a heroin diet anymore.

Over the past five years, successful women like Nicki Minaj and Kim Kardashian have used their influence, and their "assets" to help big butts finally come back around as the "ideal" booty type. (In fact, I think it's safe to say these two may have the most idealized butts of our time.) Most recently, Minaj's ode to big bootys in Anaconda , and Kardashian's controversial (and hugely problematic) Paper cover have publicly celebrated big butts, and the women who have them, in a way that mainstream pop culture hasn't seen for some time.

Personally, while I know my butt will never be as big as the current booty standard calls for, I still think it's pretty rad that big butts are making a comeback — because for decades women with big butts have been made to feel like they need to shrink themselves. However, if all the crazy changes in what we consider the "ideal" butt can teach us anything, it should be that the "perfect butt" doesn't exist — and trying to obtain it will only lead to body shaming and unhappiness. So take care of your body, do your squats if you want to, but don't stress out over getting the "perfect butt" — because you've already got it.