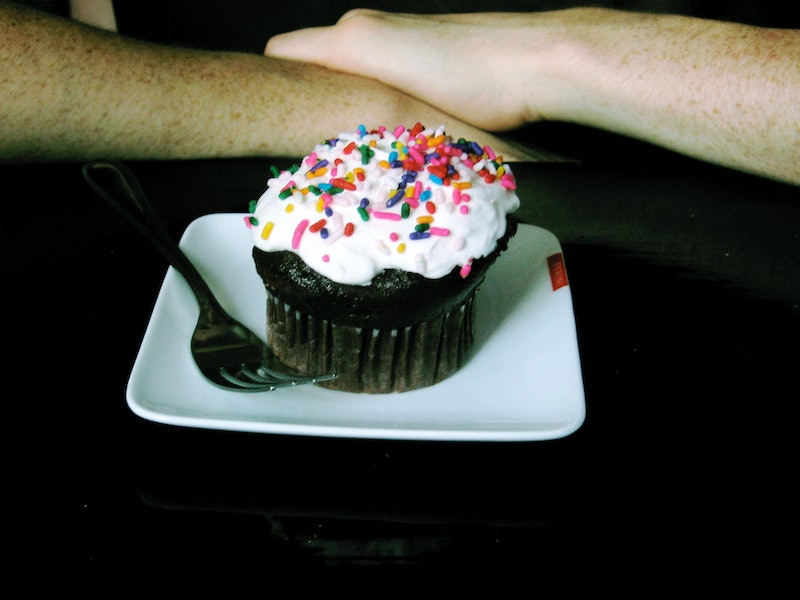 My epiphany came, like many of them do, while I was taking a dump. Specifically, it came while I was trying to take a dump in the woods after three years of struggling with gastrointestinal issues. It went something like this: you don't need to be gluten-free anymore. You just need to relax.

I first started experimenting with eating gluten-free about four years ago. The mother I babysat for at the time kept only gluten-free food in the house, and (I thought, somewhat comically) swore by it as the cure for all my ailments, (of which I had none at the time, except for the fact that I was living at home). Still, in my hometown of the Bay Area, eating gluten-free was becoming a serious trend, and I was intrigued to see what all the hype was about. When my then-boyfriend suggested we try cutting it out for a few weeks, "just as an experiment," I decided to humor him — and my own secret curiosity. I found that cutting out gluten those few weeks did make me feel a little lighter, a little flatter in the belly, but did nothing much more. I went back to eating normally.

When I moved back to New York City, I scored what everyone considered a "real" job as a homepage editor at a 24-hour news site. Although I knew I was fortunate to get the gig, it didn't play to my strengths, and I knew immediately that I'd made a mistake. Whether it was true or not, I felt like I was constantly failing, and faced every 2 p.m.-12 a.m. shift with a clenched jaw. The news was never uplifting; I became numb to the tragedy of school shootings and earthquakes. By the time I dragged my depressed self out of bed in late morning, I saw maybe one hour of sun before it was back to the office, where, staying locked to a computer screen throughout the night took precedence over a relaxing moment in the bathroom.

Almost immediately my stomach bloated so much that I couldn't fit into my pants, even though, strangely, I hadn't gained weight. I became chronically constipated every day, feeling like I had to go all the time, but only ever producing marbles whenever I tried.

I knew I was unhappy, but the opportunity was too big — I told myself I didn't have a choice and should suck it up. I recalled, perhaps too romantically, the light feeling of those weeks in the Bay Area, and wanted it back, desperately. After probiotics, fiber, and exercise failed to make a difference, I wondered if gluten was the culprit and began to cut it out.

To confirm my self-diagnosis — or to have the true problem revealed — I went from doctor to doctor, from food allergists to general practitioners to OB-GYNs to gastroenterologists to nutritionists. I was a woman — a woman who finally had health insurance — obsessed. I tested negative for celiac and wheat allergies. Each doctor told me roughly the same thing: they weren't sure what was wrong with me, and there wasn't much they could do. Each time, I would ask them, "Do you think I should still cut out gluten? I mean, if I feel like it's helping?" Clearly, they'd heard this line before, and would placate me with a dubious, "Sure, if it makes you feel better, why not? We don't know much about non-celiac gluten sensitivity yet, so it's hard to say." And with that prescribed shrug, I completely cut out pasta, bagels, pizza, cake, in the hopes that I might regain normal bowel movements and my old self's stomach.

It helped ... sort of. It was hard to say. Some days without gluten, I felt less bloated and could finally go to the bathroom; others, I couldn't.

I'd never suffered an eating disorder before. But clearly, cutting gluten out proved to be a major trigger for me.

I remained unhappy at my job, still felt bloated and constipated, and even gained a few pounds, though I was working out almost every day and eating "healthier" foods than ever. I began to hate my body. What I had usually considered one of my best assets — both in terms of how it looked, and what it could do — was betraying me. I couldn't feel when I was full or hungry anymore. I couldn't poop reliably. I would grab my stomach and pinch at it in anger. I'd deny my craving for a slice, then eat a bag of popcorn, two bowls of gluten-free cereal, and a bunch of fruit I didn't want instead. I'd restrict the foods I wanted all day, then stuff myself when I got home from work at 2 a.m. on foods I deemed "good," like raw vegetables and more popcorn. I began cutting out even more "bad" foods, like refined sugar and dairy.

Though I had a history of OCD, I'd never suffered an eating disorder before. But clearly, cutting gluten out proved to be a major trigger for me. Restricting such a major part of my diet left me with a constant feeling of being both in and out of control. I could never be sure, every time I ate out, if there was gluten in my food. Going gluten-free had triggered in me what I now see was orthorexia nervosa, a type of OCD-based eating disorder which literally translates to “fixation on righteous eating.” I read cookbooks like The Food Doctor and Clean Food with a sort of religious hope for salvation. My idea of heaven was to feel in accord with my body again.

By cutting out gluten, I was trying to honor my symptoms and respect whatever made me feel better, while, at the same time, judging myself for those very symptoms. I hated that I was both one of those "gluten-free people" and suffering from an eating disorder. It didn't match the picture I had of myself — as a feminist, a skeptic — and I hid it whenever possible, just like I had once hidden my OCD as a teen. It was shame compounded with more shame, as I nourished and punished myself with handful after handful of popcorn.

Some nights, after a few drinks, I'd break the diet and cave to a craving for gluten. I'd try to tell myself it was fine, that it wouldn't make me sick, because it was all in my head, right? And then, inevitably, the next day and the days after, I would find myself completely constipated once again. It was incredibly frustrating. I kept testing it because I suspected, like my polite friends, that gluten's effect on me was psychosomatic, but that didn't change the very real experience of its effect when I ate it.

The mind is a powerful thing, especially when it comes to people's digestive systems. Because I believed that gluten would make me bloated and constipated, it did.

And then, as if to mock me and everyone else in my predicament, that 2014 Australian study of 37 people with a self-reported gluten sensitivity came out — and went viral. When the study revealed that adding isolated (unknown) gluten to the subject's diets did not indeed lead to gastrointestinal distress, the Internet exploded with headlines like "Gluten Intolerance May Not Exist" and "New study: Gluten Sensitivity Is All In Your Head." I knew those headlines, and the snickers they encouraged, were directed at people like me.

But that didn't mean my experience of gluten's constipating effect wasn't "real." Would you say someone with depression isn't actually depressed if you found enough serotonin in their brain, but they were unable to get out of bed every day? The mind is a powerful thing, especially when it comes to people's digestive systems. Because I believed that gluten would make me bloated and constipated, it did.

I was still eating gluten-free when I finally found Jenna Hollenstein, an amazing nutritionist based in New York City, who has also written for Bustle on this very topic. Jenna was the first specialist I talked to who had once thought herself gluten-intolerant. She wasn't judgmental of me, and was interested in addressing the root of my stress.

I worked with Jenna over a few months on an elimination FODMAP diet, which cut out all foods that might be triggering my symptoms of bloating and constipation, then slowly added them back in. While I was nervous about what restricting even more foods from my diet might trigger, Jenna rightly asserted that what I needed — and had been unable to get — was a sense of control and a definitive answer as to what was causing my symptoms. She was right: Through eliminating nearly every food that could be triggering me, I found, to my own surprise, that I was able to stop fixating so much on simply blaming gluten.

Jenna also suggested tracking my cycle, which helped me make some sense of the fact that my symptoms seemed to ebb and flow no matter what I ate, depending on the week. I realized that (duh) my constipation and bloating were much worse the week before my period, so Jenna suggested not overdoing it on certain foods that can block you up during that week.

When the nearly 6-month elimination diet was done, I finally had definitive proof that no one ingredient actually appeared to be The Problem. The verdict was both happy and humbling, to say the least.

But Jenna also talked to me about something equally paradigm-shifting: giving myself the proper time to poop. She told me to keep a schedule, and to try to leave extra time in the morning to have my coffee at home and sit on the toilet in peace. "This is something men seem to have figured out that we tend to deny ourselves," she told me. "Haven't you noticed how guys go into the john with a magazine and don't come out till they're done? They don't worry about taking too long. They go and do their business, however long it takes."

I thought of my dad, and all the newspaper clippings he used to keep in the bathroom. I realized how, sometime during my induction into rapid-fire media world and my worrying about a boyfriend judging me, I'd stopped giving myself proper time to take a dump. Silly as it sounds, I began to see how allowing myself to poop — and talking openly about the fact that many people struggle with shame over this — could be a liberating, even radical act.

It was shortly after one of those meetings with Jenna that I found myself crouched in those aforementioned woods, worried about taking too long to poop. My then-boyfriend was talking on the phone by the trail's entrance, out of sight, but I was scared he was going to walk in on me. I felt my body clench up with worry. I can't. I'm not going to be able to out here. Determined to give myself time like Jenna said, I picked up a stick and played with it. I felt my fingers in the dirt. I allowed my body to relax. I sensed the ways in which, for the last few years of living in the city, I'd disconnected from this most natural of acts.

And then, squatting just like our ancestors did, I proceeded to take the best poop I had in years.