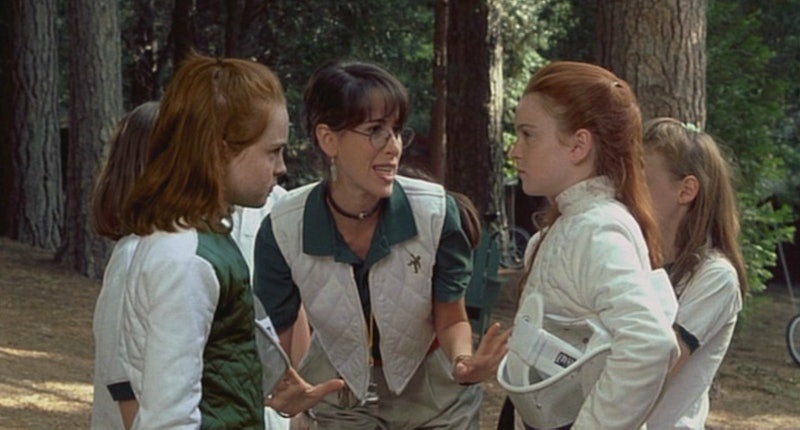 Ah, summer camp. Those were the days. The sun was hot, the lake was tepid, and the air was thick with mosquitos and hormones. But despite the less-glamorous aspects of the environment, summer camp was a pivotal experience in many a pre-adolescent's coming-of-age journey. For many people, camp was the first time they were away from home without their parents, making it an exploration in independence. For others, camp was the place they had their first kiss, first infatuation, and first heartbreak. For me, camp was the place that I learned that I hate tents and am really more a hotel kind of girl. Like I said, everyone's experience was different, and that's why there are so many summer camp-themed movies that'll bring you right back to your time away from home.

A ton of films came out in the '90s and '00s that recognized what a major role camp played in young lives of the era. Some of the films paid tribute to the innocent days of bug juice and lanyard bracelets, while others explored the more, uh, mature side of summer camp stays. But all of them reminded viewers of a time before taxes and deadlines and adult responsibilities, a time when camaraderie reigned and there was adventure around every corner. Here are 23 '90s and '00s summer camp movies that will bring out the kid in you.

Before Ben Stiller was a megalomaniac corporate gym owner in Dodgeball, he was the overzealous fitness mogul at a fat camp for boys in Heavyweights.

Lindsay Lohan rose to fame (and turned a generation onto the concept of combining Oreos and peanut butter) in this 1998 flick.

Wednesday and Pugsley go to camp — with disastrous results — in this sequel to The Addams Family.

If you remember the line about band camp in the first American Pie, you won't be at all surprised by the things that transpire in this movie.

5. But I'm A Cheerleader

This comedy revolves around a girl who is sent to a "rehab" camp by her parents, who fear that she's a lesbian.

This cult classic accumulated such a fan following over the years that Netflix finally made a prequel miniseries to it.

Alan Arkin plays a former camp director who brings a group of now-grown campers back for a 20-year reunion. The result is a lot of heartwarming nostalgia.

Demi Lovato and the Jonas Brothers star in this well-known DCOM about a summer camp for aspiring musicians.

Candace Cameron and Jennifer Aniston both have major roles in this 1990 movie all about young love at a summer camp.

In this 2009 comedy, two guys scheme their way out of football camp and into cheerleading camp in order to get girls.

This 1995 adaptation of the beloved children's books follows the members of "The Baby-Sitters Club" as they try to run a summer day camp for kids.

A bunch of kids rally together to create a secret adult-free summer camp in this 1994 flick.

The focus of this documentary is Stagedoor Manor Summer Camp, a performing arts camp in the Catskill that has a reputation for churning out young stars.

This 2003 movie was actually based on the director's own experiences at Stagedoor Manor. It was also Anna Kendrick's first film.

After the camp director gets truck by lightning, the teenager counselors of Camp Bleeding Dove take over. Romance and hijinks aplenty ensue.

John Cusack is the unseen narrator of this indie movie, in which a young boy called Fetus goes to summer camp and has to deal with the many conflicts of young friendship and romance.

This 1994 kids' comedy follows the adventures of a group of misfits who all end up in the same "loser" bunk.

If you liked 2000's The Emperor's New Groove, you might get a kick out of this 2005 sequel, which finds Kronk as a counselor at Camp Chippamunka.

This independent movie portrays a Jewish summer camp in the 1950s and features stars such as Jerry Stiller and Jason Biggs.

Leslie Nielson schemes to save a summer camp from being turned into a health resort in this 1997 comedy.

After a crazy name mix-up, a rich boy accidentally ends up at a summertime juvenile detention center while a poorly-behaved preteen ends up at a luxurious summer camp.

The final film in the Meatballs franchise didn't do so hot in terms of reviews, but is necessary viewing for anyone who loved the original.

It may not be physically possible to go back to your summer camp days, but at least these movies can help you take a trip down memory lane. And whenever you find yourself really wishing that you could return to being a kid at summer camp, just remember that bellinis and your queen bed are a lot better than bug juice and a sleeping bag.