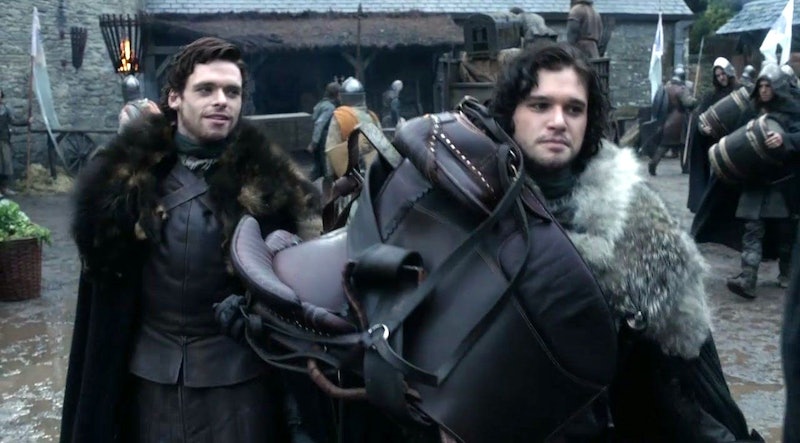 As the plot continues to thicken on Game of Thrones, there's a certain conspiracy theory currently making the rounds — The Grand Northern Conspiracy, to be exact. It's fairly complex and involved, but the crux of it lies on this one big question: Did Robb Stark secretly legitimize Jon Snow? If Robb named Jon as his official heir, it could mean that he's got the covert support of many of the Northern lords — which basically spells out major trouble for Ramsay Bolton.

The Grand Northern Conspiracy theory's been around for years now, and the World Wide Web is filled with extremely well-researched essays and thinkpieces on the matter (one standout example is a full 44 pages). Now that it looks like we'll be spending a good chunk of Season 6 in the North, the long-popular theory been pushed to the forefront once more.

What exactly does it entail, though? Well, as its name might suggest, The Grand Northern Conspiracy outlines the theory that a lot of the Northern lords have been secretly plotting to put a Stark back in Winterfell ever since the Freys and the Boltons royally screwed them over at the Red Wedding. And which Stark, exactly? In the books, Arya, Sansa, Bran, and Rickon are all presumed dead — which only leaves a certain bastard half brother left to regain his rightful title of Warden of the North. The fact that he's not a trueborn Stark weakens his claim, which is where Robb comes in. Many believe he legitimized his half brother not long before his untimely death.

This particular part of the theory has its roots in A Storm of Swords — there's a certain scene where Robb and Catelyn discuss his heir. Sansa was Catelyn's first choice, though Robb quickly nixes that, on account of her marriage to Tyrion Lannister at the time. Catelyn offers up other suggestions, but Robb stands firm in his wish for Jon to be his successor. We don't exactly get to see him draw up the last will and testament right there on the spot, but many believe that happened behind the scenes, in the company of a few key lords. Theory has it, those same lords have been sitting on this information since before the Red Wedding — and have been plotting to get Jon into Winterfell ever since.

Most of the evidence behind the theory comes from the books, but it has been referenced on the show — remember the old lady who told Sansa, "The North remembers?" That seems like a pretty strong hint that there's some kind of anti-Bolton uprising brewing, and it wasn't exactly a singularity (Stannis also showed Jon a letter from House Mormont, claiming their king was a Stark).

Really, all of this seems to fit in pretty perfectly with where we are on the show right now — with Jon and Sansa set to go head to head with Ramsay (in an event fondly nicknamed "The Battle of the Bastards," or "Snowbowl"), surprise support from some of their father's (and brother's) loyal lords could make all the difference in the world. Add in surprise legitimization for Jon Snow, and we're really cooking with gas — though Sansa Stark as Wardeness of the North would be equally awesome.

On the show, wild child Rickon's also at play, which could also be another key part of the conspiracy — after all, ever since Rickon appeared back on the scene, fans have been wondering if he's part of some larger plot. After all, Osha (RIP) and Smalljon Umber acted suspicious in Ramsay's presence, and of course, there's also the fact that Shaggydog's alleged head seemed far too small for that of a full-grown direwolf.

At any rate, it certainly feels like we're headed for something big — Sansa and Jon are headed for Winterfell, where Rickon just happens to be held prisoner, and Bran... well, he's there in spirit (kind of literally). Arya's still way off on another continent and will likely stay there for the forseeable future, but still: Three out of five Starks converging at Winterfell ain't bad, especially after how long it's been since they've all been in one room — and since the Grand Northern Conspiracy ultimately means justice for the betrayed Starks, finally getting most of them all in one place feels like a big step in the right direction.

Come on, Starks (and Northern Lords): Let's all band together and give Ramsay Bolton the boot he so sorely deserves!