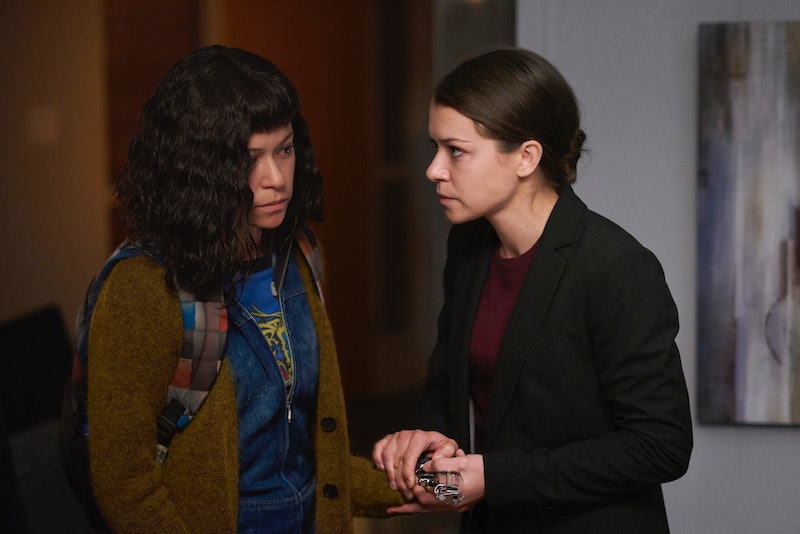 If the overarching theme of Orphan Black Season 4 has been "back to basics," then this week's episode, "The Scandal Of Altruism," definitely delivered on that promise. Not only did we see the (literal) fiery end of cloning as we know it, we also learned the solution to a mystery that has haunted the show since the opening moments of its first episode: Why did Beth kill herself?

Considering the entire events of the series happened because Sarah saw the troubled cop step in front of a train, we've never had a satisfactory answer to that question. For years, viewers just assumed some sort of vague reasoning along the lines of the fact that the truth of her existence must have driven Beth to the edge. But now we know the truth… and it turns out that Beth had a much more specific (and selfless) reason for taking her own life.

"The Scandal Of Altruism" revealed that at some point in Detective Childs' investigation into Neolution, she had met Evie Choe — an encounter the flashbacks earlier this season neglected to show us. Knowing that Beth wanted to bring down the organization, Evie pointed Beth towards its head: Susan Duncan. But what Beth didn't know was that Susan wasn't her enemy; in fact, she loved all of the clones like her own children. Evie hadn't given up Susan to help Beth… she had given her up because she wanted Beth to kill Susan so Evie could take her place.

When Beth realized the truth, she spared Susan and beat up Evie (hence the blood on her hands). But before she could finish off the devious geneticist for good, Evie revealed the ugly truth: Beth now knew too much, and Dyad wouldn't hesitate to eliminate that loose end by killing her and everyone she loved: her sisters, Art, Paul, everyone in her life. And so Beth went home, washed her hands, cut up the Brightborn card, said goodbye to M.K. — and threw herself in front of a train. Not because she was crazy or because she couldn't handle the truth, but as a heroic act to save the people she loved.

So now, four years after we watched her take her own life, we finally know the answer: Beth died to prevent another Helsinki.