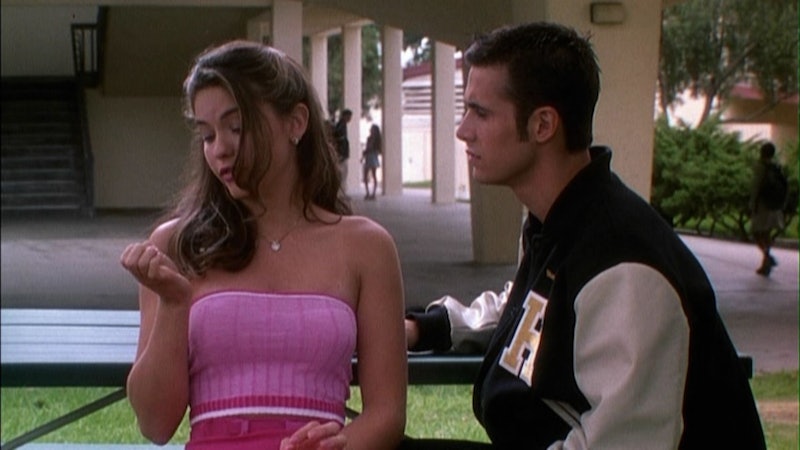 Look, not everything about the '90s is puppy dogs and rainbows. We look back with a lot of nostalgia for a time we deem "better" than now, but there was a lot of stuff we did back that was kind of horrible. Yes, even romantic things. Our idea of romance in the '90s was skewed towards the "man imposes on woman", and now that feminism is such a huge conversation, a lot of the things you thought were romantic in the '90s just wouldn't fly today. Even some of your favorite '90s rom com couples were kind of creepy.

There are some '90s dating trends we should bring back, like talking to each other on the phone rather than incessantly texting, but there's a lot that we should be really glad we left behind too. Between all the bets dudes were making over girls, all the Cinderella stories, and all the persistence despite being told no, romance in the '90s was defined by some pretty heteronormative, misogynistic ideas. And let's not even get started on the potential to fall in love with your step brother à la Clueless. Here are 13 things we thought were super romantic in the '90s that just seem kind of creepy now.

1. Driving By Someone's House/Place Of Work/School

Yes, we actually thought it was romantic to stalk someone in the '90s. Driving by somewhere we thought our crush might be was seen as an act of passion, and not what it is: being really creepy.

2. Writing Your First Name With Their Last Name On All Your School Books

This was normally done without your crush knowing, and regardless, you thought it was super romantic to mark yourself as their future property. It's also just creepy to arrange a wedding to someone who might not even know you like them.

3. Running Into An Airport To Stop Someone From Leaving

Airport romance was big in the '90s. Post 9/11, it's definitely not OK to run through security at the airport. Aside from that, it's super imposing and entitled to just assume someone wants you to stop them from getting on a flight they paid for, to a destination they're probably expected in.

4. Leaving Anonymous Notes For Someone

This is the exact premise of the slasher movie I Know What You Did Last Summer, but we still found it romantic.

5. Turning Up Unannounced To Someone's House To Throw Rocks At Their Window

Again, there was a lot of entitlement and turning up unannounced in the '90s, and we thought this was totally normal and romantic and not creepy and stalker-y. We didn't consider that maybe sometimes we wanted to be left alone, and not have people chasing us when we we're just trying to sleep.

6. Calling Someone And Not Saying Anything When They Picked Up

If you displayed a crush by calling someone and hanging up without saying anything after they answered and thought that was romantic, then you probably never really thought about creepy serial killer behavior.

7. Using A Fake Chat Name Online To Get To Know Them Better

I mean it's basically catfishing, but we thought it was hot in the '90s, before we knew what catfishing was.

Psst, check out our podcast, The Chat Room, for talk about all things internet and nostalgia.

8. Having Your Friends Do The Talking For You

9. A Friend Pursuing You Relentlessly Until You Finally Realize They're "The One"

It makes sense that the friendzone was invented in the '90s. We thought it was super romantic for a guy "friend" to relentlessly wait for you, try to woo you, and generally not listen to you saying "no," even though that's really creepy behavior.

In the '90s it was sweet if a guy changed you to be sexier and more desirable. I guess self-love wasn't really a thing yet...

11. The Idea Of "I Don't Care 'Bout Anything But You" From The Cardigan's "Lovefool"

We were big into unrequited infatuation in the '90s, and it meant that we were willing to sacrifice a lot for "love". We now know this is not only creepy, but unhealthy. Thankfully.

12. Falling In Love With Just A Glance

Following Romeo + Juliet, the ideal romantic situation in the '90s was falling in love with just one glance. Never mind knowing someone's personality, it was more than enough just to see them for a split second and then be willing to die for them. Ah, romance.

13. Someone Making A Bet Over You But Falling In Love Despite It

It was just so cute every time a guy in a movie made a disgusting bet over a girl with his disgusting friends, and fell for her instead, wasn't it?