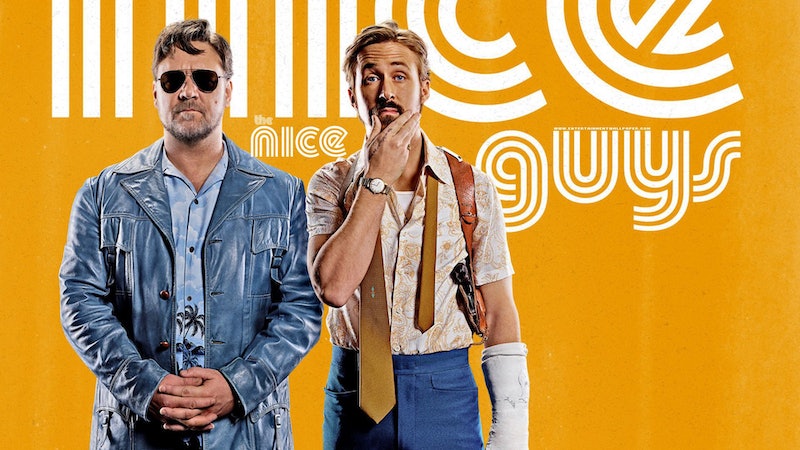 There are a ton of reasons to get excited about The Nice Guys. For starters, the comedy thriller, in theaters May 20, stars Ryan Gosling and Russell Crowe (power duo, anyone?). Second, the movie is written and directed by Shane Black, who also directed Iron Man 3 and Kiss Kiss Bang Bang and is known for his expertise with action thrillers. Additionally, The Nice Guys is hitting theaters almost a month before its original scheduled release date of June 17, so you're getting an early dose of Gosling-Crowe goodness. And just in case you needed any more reasons to be pumped about the movie, The Nice Guys soundtrack is simply fantastic.

The movie takes place in the 1970s, and the soundtrack captures the vibe of the era with a compilation of well-known '70s hits. An additional perk is that you don't have to wait to get your hands on the album, as The Nice Guys soundtrack is already available on digital retailers like iTunes and Amazon (you can also get it in audio CD format through the latter). You'll hear tracks from Earth, Wind & Fire, The Temptations, Kiss, and many more, making this soundtrack a major treat for any fan of '70s music. If you don't believe me, take a look at the track listing below:

Crazy good '70s nostalgia, amirite? And the throwback to the feel-good-decade doesn't end there; there is also a '70s-inspired "collector's edition" vinyl version of the soundtrack available on iam8bit. But vinyl enthusiasts beware: this is not your grandmother's LP. On the contrary, the collector's edition of the soundtrack is very much NSFW, even though the music is the same. You see, in addition to two two-sided colored vinyl records featuring the aforementioned tracks, the set also comes with adult-only XXX wrap, a double-sided pin-up poster, a nude 3D centerfold, and glasses with which to stare at said centerfold. Yes, seriously.

The collector's edition also comes with some non-pornographic extras, too. Included are liner notes by Shane Black, a The Nice Guys business card, and a download code for the digital version of the soundtrack. So even if the '70s-style nudie stuff isn't your jam, there's still some incentive to snag the collector's edition if you're a fan of The Nice Guys and/or a vinyl connoisseur.

Regardless of what format you get it in, The Nice Guys soundtrack is a perfect accompaniment to the new movie. Smooth music, a thrilling ride through 1970s LA, and two of your favorite A-listers side by side... what's not to love?